Rotten Tomatoes has become one of the most influential sites for consumers when deciding which movie they are going to spend their hard-earned money on. With movie ticket prices steadily increasing over the years, customers have become more and more selective in their choice of film. Most people I know, myself included, always check a movie's score on Rotten Tomatoes to see if it should be considered an option. If the movie is rated as "rotten", chances are, very few people will ever go see that movie.  On the other hand, there are movies like Get Out, which was not received well from the trailers.  When people saw that it received 100% on Rotten Tomatoes, however, they flocked to the theaters to see it.

According to a New York Times article written by Brooks Barnes in early September of 2017 titled "Attacked by Rotten Tomatoes," many studio executives blame Rotten Tomatoes  for the movie industry's slowest summer in 20 years; while Rotten Tomatoes has grown 32% in May 2017 itself.  Brett Ratner, a director, producer, and film financier said to Barnes that his goal is to "destroy" the site.

1 . Does critic or audience score have a bigger impact on box office profits?

2. What characteristics show up the most in the Top 100 Movies?

3. Can I use Rotten Tomatoes to predict how much a recently released money will make?

4. Can I create a way for movie companies to get an idea of where they need to focus their efforts in order  make higher rated and  profitable movies?

In order to achieve my goal, I decided to look at the "Top 100 Movies" on the site from 1950-2018.  I wanted to look at the characteristics of each of these films to see if could uncover any patterns in the movies that received the highest ratings and by extension, box-office profits.  However, only looking at the titles  and scores of the top rated movies would not give me much insight into why these movies received their particular rating. Therefore, I would need  figure out a way to go into the detailed page of each movie.  I used Scrapy in Python to write a spider that would help me collect all the information that I needed.

Let's first define the variables I scraped for analysis so we have a clear picture of the data:

Scraping the "Top 100 Movies" pages were straightforward since the only difference between the URLs' was the specific year.  I then used XPath Selectors to select the specific elements I wanted from the page. The data I scraped was exported into two separate files. One file had all the Top 100 Movies with their year and the URL ID for each movie. I was then able to use this ID to then go into each page and get the details that I needed.The obstacles I ran into while scraping mostly occurred on the specific movies' page. I had originally used XPaths with the corresponding index number for each variable in the Description box (Box Office Profits, Genre, Runtime, and Rating). After letting the spider run for a while, I realized half  of my values for this section were in the wrong columns. After examining the website and my code, I realized it was because the variables  I wanted were not present on every page. For example, we can see below that the movie on top has Box Office Profits and Runtime. But, the movie below it does not contain either.

This was a very common occurrence with many different combinations of their order.  As a result, I wrote an if-else statement to detect whether the word before the value I wanted was Box Office or Runtime so that I would be sure to only get the variables I needed.

Once I was fixed this error, I was able to move onto one the most important and laborious tasks, data cleaning.

I decided to use Pandas in Python to clean up the data.  I removed extraneous white spaces and characters from my string columns and removed non-numeric symbols from my numeric columns.  Once I cleaned up the title columns in both csv files, I was able to merge them.  Next,  I checked the column and rows for missing values.  I found that I had about 900 observations with missing values for Box Office Profits and 10 in Runtime. Since Box Office Profits was the dependent variable I was concerned with, I realized my current data set would not be sufficient for my goal.  In order continue my research and fill in my missing values, I used a data set from The Numbers containing about 5,000 movies and their domestic box-office profits.  After I merged this data set by the titles that were in mine, I was able to fill in all but 13 cells. Since there were only a few missing cells left, I dropped those observations.  I then used the 'caret' package and KNN Imputation to impute the missing values in Runtime. Now we are ready to analyze!

To investigate my research questions, I wanted to create a linear regression model to test the importance of the variables and then predict profits.  For this part of the project, I chose to do my analysis in R. I first looked at all the numeric columns to see if there was any multicollinearity.  I used the vifCor function from 'usdm' package to look at the Variance Inflation Factor since it measures how much the coefficient estimates are inflated when multicollinearity exists. From this I could see that there were no variables with significant multicollinearity.  I also  created a plot that showed bivariate scatterplots with a fitted line. 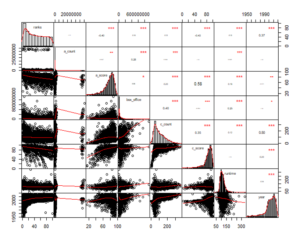 In order to create a multiple linear regression model, I first had to create dummy variables for my categorical variables. Then, I partitioned my data into a training set, consisting of 75% of the data set, and a test set.  I chose to use the 'Boruta' package to select my feature attributes instead of caret because it can handle the categorical variables much better.  Boruta is a wrapper algorithim around Random Forest that creates shuffled copies of the predictors. It tests the global variable importance of each feature as it iterates through all of the random copies it made  until it removes all features deemed unimportant.  After running this algorithm multiple times,  I received the following graph showing the most important attributes. 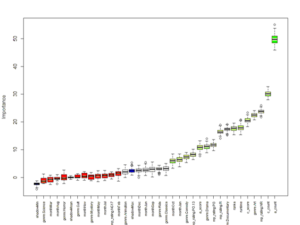 From this we can see that Boruta found the Audience Review Count was the important factor in predicting box office prices. This makes sense since the more reviews there are for a movie, the more people that saw it.

This graph also shows that Critic Review Counts, an R-rating, Artistic genre,  and runtime were the next top four attributes when it comes to box office profits.  Next,  I used the predictors to train and fit a linear regression. The summary of the regression showed a significant F-stat with a very small p-value. Therefore,  we can accept that factors from Rotten Tomatoes are important when considering box office profits.  The most important attributes from this linear regression model are shown below. 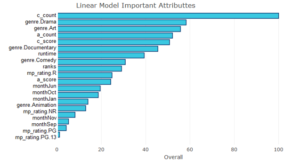 Rotten Tomatoes is the great way for movie companies to get into the mind of the consumer.  From the the initial graph of important attributes it is clear that higher box office profits is positively correlated with higher box office profits. However, the regression analysis shows that the critic count is most important. This leads me to believe I need to conduct further testing between this relationship. This could also mean there is a cause and effect relationship between these two variables. If there is a high critic review count, more people would be inclined to see the movie, therefore increasing the amount of audience reviews. Either way, this relationship needs to be examined further.  Besides ratings, the characteristics that were most frequently correlated with high profits were Drama, Art, Runtime, Documentary, Comedy, R-rating.  These attributes can help producers have an idea of what exactly brings in the money.  For example. an R-rated comedy is likely to bring in more money than a PG-rated animation movie.

Since the total number of movies in all Top 100 lists was less than 3,000, I would like to scrape beyond these lists to all the Certified Fresh movies. After running further tests and fine-tuning my model I believe this could be a valuable tool for movie businesses. Instead of Rotten Tomatoes being an enemy to the movie industry, it can be their most profitable tool.