Senti-Meter applied to US Governors

What do you measure with a senti-meter? Sentiments, of course. In recent years, social media outlets have become a platform on which anyone can express emotions publicly. As per the information posted on Pew Research Center, 68 % of US Adults use Facebook, and about 21 % use Twitter. Social Media platforms can be viewed as vast reservoirs filled with information on human emotions. The purpose of this web scraping project is to assess if tweets could be used to measure the approval ratings of US Governors. The main objectives are as follows:

The subsequent sections present the methodology including which data in the tweets are extracted, visualized and subsequently analyzed to come up with a sentiment score used to rank every governor.

The methodology employed in this study is summarized in Figure-1. The first part of the study was focused on scraping tweets. Although, Twitter provides tweets extraction using API, it poses rate limits on a per user basis. Hence, a decision was made to use Selenium for web scraping due to its reliability even though it can be slow at times. To filter out irrelevant tweets from individuals with similar names as the governors, the tweets were sampled only if they had a reference to twitter verified @Governor handle.

For example, the official Twitter handle for the governor of New Jersey is @GovChristie. Once the Twitter handle was identified, it was used as the Twitter search term, and the resulting Uniform Resource Locator (URL) was used to scrape the tweets pertaining to the Governor of New Jersey. Tweets were not directly read from @Governor handle since this may be overwhelmingly positive or neutral.

A similar process was adapted for the governors of the remaining 49 states. The objective was to extract roughly about 50,000 tweets (1000 tweets per governor and 50 states), but the program ended up scraping a total of 43,737 tweets (see Figure-2). This is partly because some of the @Governor handles were not very active on Twitter and generated fewer than 1000 tweets. The extracted tweets were saved in a csv file with a tag name identifying each governor. 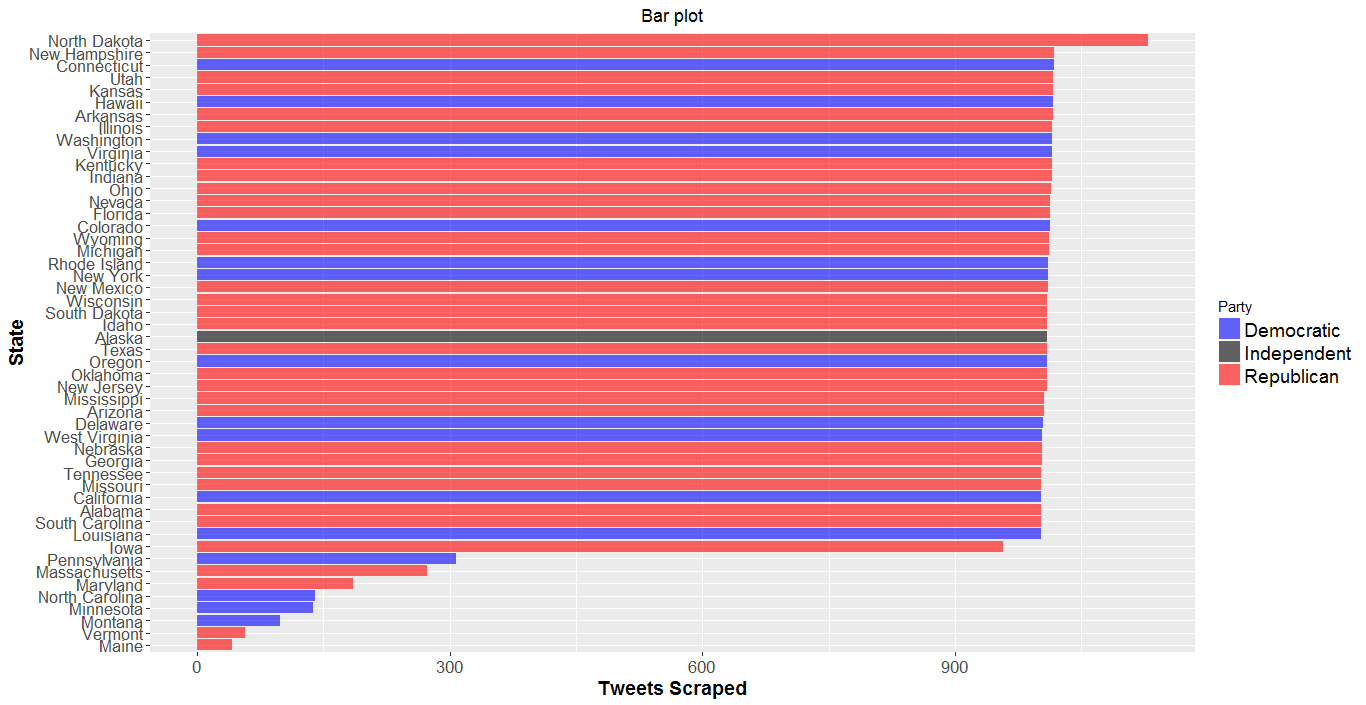 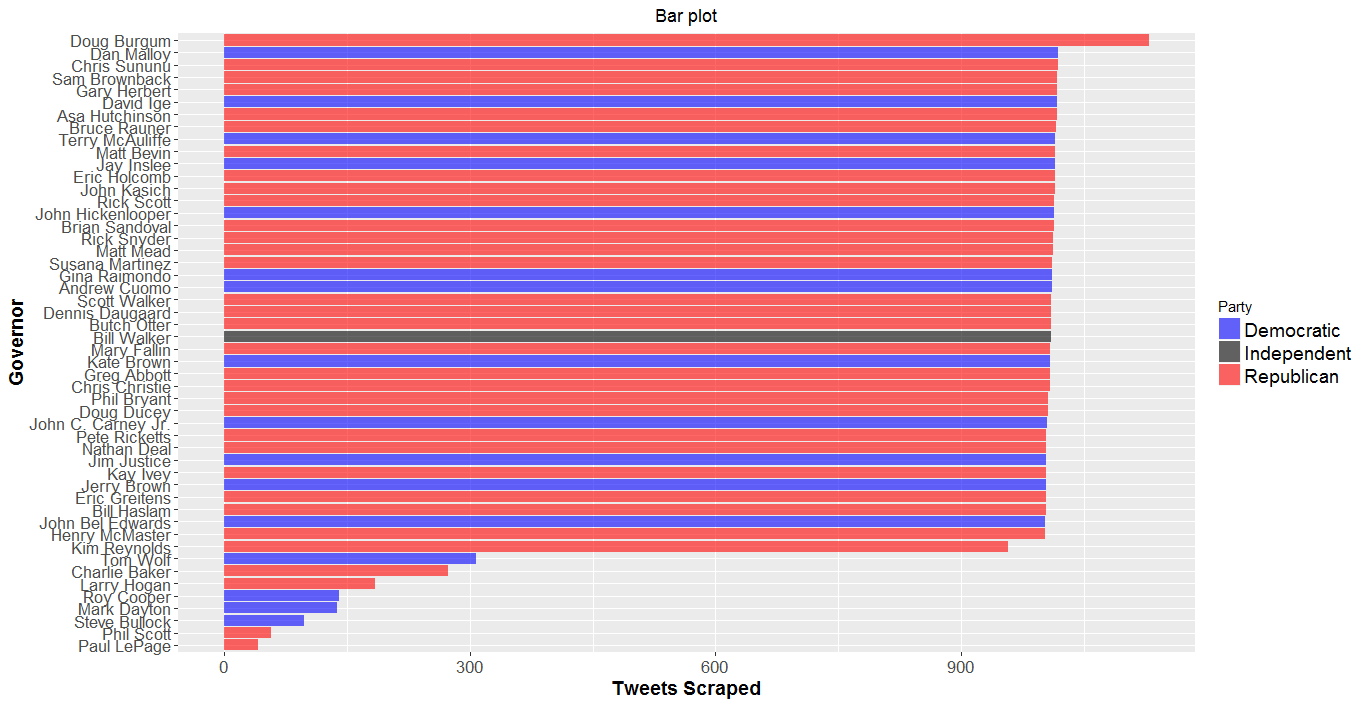 Once the data scraping was complete, postprocessing (Sentiment Analysis and Data Visualization) of the data was done on R-Studio. For the Sentiment Analysis, each tweet was cleaned up (using the functions ‘gsub’, ‘tolower’, ‘str_split’) and the individual words were matched with a word repository [1,2] with approximately 2006 positive and 4784 negative words (see Figure-3) to obtain a sentiment score [+1 if positive, 0 if neutral and -1 if negative]. For example, the sentiment analysis function would return the following scores (see TABLE-1)— 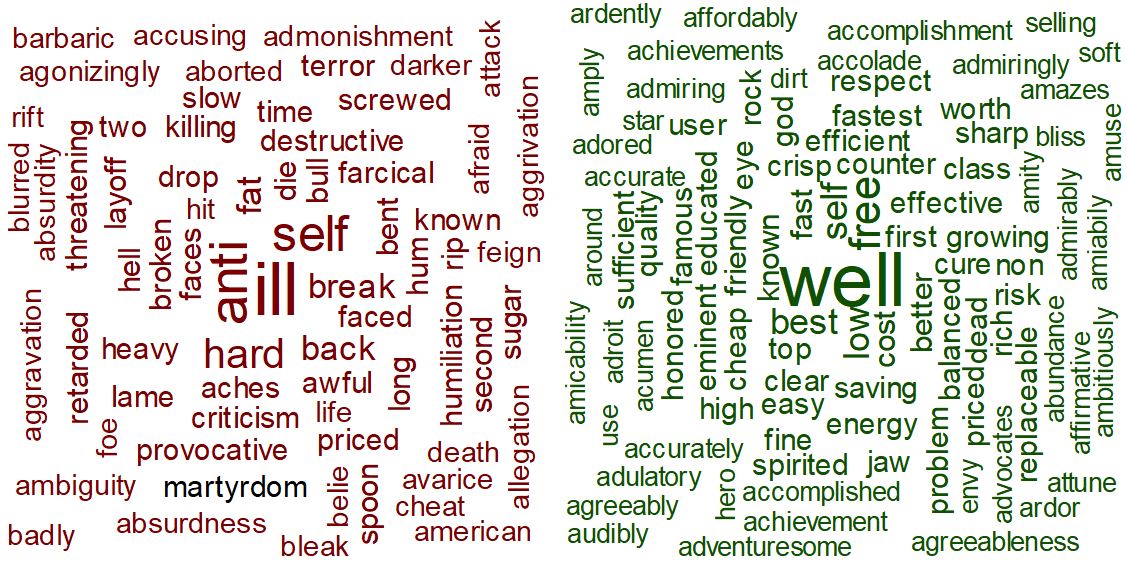 Figure-3: Some of the positive and negative words included in the word repository

Several visualization tools are employed to better understand the effect of each variable on the sentiment score and are discussed as follows: 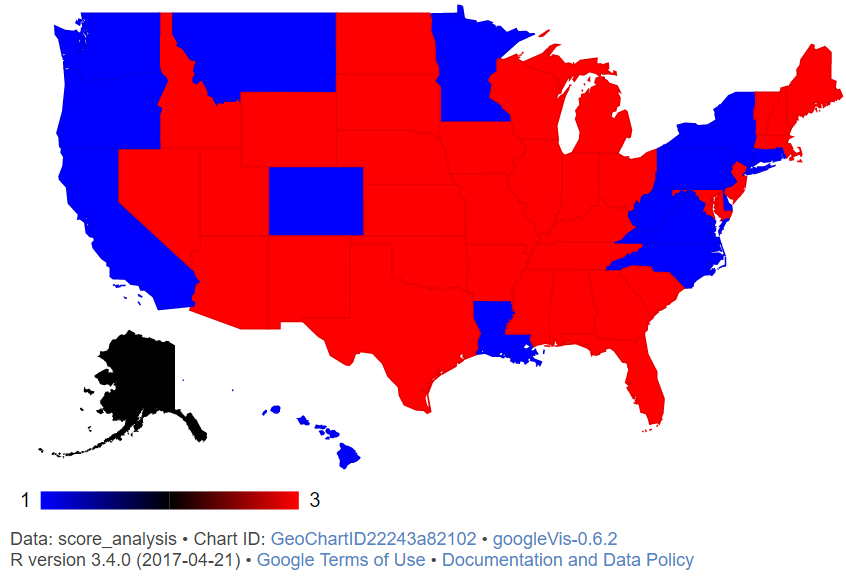 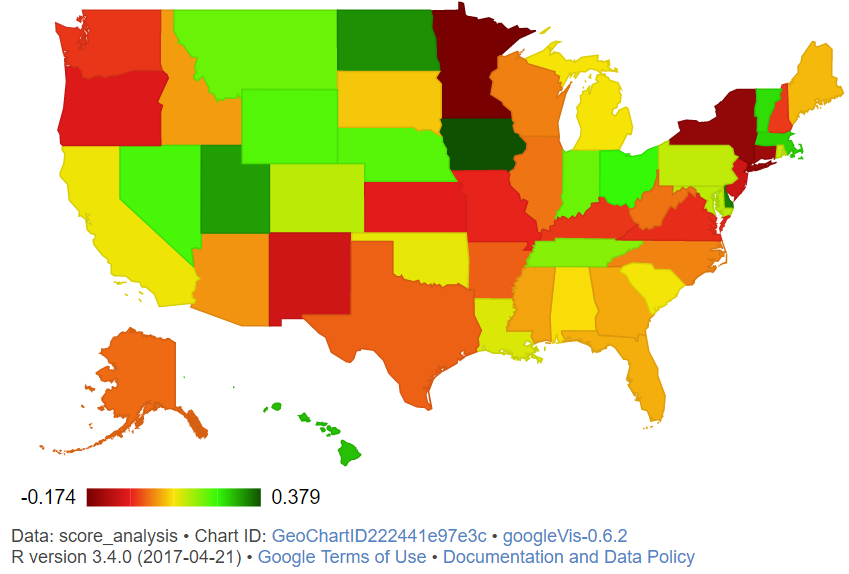 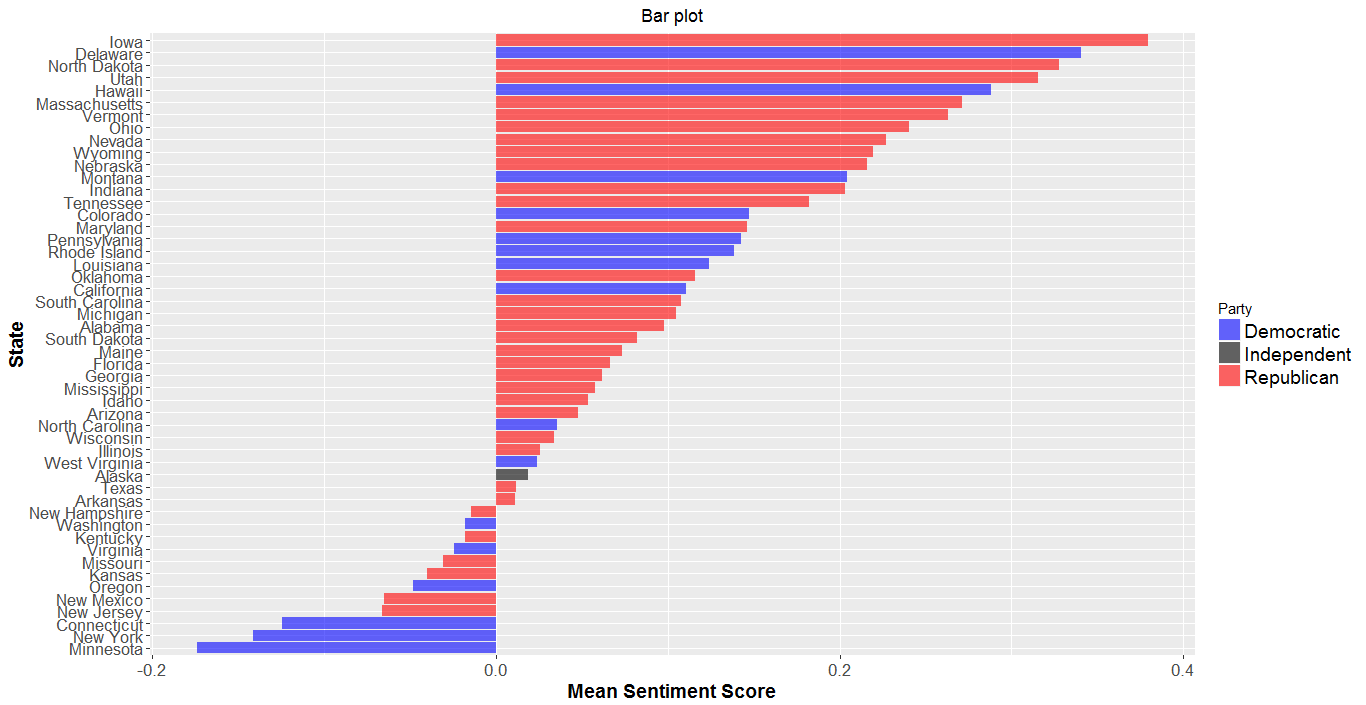 c) Effect of age, gender and party affiliation: With the complete data at our disposal, it is now possible to seek further insight on performance of the governors as a function of various groups [age, party affiliation (Democratic, Independent, Republican) and gender (Male, Female)] as seen in the box plots (Figures-7a,b,c). Under the assumptions of homoscedasticity, sampling independence and normality an ANOVA test was conducted with a null hypothesis claiming similarity between the means of mean sentiment scores between various groups. In each case, the resulting p-value was significantly greater than 0.05, thereby failing to reject the null hypothesis. 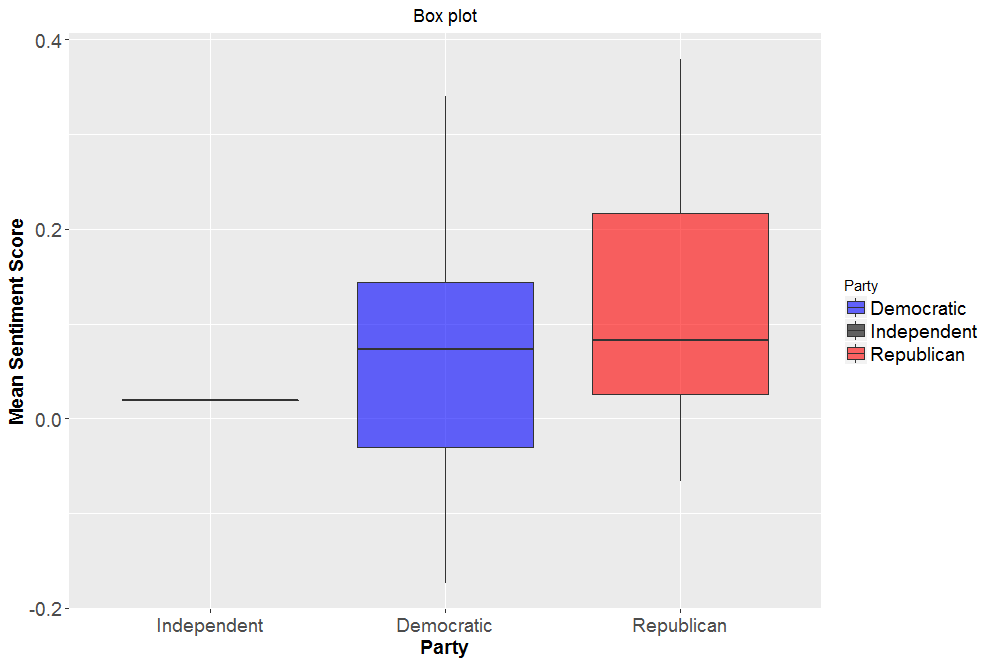 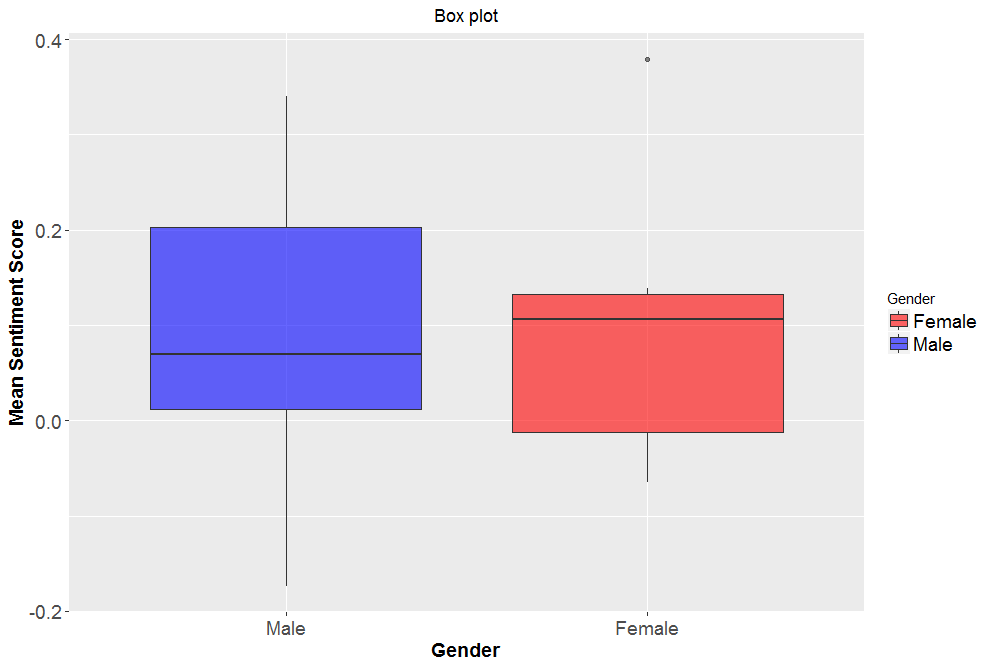 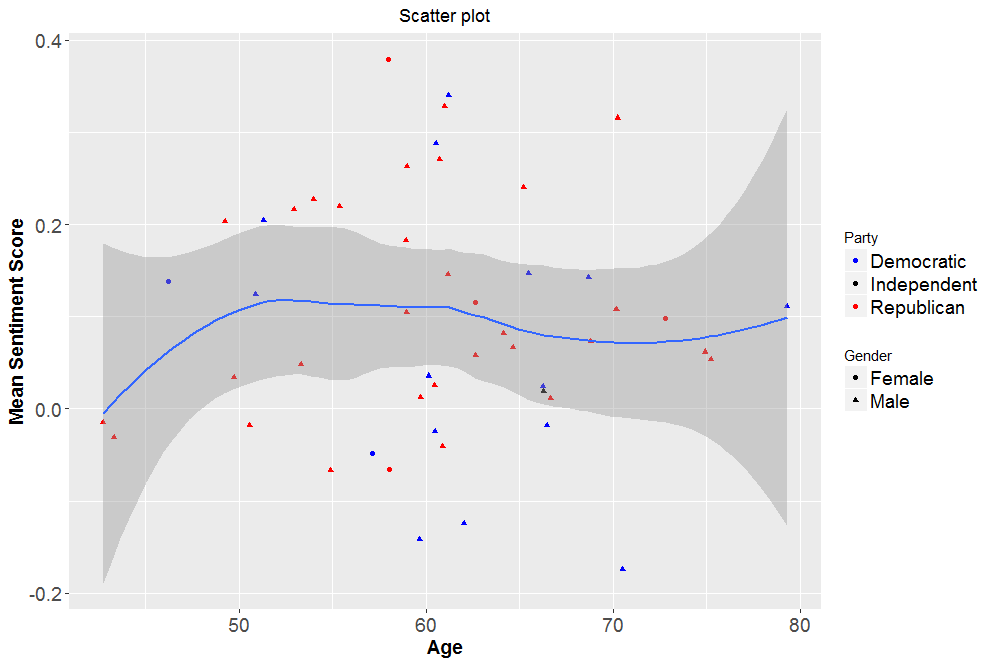 d) Analysis on the best and worst scores: The stage is now set to examine the tweets of governors with the highest and lowest sentiment scores. For the sake of this blog post, the focus will be only on the tweets of top three and bottom three governors (Even though Minnesota was at the bottom of the list in terms of the sentiment score, it is excluded from discussion in this section since the total number of tweets scraped was only 138, indicating that the sample size may not be representative when compared to other governors).

The resulting word cloud (minimum frequency=25 words) and the distribution of sentiment scores for these governors is plotted in Figure-8. It is interesting focus on the second tallest skyscraper (tower-2) in the distribution. Clearly, for the top governors, tower-2 is on the right side (positive) of zero and for the governors at the bottom, tower-2 is on the left of zero (negative). 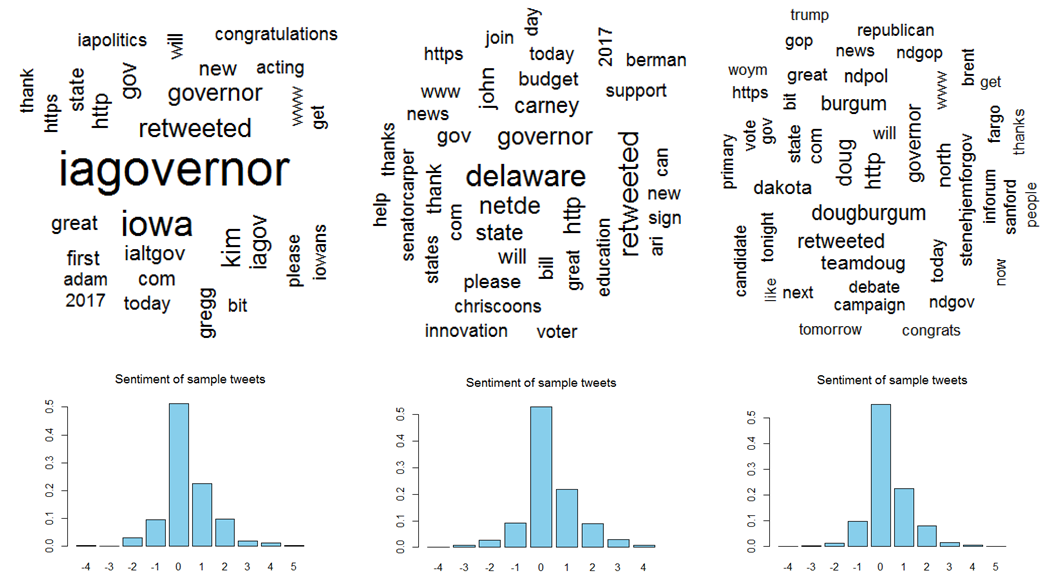 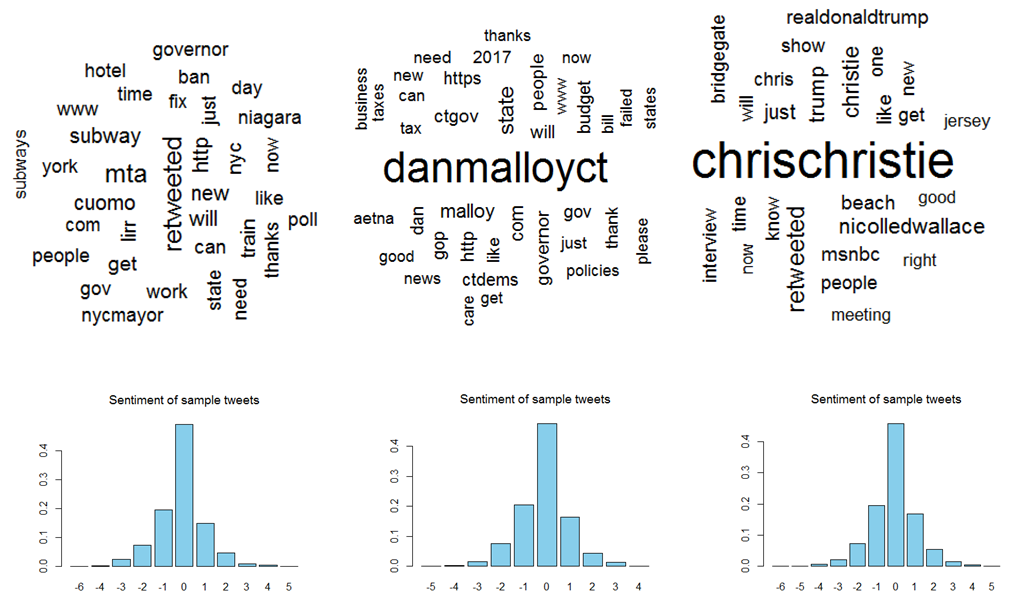 e) Keyword search: Using the tweets scraped, it is possible to analyze the specific issues pertinent to individual states. The tweets were mined for four key words: health, tax, education and jobs. The results for the top three states are summarized in TABLE-2. From the analysis, it appears that while Ohio and Kentucky care most about health, Kansas and Idaho are focused on tax. Similarly, education is a high priority to Oklahoma, whereas Alabama and Michigan residents are focused on jobs.

TABLE-2: Keywords that are important to individual states 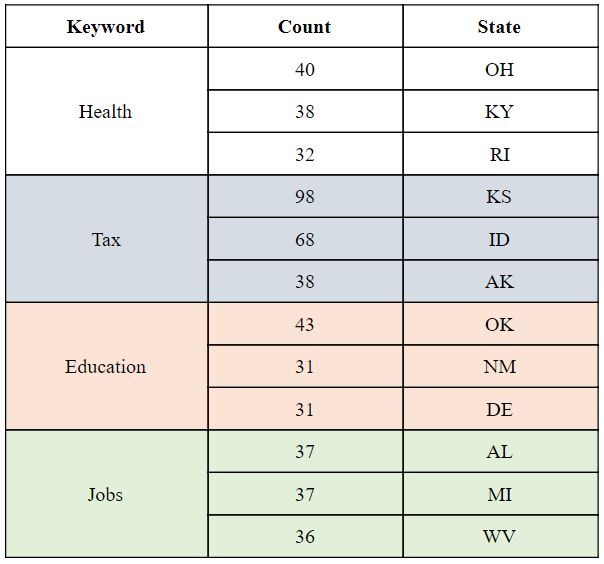 f) Rankings based on sentiment score and comparison to Morning Consult: TABLE-3 and TABLE-4 highlight the top-10 and bottom-10 list, respectively based on the Mean Sentiment Score. Also included is the governor approval rankings based on an independent study by Morning Consult, who surveyed 195,704 registered U.S. voters from April 1 through July 10 to determine these ranks. It is interesting to note that there is an overlap of 60 % on the top-10 list between Morning Consult and the current study based on tweets. Along similar lines, there is a 30 % overlap in the bottom-10 list with two other rankings being very close. 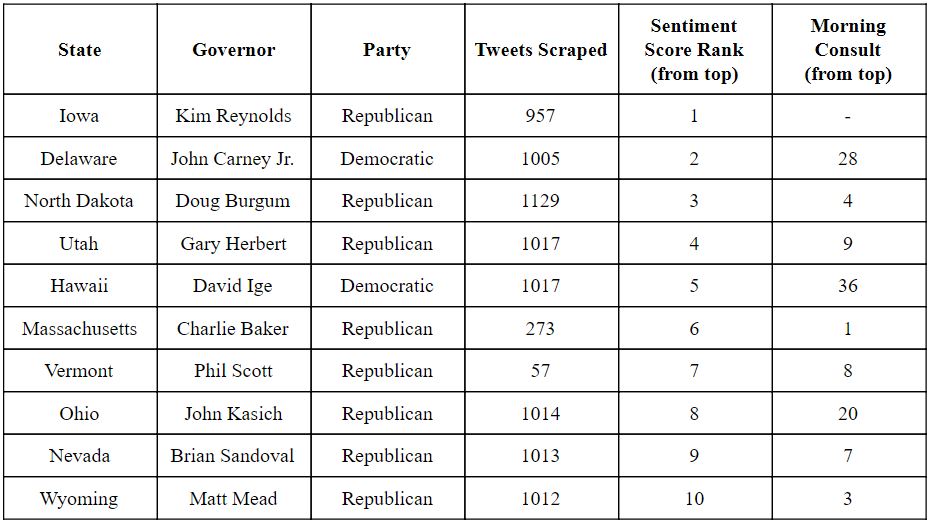 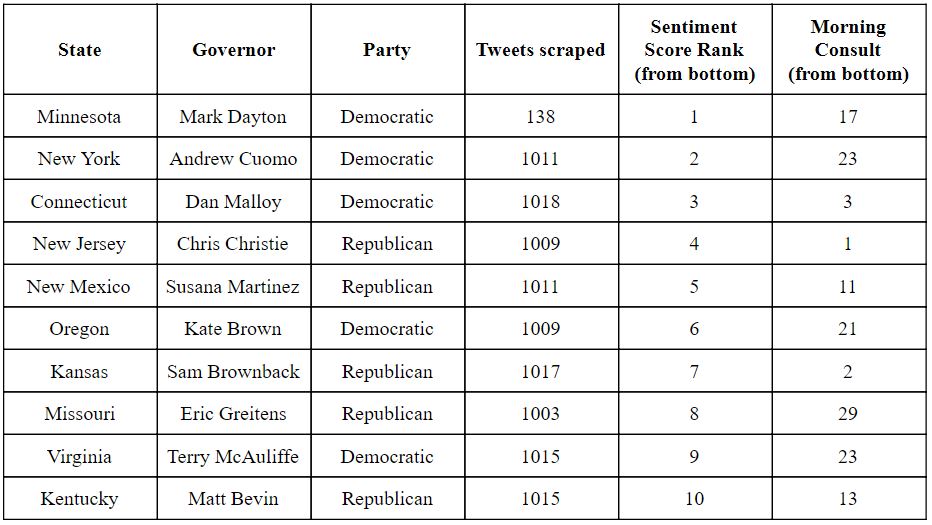 We can draw  the following conclusions: