Typhoon Visualization Through the Years

Nearly 1/3 of all tropical storms occur in the Western Pacific basin. Prior to the electric telegraph, there was virtually no method of forewarning a typhoon in time before landfall. The advent of aircraft reconnaissance and the  introduction of radar  around 1950 helped create early detection systems for typhoons, and with satellites imaging there is a whole bevy of data that can be gleamed right from the early formation of a tropical storm.

Currently, scientists are able to track the path of typhoons and hurricanes, both simply different names for a high intensity tropic storm, but it remains a challenge to track their intensity. A powerful Super typhoon or Category 5 Hurricane with major destructive force can dissipate into a limping tropical storm of Category 2.  Likewise, a tame 45 mph storm might suddenly gather momentum and unleash havoc on landfall. Further areas of interest include predicting typhoon formation and even number of typhoons within a given time period.

Because the potential economic damages, interference with transportation and potential of life, predicting typhoons is a means to prevent such damage, or at the very least brace for them. With the advent of improved computing performance and automated collection of data, much of the improvement of prediction relies on techniques such as statistical modeling and machine learning.

In our exploratory analysis of typhoons, we do a cursory examination of the best track fit data provided by the Japanese Meteorological Society.  The goal is to provide a visualization and a possible blueprint for further in depth analysis.

The Dataset, acquired from here, consists of a header with information such as name, international ID, and number of observations in 6 hour intervals. The observations consists of variables including location in latitude and longitude, Pressure of the center, and Maximum Sustained Wind Speed for observations 35 kt or greater. Moreover, the dataset includes information of typhoon radii and speeds corresponding to the radii.  As of August 30th we have 62,771 observations of  1,712 tropical storms, including typhoons, in the Western Pacific quadrant. Note that prior to 1977 the observations only include ID, location, and Pressure. Lastly, from the data we can calculate time elapsed and approximate the distance traveled by using the Haversine distance between coordinates.

Using ggplot2, we examine the typhoon dataset on three levels: typhoon within a given year, typhoons over the years, and typhoons over seasons.

First, we plot the behavior of typhoons from Jan to Aug 2016: 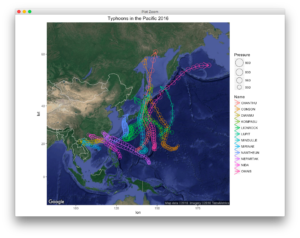 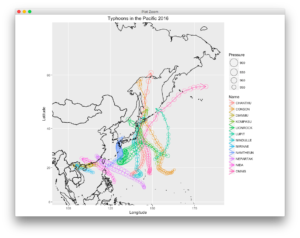 Though nice to visualize the paths taken, and the pressure at each data point, it isn't very clear to what's going on.

We plot the corresponding Maximum Sustained Wind Speed and Pressure of the 12 tropical storms (click to enlarge): 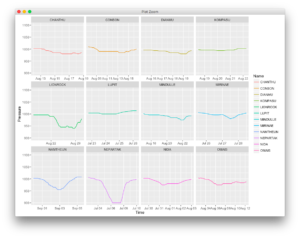 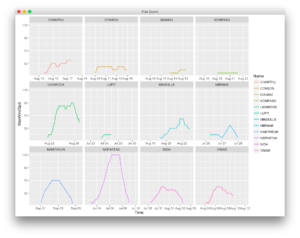 Note the pressure drop off and corresponding maximum sustained windspeed increase for the typhoon Nepartak. Wind flows from high to low pressure, so intuitively pressure and wind speed should have an inverse relationship.

Here we work with four variables and plot them against each other: Pressure of the center, Maximum Sustained Wind Speed, Time Elapsed and Distance Traveled (click to enlarge). 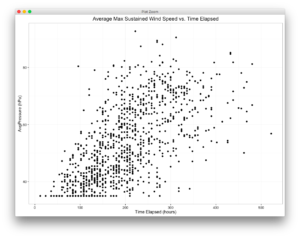 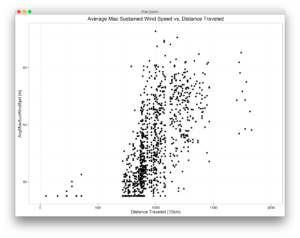 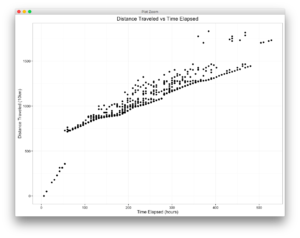 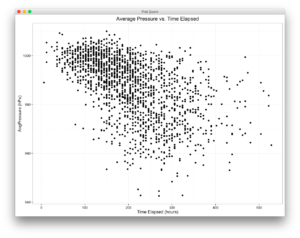 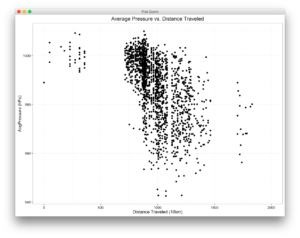 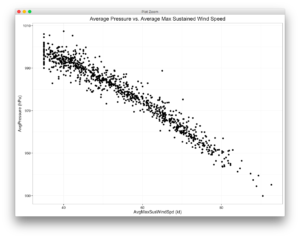 in Pressure vs Time Elapsed and MSWS vs Time Elapsed, the scatterplot doesn't reveal much, though again we can see they both have somewhat an inverse relationship. For Pressure vs Distance Traveled and MSWS vs Distance Traveled, though we see that a majority of observations fall between 7500 - 15000 km, again, the plot doesn't reveal much. However, note the strange vertical gap around 11500 km. This indicates a boundary of some sort, and whether it's a result of the data collection or an actual trend could warrant further investigation.

The last two the plots reveal linear correlation: Average Pressure and Wind Speed are negatively correlated as expected, (I'd imagine with regression the best fit line will have a slope very close to one),  and Time Elapsed and Distance Traveled are positively correlated. However, interestingly enough, there seems to be a steeper slope for observations within 0 -50 hours, though the data points are relatively few. The jump is again due to the distribution of distance traveled. In fact, let's plot the distribution: 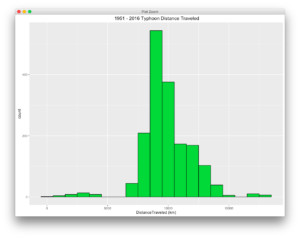 Visually, we can see the mean and median are around 9000 and 10000 km, respectively. Of course, a count of these along with standard deviation could be easily computed, but we won't be going further than the eyeball test for the time being.

And lastly, for typhoons over the years, 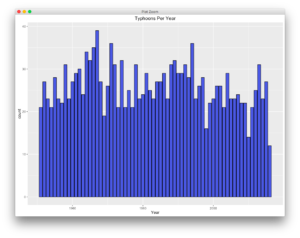 There's seem to be a cyclical pattern going on. Perhaps for further time series analysis? 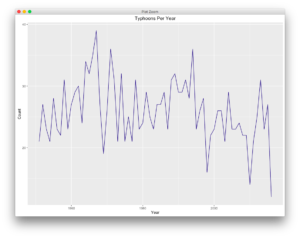 Now do typhoons depend on seasons? Here we do simple split of "seasons" as a time period of 3 calendar months: 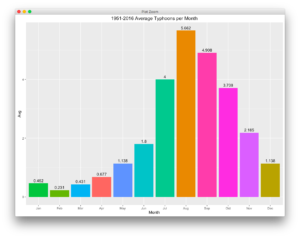 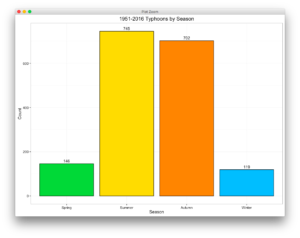 From here it's clear that the summer and autumn seasons have a large spike in the number of typhoons.

Let's see if we can visualize the number of typhoons in a different way, by plotting start and end points: 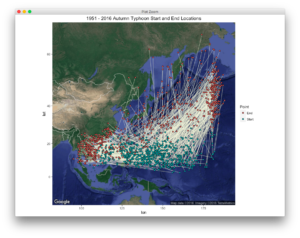 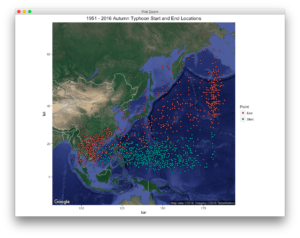 Here it's clear that typhoons form along a latitude approximately between 0 up to  25 degrees latitude, not only in Autumn but in other seasons ( click to enlarge): 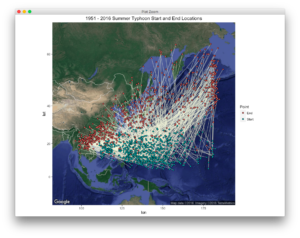 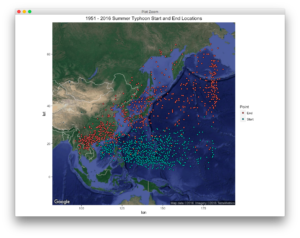 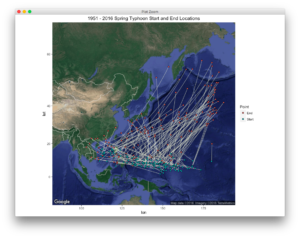 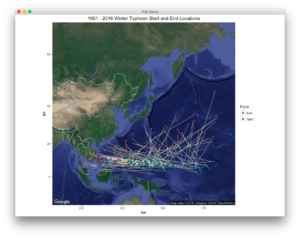 And a reduction of number of typhoons also follows a reduction of range for Spring and Winter,  with a majority around 0 -10 degrees latitude, which means closer to the equator. Since the equator has warmer temperatures, perhaps this is another direction to follow.

Also, from above we can see two distinct clusters of end points, one westward, one northward, along with end points in between those two ( click to enlarge): 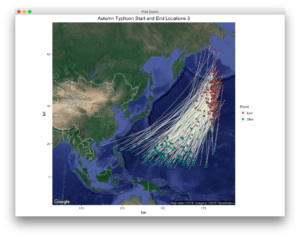 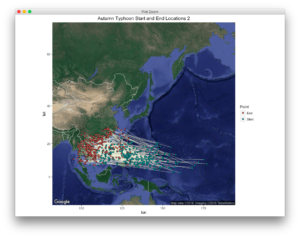 So it seems that after formation, typhoons tend to travel either westward or northward, and perhaps a third direction in between. Perhaps wind direction in the atmosphere is at play here?

We touched upon discovering an inverse linear relationship between wind speed and pressure, and also between distance and time elapsed, though it wasn't very clear what the relationship of the other variables are. Since weather is typically a complicated phenomenon, machine learning such as regression would be necessary to further explore features and to make better predictions. Perhaps we can even incorporate the other features in the dataset.

We noticed a significant increase in typhoons in Summer and Autumn along with a cyclical pattern of typhoon count over years. Using visualization, we noticed patterns in typhoon starting points and ending points. As mentioned, perhaps we can continue exploring with temperature gradient and wind direction data for a clearer picture.