Terrorism by the Numbers

Contributed by Ismael Jaime Cruz. He  is currently in the NYC Data Science Academy 12 week full time Data Science Bootcamp program taking place between April 11th to July 1st, 2016. This post is based on his first class project - R visualization (due on the 2nd week of the program).

Over the past year, terrorist incidents have been growing by the numbers with attacks hitting different regions including Europe, Africa, and the Middle East. In November 2015, Paris was hit by the Islamic State and produced a death toll of at least 130, stirring sympathy and outrage from the global community. In other areas such as Nigeria, casualties from terrorist attacks were estimated to have been in the thousands. 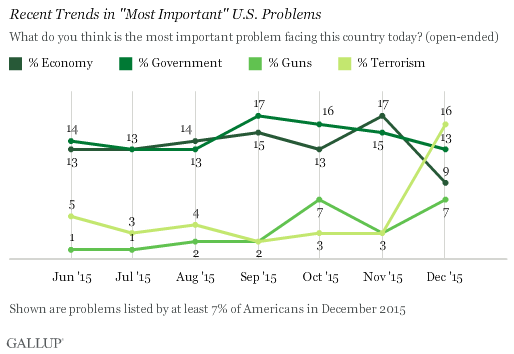 In light of these terrible incidents, I wanted to see how terrorism has been changing over the years and how it has affected different areas around the world.

I set out to do the analysis through an exploration of the Global Terrorism Database (GTD) provided by the National Consortium for the Study of Terrorism and Responses to Terrorism (START). 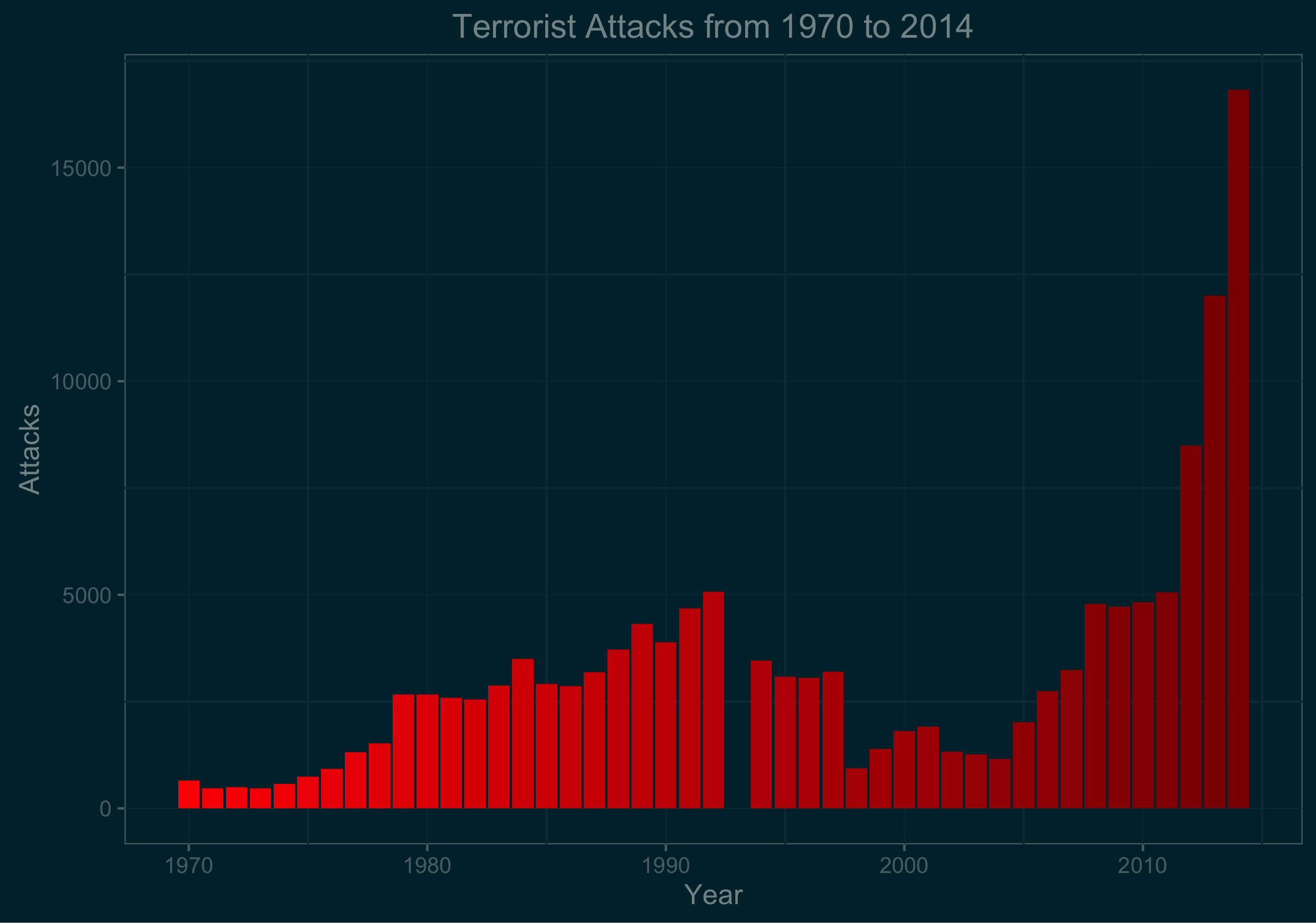 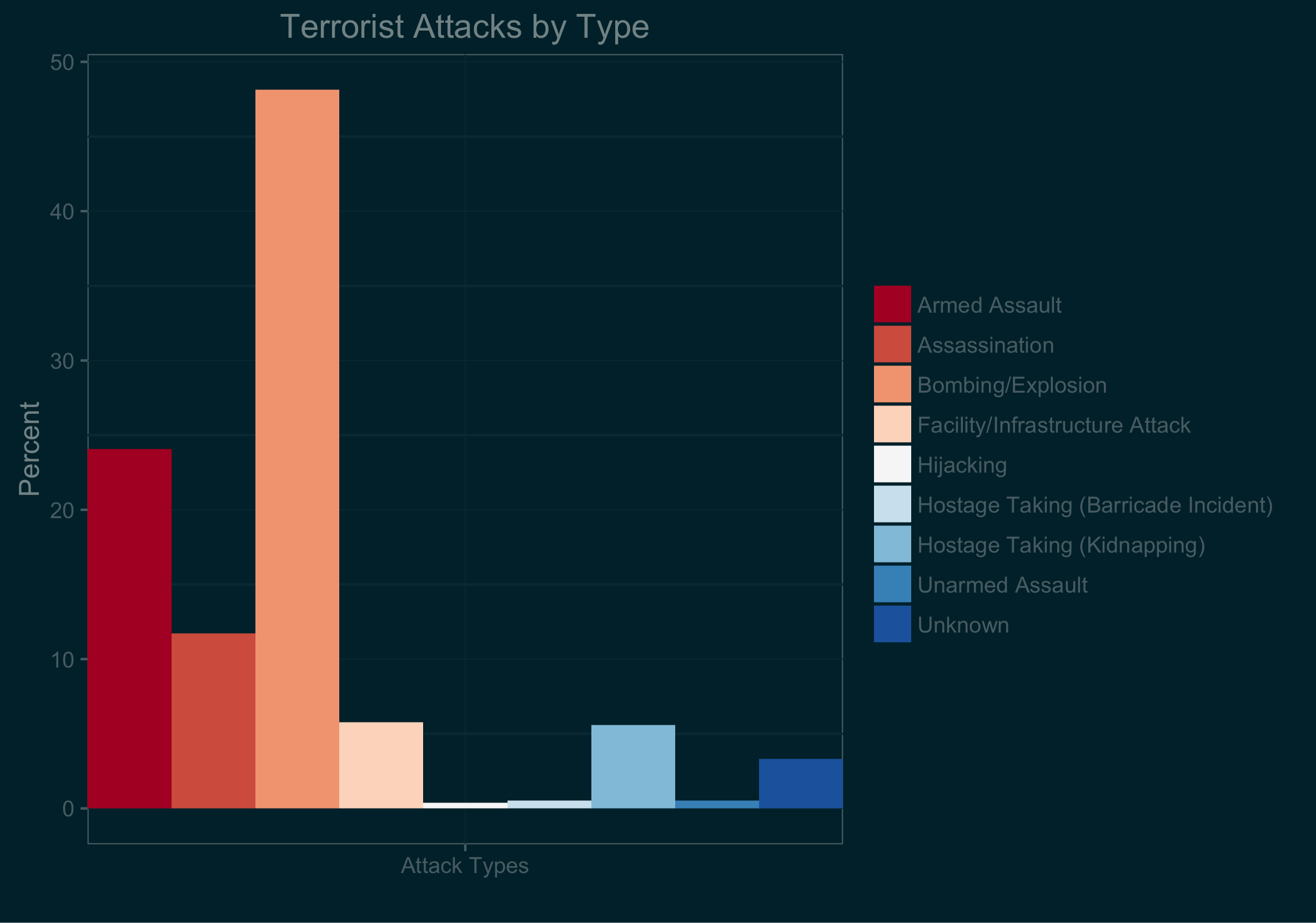 I wanted to see how the top 3 most common attack types changed over time. 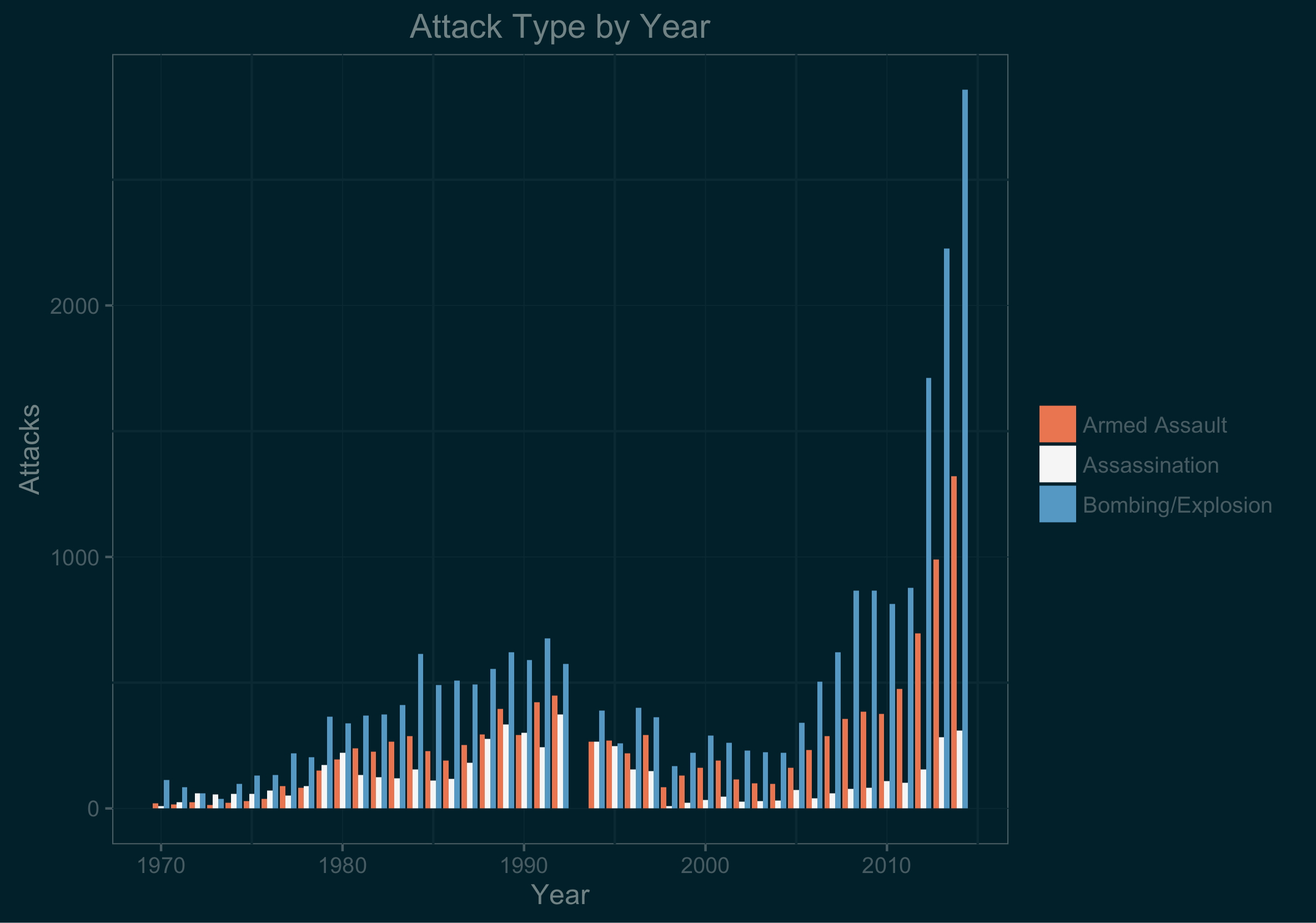 Next, apart from the incidents of terrorism, I thought it was also important to see the gravity of the attacks in terms of casualties. 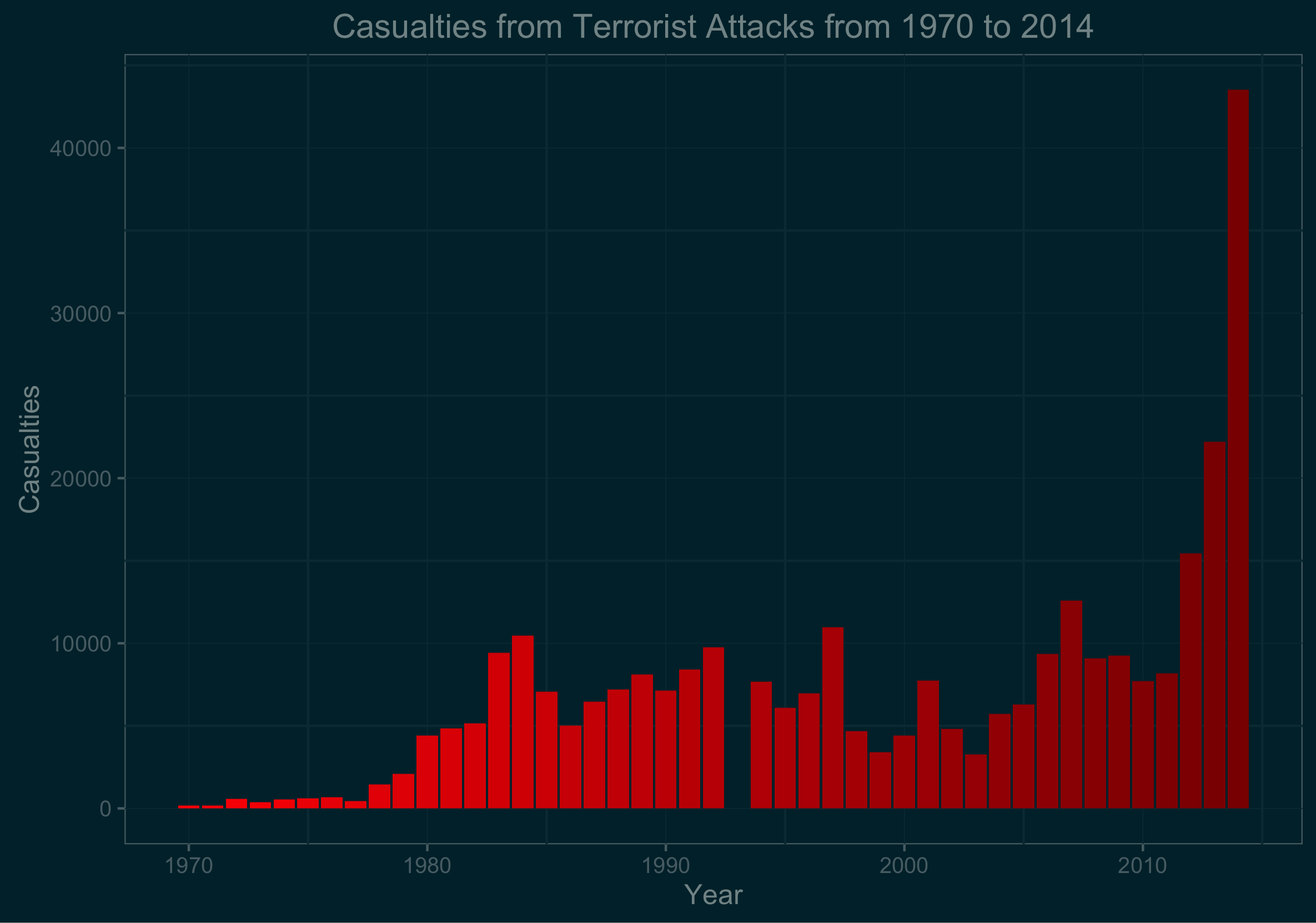 Casualties from Attack Type by Year 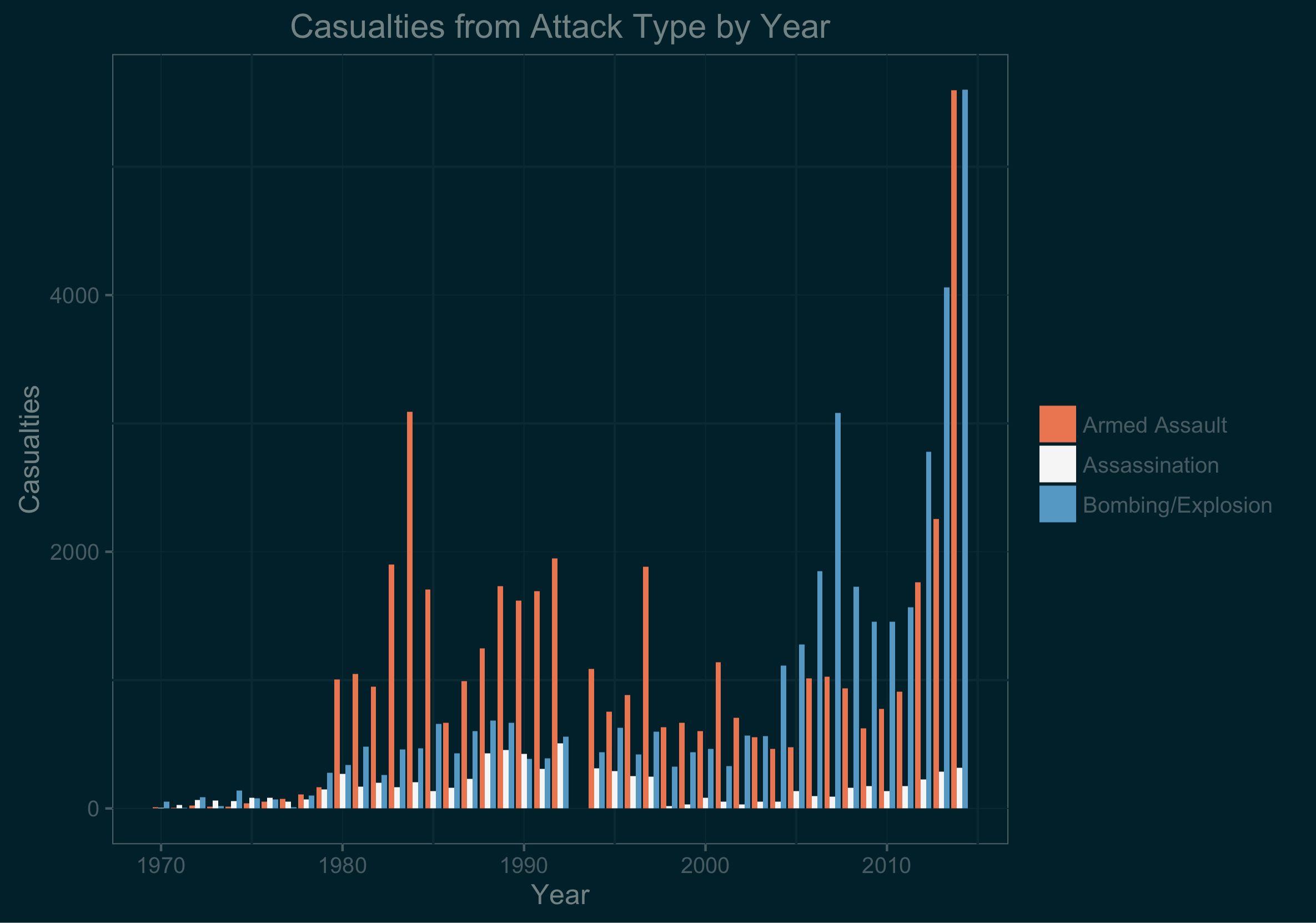 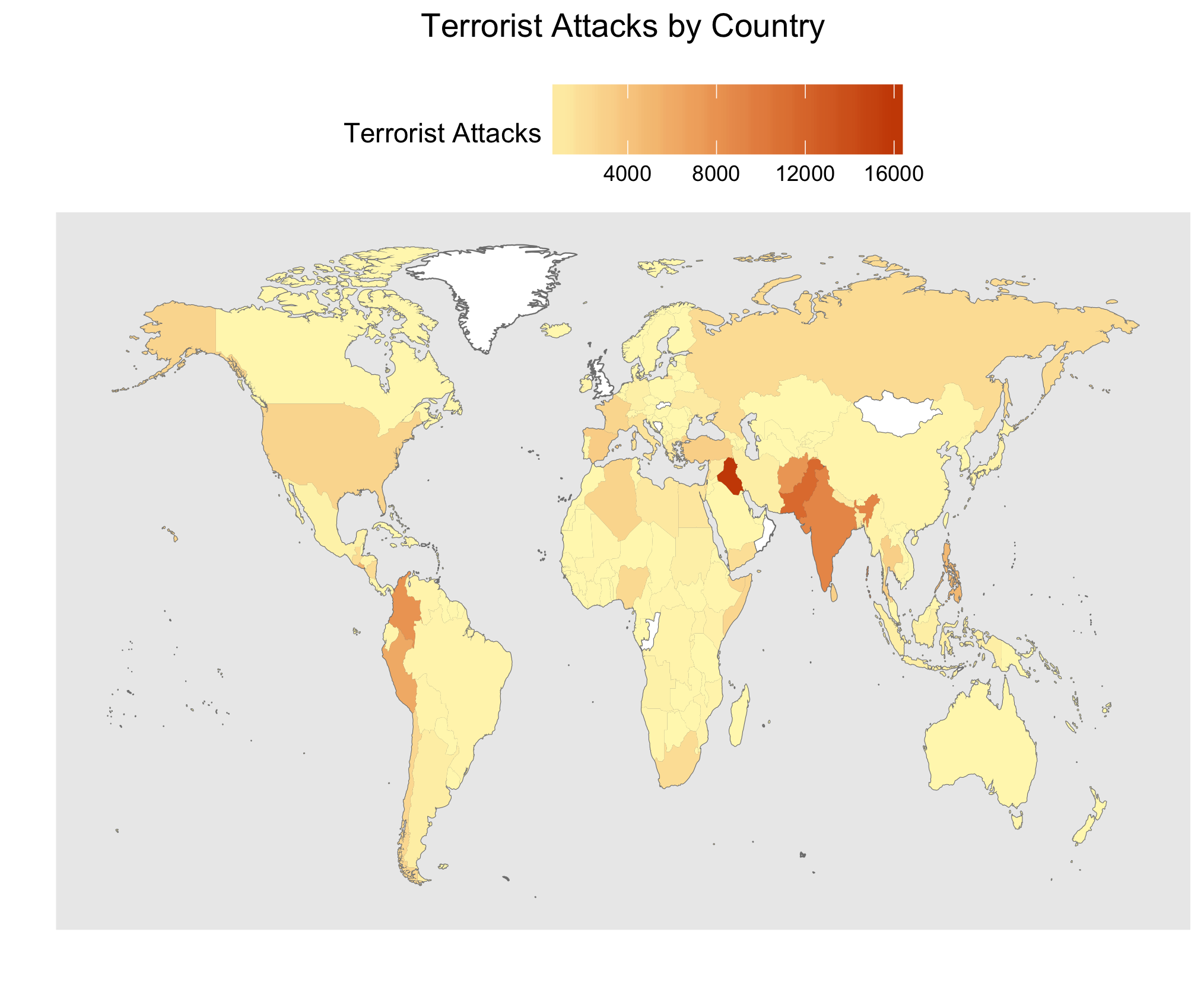 At this point I wanted to compare what terrorism looked like from different areas around the world. I decided to tally attacks in major global cities and compare them to the top cities by frequency of attacks. I defined major global cities to be the list of 16 Elite Global Cities as described by the management consulting firm A.T. Kearney. According to the firm, such cities are hubs of commerce, culture, and politics and are likely to exert their global influence well into the future. The other group consisted of the top 16 cities with the most attacks which include cities from South Asia, South America, and the Middle East. 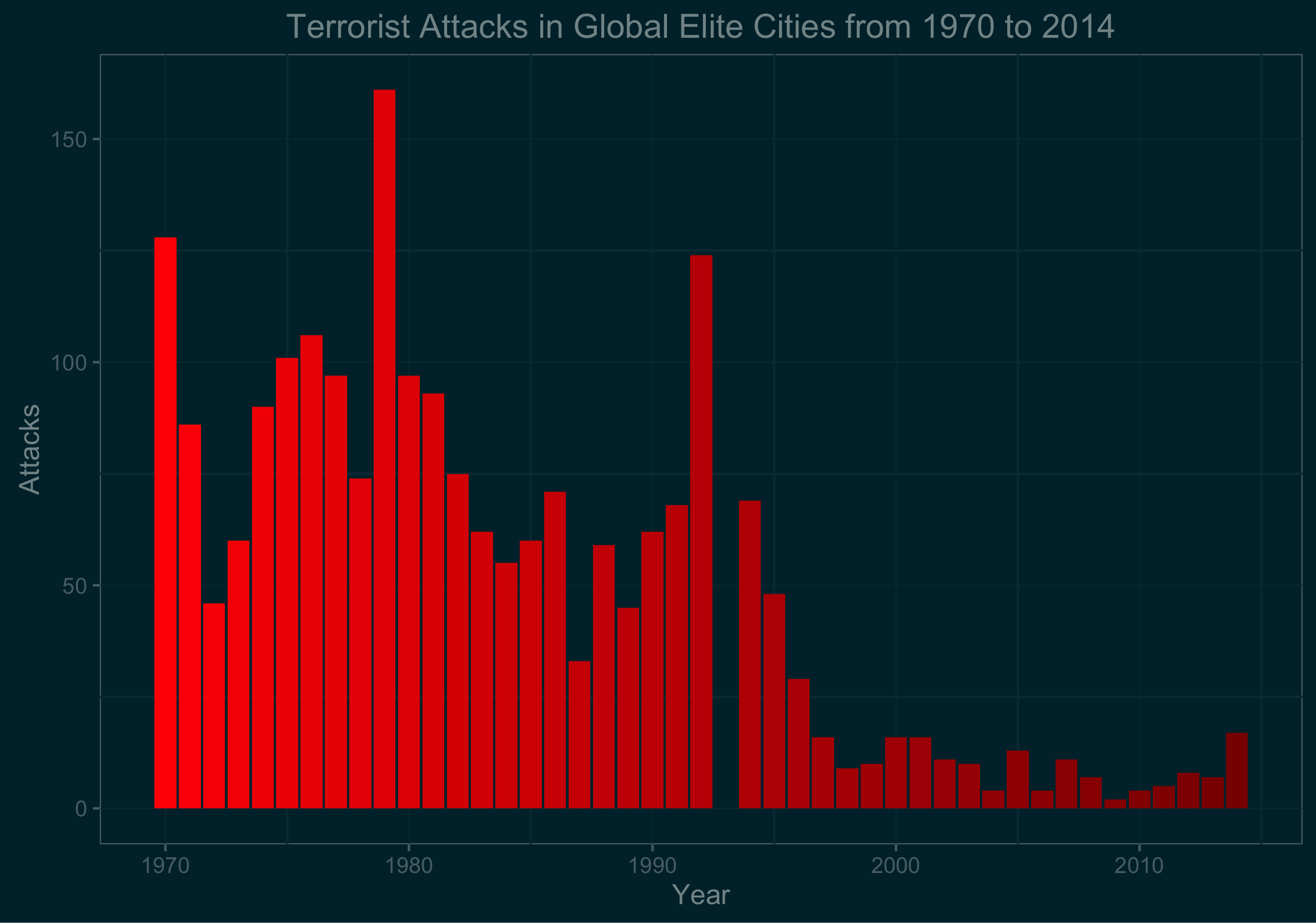 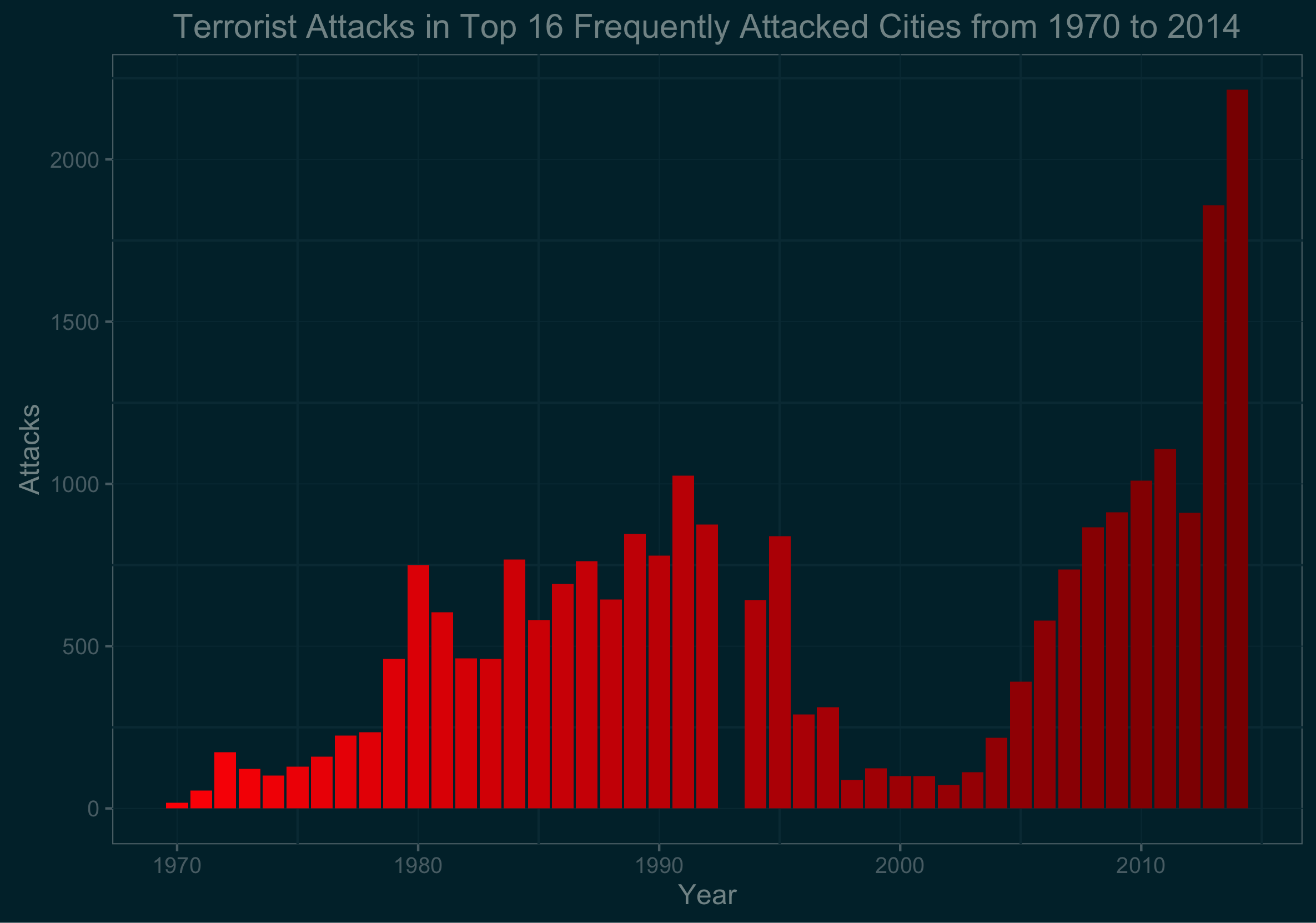 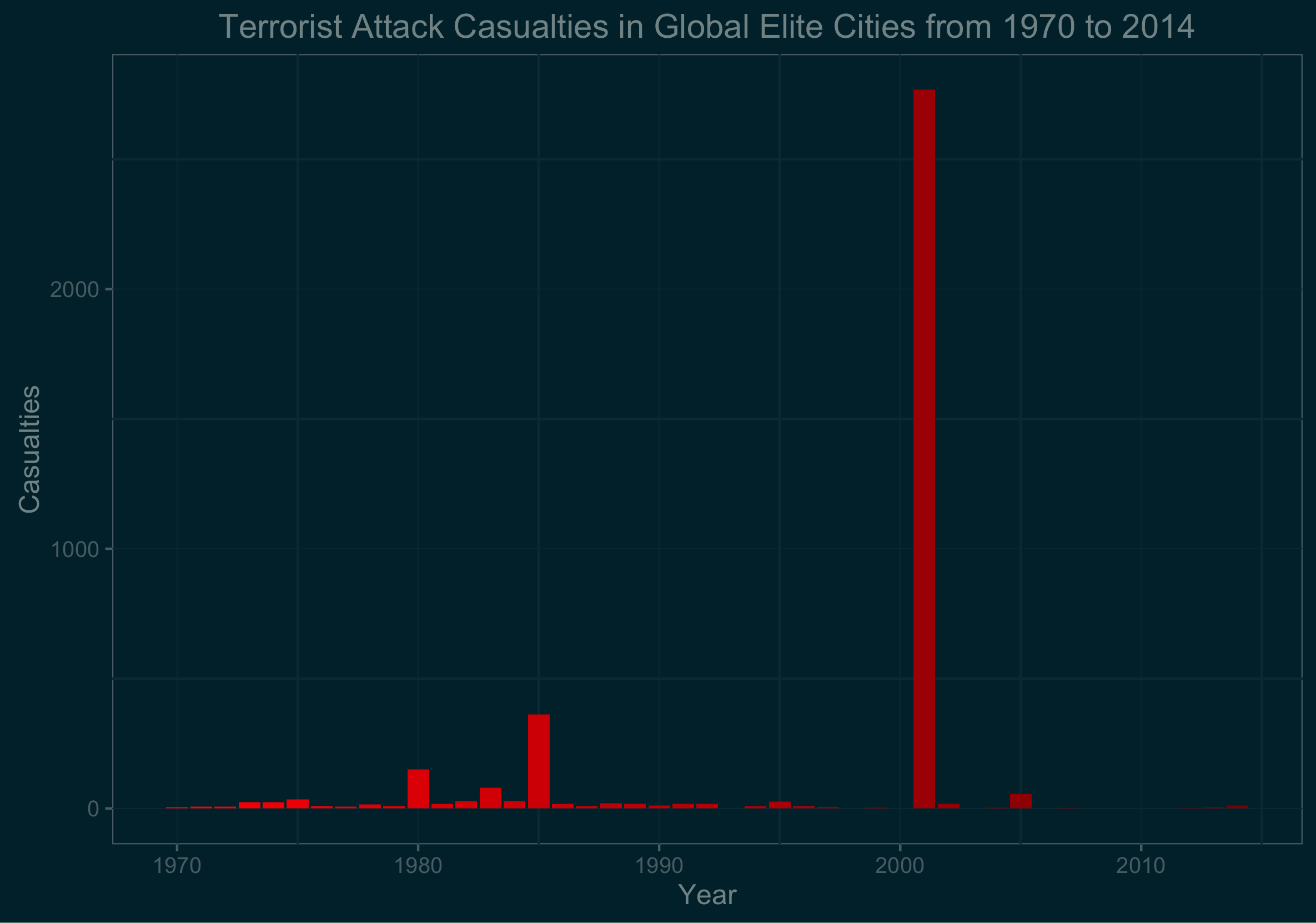 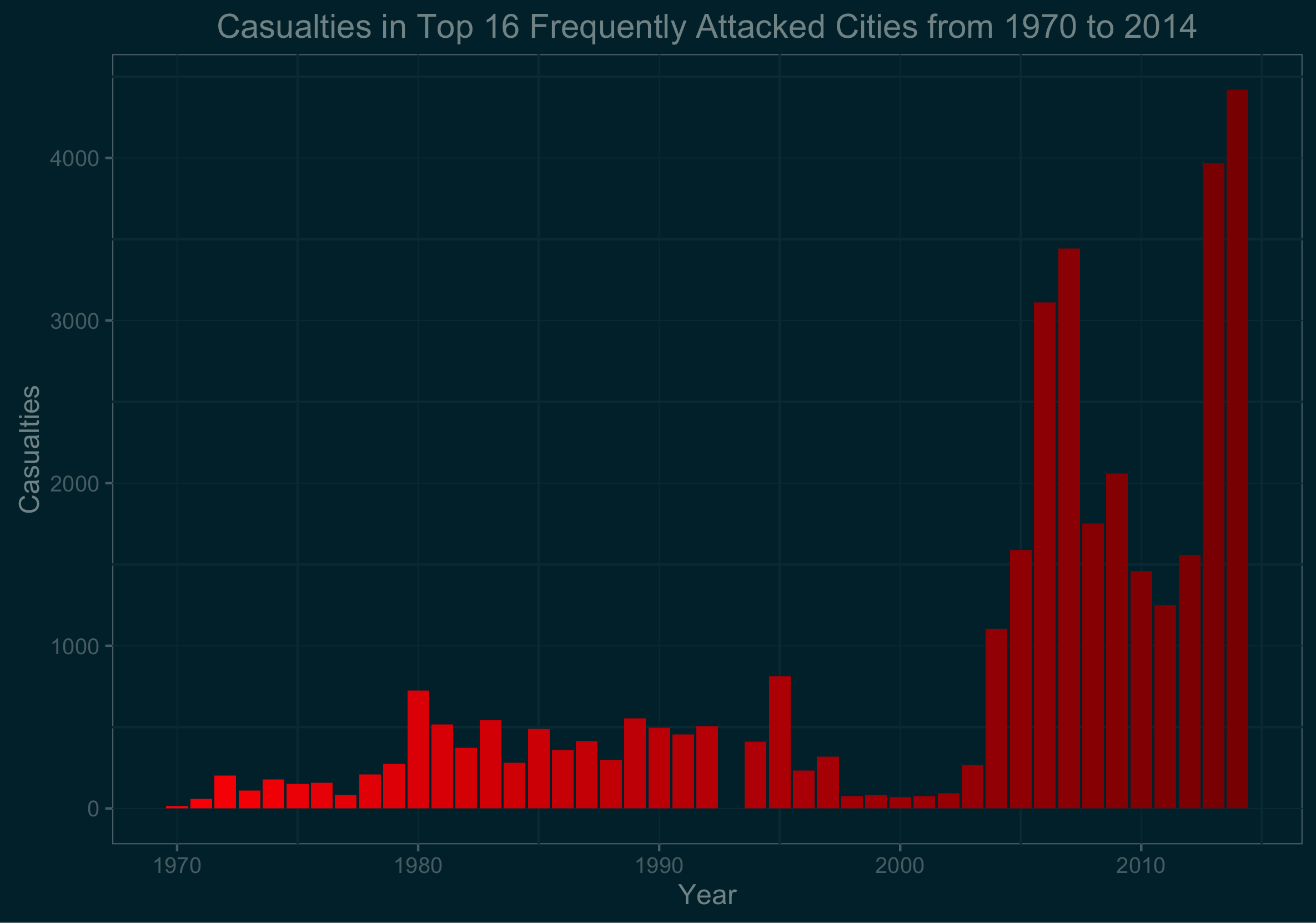 Terrorism is an important issue that different regions across the world are facing. It is alarming that the number of terrorist attacks have been surging in recent years primarily led by bombings. Although it may be a good indication that the casualties from armed assault have more or less decreased over the years, it is frightening to see that bombings have taken the lead as the primary cause of casualties in the last decade. In addition, despite terrorism occurring in different parts of the globe, the difference in terms of attacks and casualties across major global cities and regions such as the Middle East and South Asia are too significant to go unnoticed.

Some questions I would like to explore for future analysis:

Code for the graphs above: