Space Oddities – Where do Satellites Come From?

Contributed by Thomas Kolasa. He is currently in the NYC Data Science Academy 12 week full time Data Science Bootcamp program taking place between January 11th to April 1st, 2016. This post is based on his first class project - R visualization (due on the second week of the program).

For my data visualization project, I looked at artificial satellite data from the Union of Concerned Scientists. It concerns the 1,305 operational satellites orbiting Earth as of the 31st of August, 2015. While there have been fascinating visualizations of space debris done by Google Earth and others, the UCS data contain satellite origin locations and ownership information useful for analyzing the overall industry.

The data is collected from multiple sources. First, the Convention on Registration of Objects Launched into Outer Space requires that countries report satellite information to the United Nations Office of Outer Space Affairs. Even so, some countries neglect to report launches of covert satellites. However, other countries act as watchdogs, reporting when they detect a foreign satellite launch. Amateur astronomers also fulfill this watchdog role.

Next I examined the launching state of these satellites. While 25% of satellite origin countries are labeled “NR” (Not Reported), many of these are new satellites that are not yet labeled. These values are therefore missing at random (MAR) with respect to time and do not severely undermine the analysis. Using dplyr and ggplot2, I grouped the most active satellite origin countries and plot them on the world map: 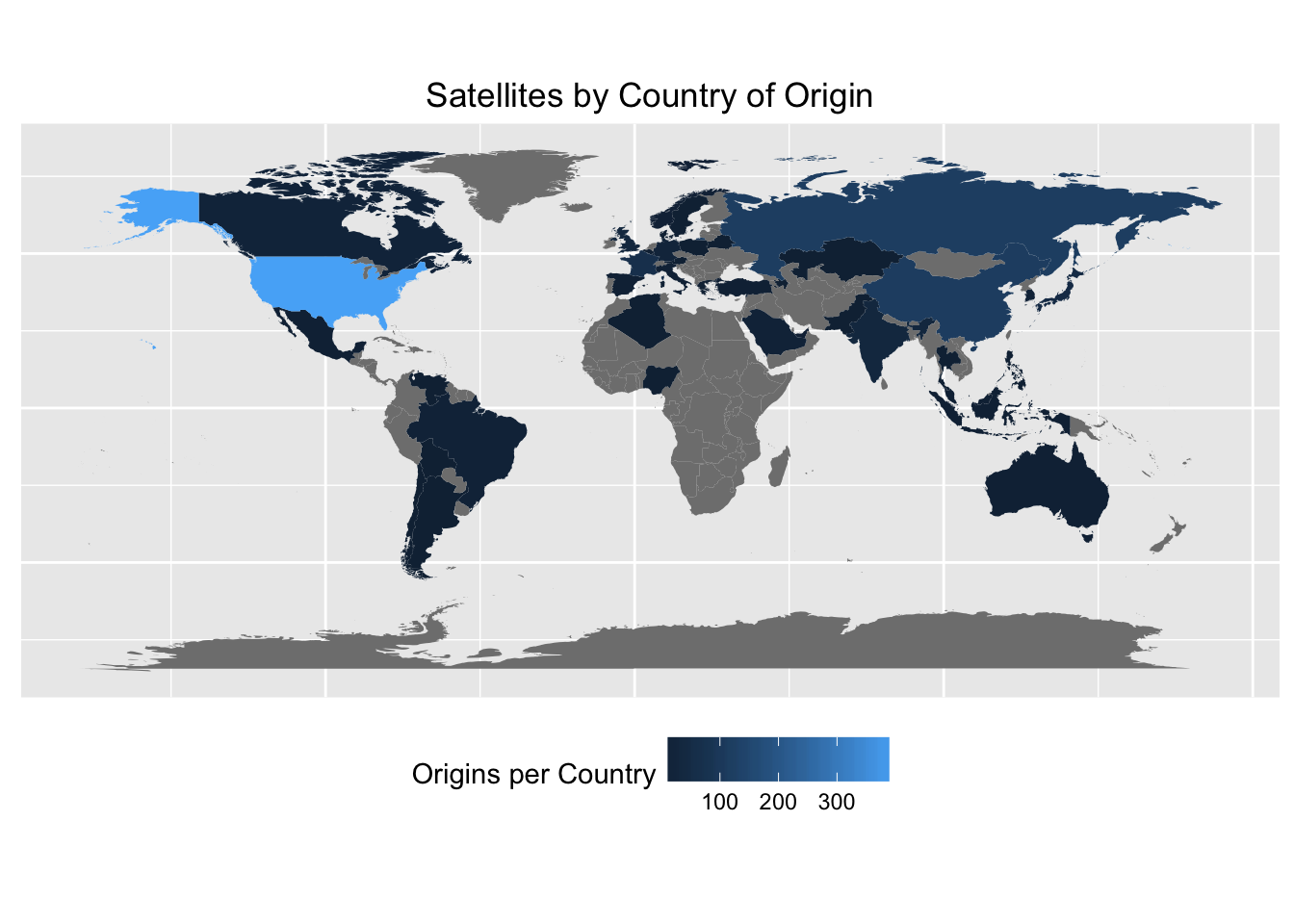 The launch site with the most satellites currently in orbit is the Baikonur Cosmodrome in Kazakhstan, one of the main launch sites of the Russian space program. The second busiest launch site is in French Guiana where the European Space Agency performs most of its launches.

And here are launch locations on the world map: 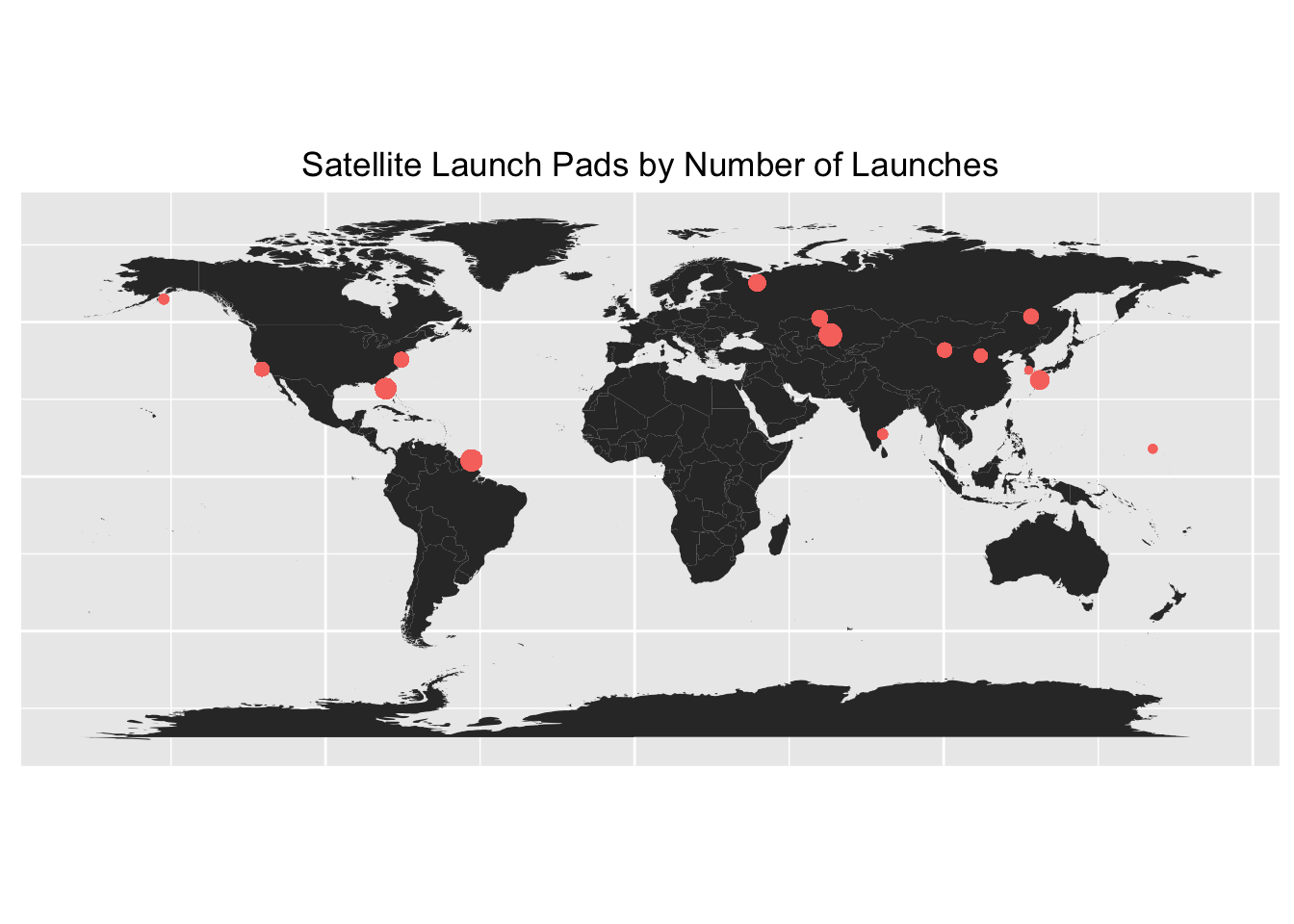 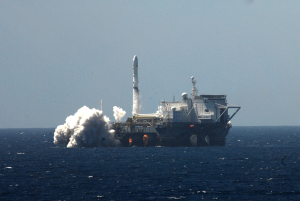 Four other sea launches took place. While the dataset lacked more details, submarines are also capable of launching small satellites into orbit. Since a submarine can launch from nearly anywhere in the open ocean, this is currently the most likely way that a completely anonymous satellite can enter orbit.

One current satellite was launched from an L-1011 Aircraft, as shown here: 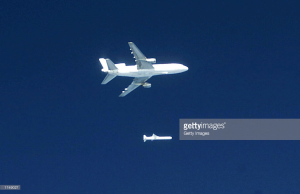 The dataset groups the uses of satellites into civil (academic or amateur), commercial, government (meteorological, scientific, etc.), or military. I next looked at these purposes by the three largest satellite launching countries and others. I also looked at the “Not Reported” country of origin of satellites to identify any trends. 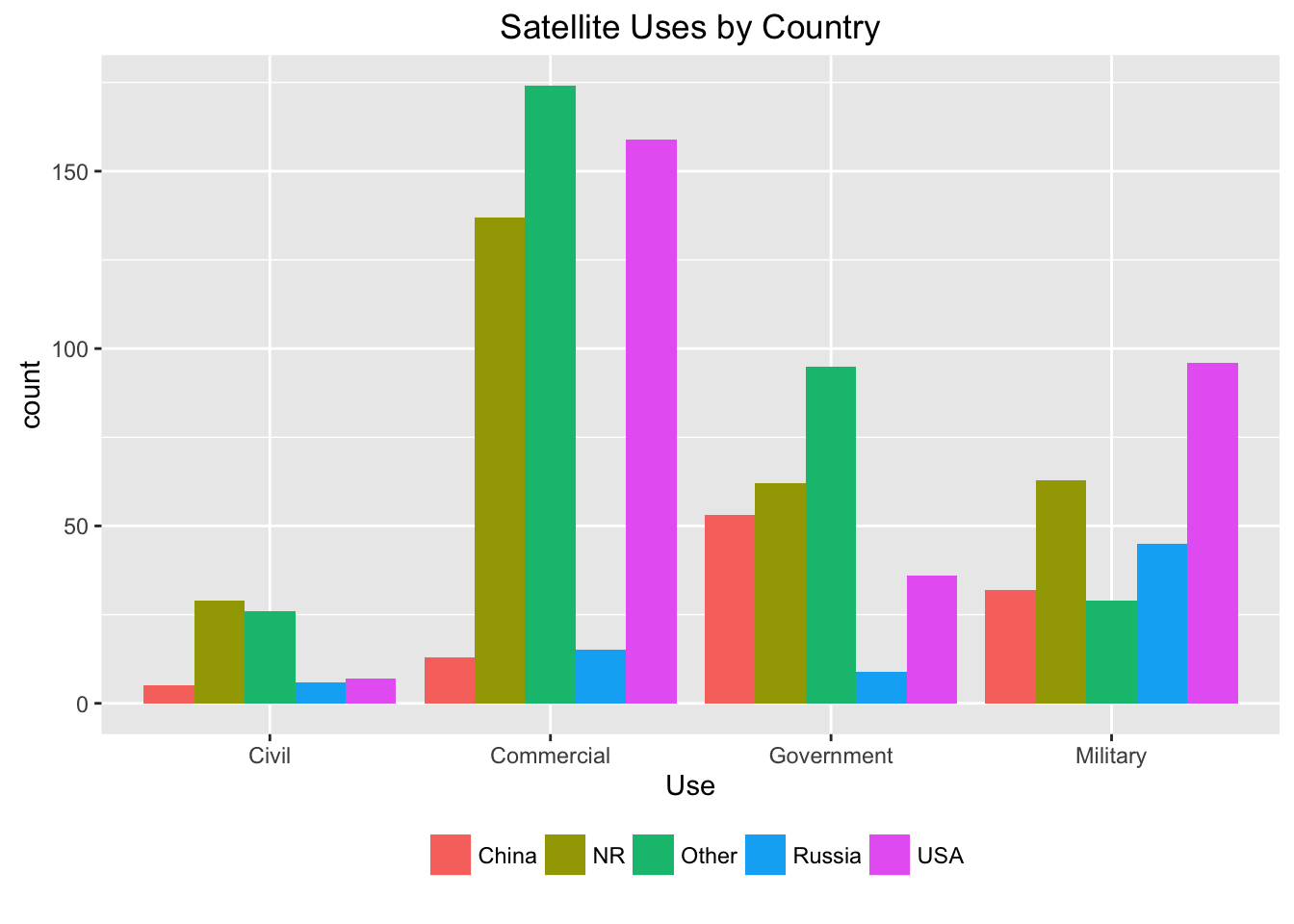 I estimated the distance of a satellite from the Earth to be the mean of its Perigee and Apogee. While excel has conditioned many of us (including me) to simply plot group means on bar charts for comparison, the following plot presents more facets about the data. By presenting a scatter plot with jittering, it visualizes each orbit type’s mean distance from Earth and its distance variance. 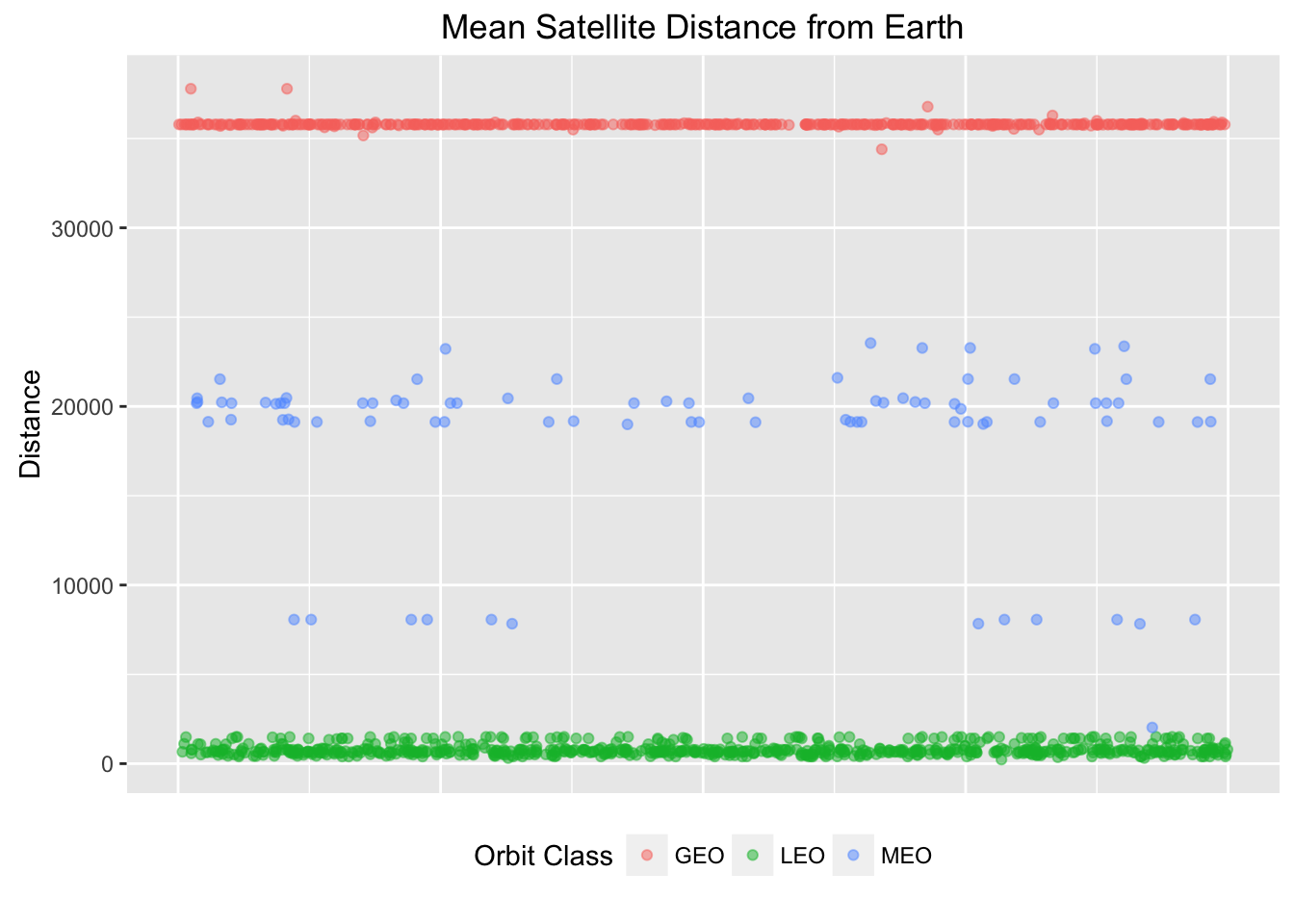 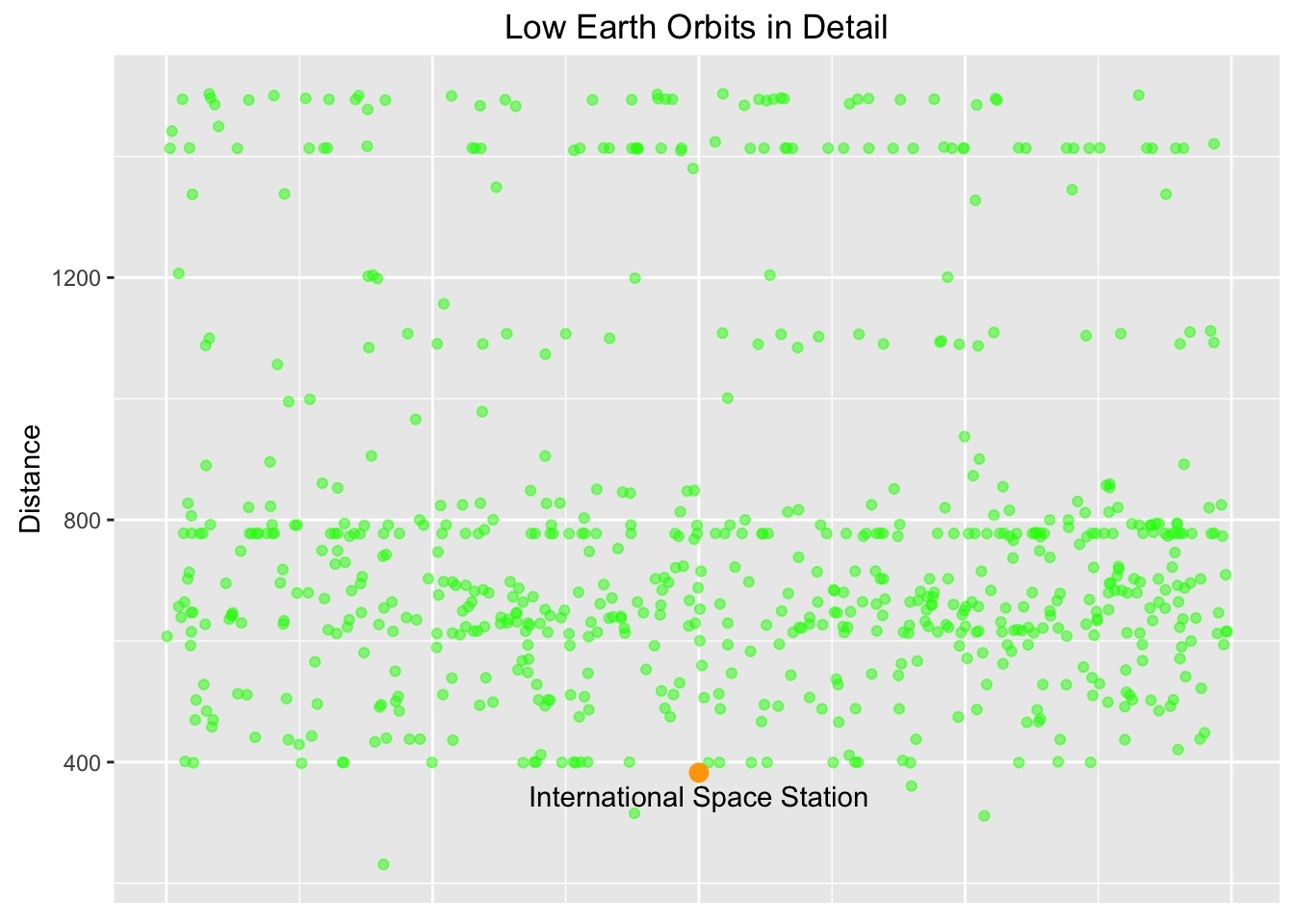 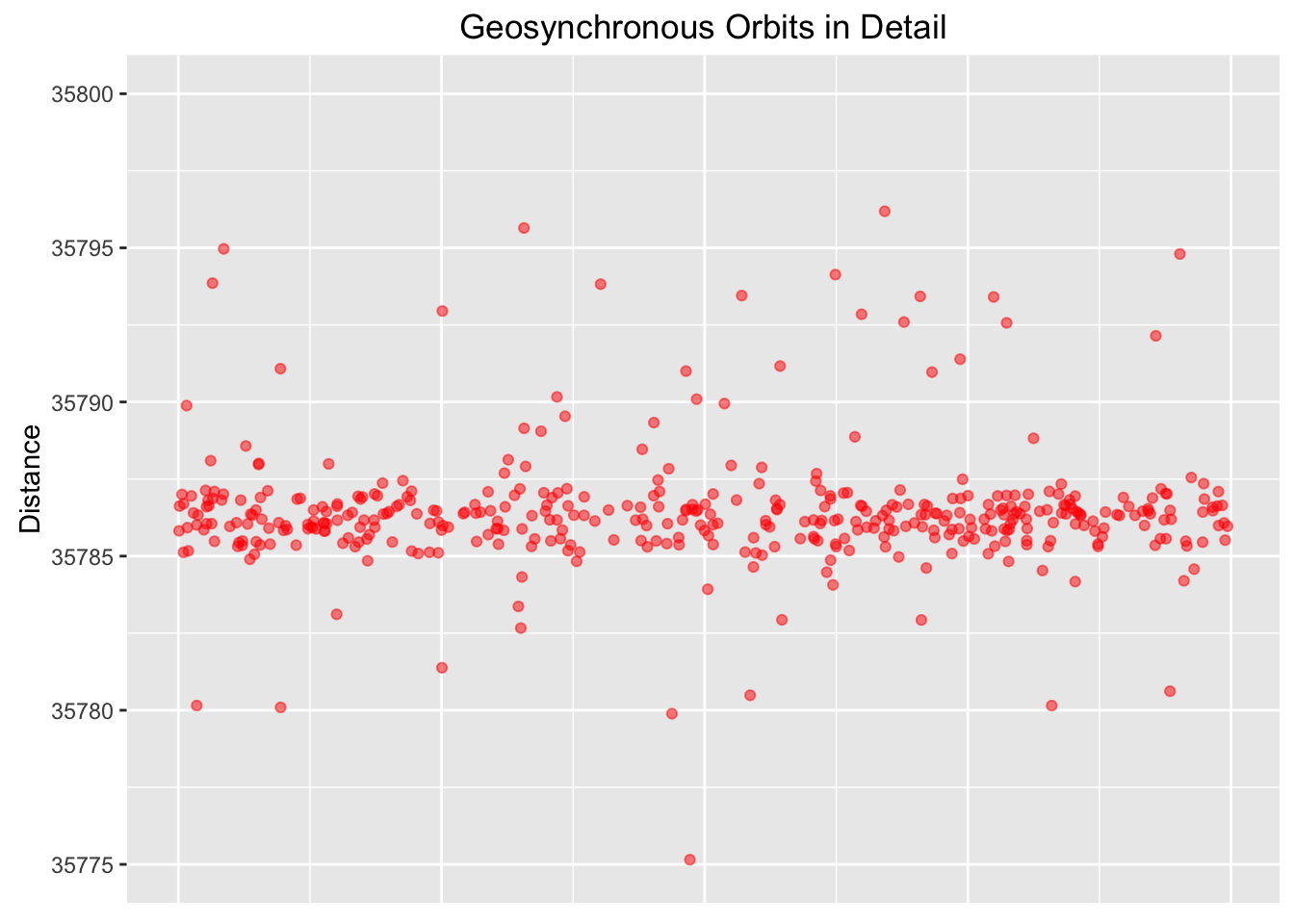 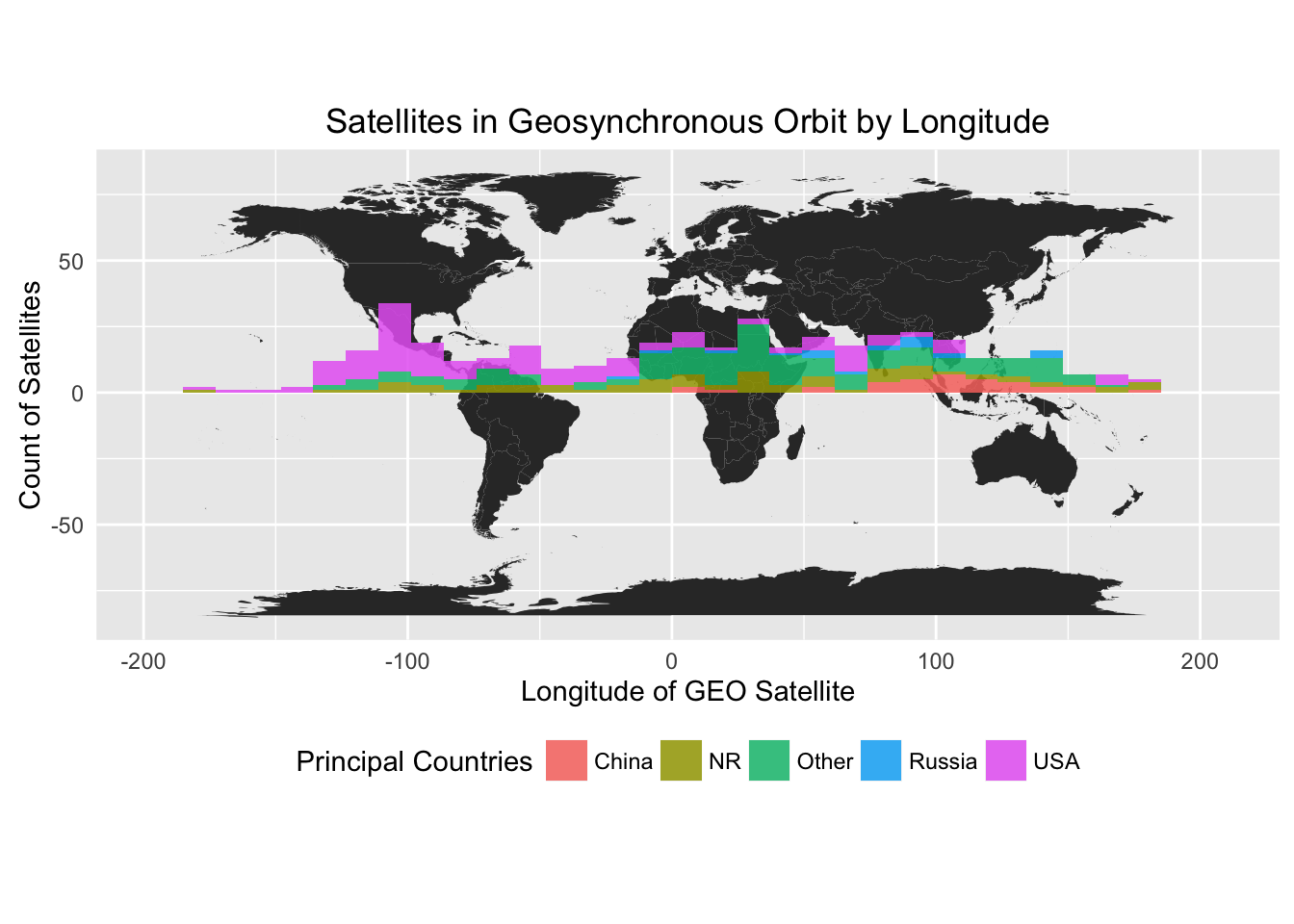 My next exploration of the data tried out the JavaScript library D3.js. The following visualization once again shows satellite distance from Earth randomly jittered along the x-axis, this time with detailed satellite information on hovering. Selecting specific countries allows the user to investigate specifics about a country’s satellites, including a satellite name, country of origin, overall use, and detailed purpose.

Although I formatted the plot for an R Markdown, WordPress does not support JavaScript. You can see the scatter plot here and the corresponding code below.

Claribel April 3, 2017
One of the factors Tracy Murrell left Santa Fe Care Facility was beccause the problem of brief staffingg was never resolved, she stated.