A Data Comparison Between East Coast and West Coast

The website scraped is https://www.carfax.com/ . Carfax is a commercial web-based service that supplies vehicle history reports to individuals and businesses on used cars and light trucks for the American and Canadian consumers. This project focuses on visualizing the differences between East Coast and West Coast. Information on eight major cities was scraped, which include: Boston, New York City, Washington DC, Miami, Seattle, San Francisco, Los Angles and San Diego. 1000 samples from each of the eight cities are scraped. The scraped information contains body type, color, engine, mileage, model, price, drive type, model year, model name and make of each sample.

Correlation of Price and Mileage 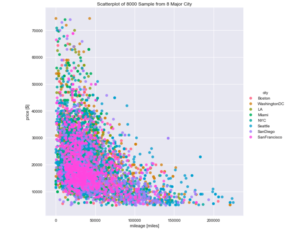 The scatter plot of 8000 samples proves the intuitive idea that cars with lower mileage sell at a higher price. Looking at the clusters, it can be found that Boston and New York like lower mileage cars, which indicate cars are sold at newer condition and people like changing cars. This indicates an important character of the used car market in the East Coast: higher fluidity. Seattle and San Diego have a different pattern where more cars being sold are at a much higher mileage. The boxplots prove that cities on the East Coast composed more lower mileage cars with higher price whereas West Coast used car market composes older cars and the price is lower.

Another interesting point to look at is the body types. Although it is clear that sedan and SUV are the most popular body types, New York, Boston and Washington DC have a much higher portion of SUVs than other cities. This may be the result of cold winter in these cities. On the other hand, cities on the West Coast like San Diego and San Francisco have more sedan than SUVs. The patterns shown on the Engine Size plot proves this point where SUVs have higher number of cylinders. One thing worth noticing on the Engine Size plot is that electric cars market is mostly located on the West Coast.

The popularity of a car can have an influence on the price and fluidity of its market. Toyota has a surprisingly big share of the used car market of most of the cities. Ford is the favorite brand for Washington DC and Seattle. Ford and Japanese brand like Toyota, Honda, Nissan dominate the used car market. New York is a big fan of BMW and Lexus. This may relate to the luxury car rental service of New York.

From the plot of popular models, we can see that West Coast likes hybrid cars like Prius, Prius Plug-in and Camry. Fusion and Focus are the representatives of American cars.

By scraping Carfax for used car information of eight major cities in the United States, comparisons are made to indicate the differences of used car market between East and West Coast. The findings can be used as the reference for dealers, buyers, and sellers. Future work can be focused on enlarging the data base to give more accurate comparisons and converting into a user-friendly interface.

Wei is a current undergraduate student of Petroleum Engineering at Penn State University. Wei's research of applying machine learning to perform numerical simulation gets him fascinated with data science. His dedication and fast learning skills are leading him...
View all posts by Wei Liu >