One of the primary motivations for the project is the capability to uncover "hidden" data and information that can be seen when analyzing the actual month-by-month dynamics of titles coming and leaving Netflix.

While it is not a problem to find a list of titles currently on Netflix, there is, in fact, no centralized database or online service that can show the history of any given title that has ever been to Netflix's online platform.

The best type of information that can be found is when each of the titles currently on Netflix was added. However, there is not a single piece of information on titles that have left the platform. Titles on Netflix live "in the moment." Another complication regarding the option of just looking at the current titles is that, on average, Netflix has 20 'update days' each month, with hundreds of titles coming and leaving every month.

Therefore, the ability to scrape the internet for the history of titles' releases(addition) and deletions can allow us to look at the Netflix content strategy in an entirely different light.

Some of the questions that can only be answered by observing a month-by-month dynamics are: What is the 'busiest' month for Netflix in terms of titles coming and leaving? On what day of the month does Netflix usually add the majority of its titles? How has the number of titles released/deleted each changed over the last 5 years? Are more titles being added or removed from the platform? Are there more movies or TV shows leaving Netflix?

Data was "webscraped" using Python open-source web-crawling framework called Scrapy. The website that was used to scrape the relevant data is whats-on-netflix.com, which is one of the most consistent and detailed sources of information for the Netflix titles' releases and deletions for each month.

A list of the titles to be released or deleted is hosted on the separate page, and that required generating links and scraping the data from 120 unique webpages.

Key findings can be divided into four major groups - “Releases”, “Deletions”, “Releases vs. Deletions” and “Lifecycle.”

First of all, few general findings allow us to see the general picture of what has happened to Netflix titles over the last 5 years.

Overall, there were 5254 instances of title release on Netflix over the 60 months of 2015-2019. Some of the releases included additional seasons of Netflix original already present on the platform. Over the same period, Netflix has seen a higher number of titles being deleted from the platform - 5763. On average, there were 88 releases and 96 deletions per month.

Overall, the number of titles released has been steadily rising over the last 5 years, demonstrating the Compound Annual Growth Rate of 16.3%. With just 746 titles being added in 2015, and 1368 titles being released in 2019. 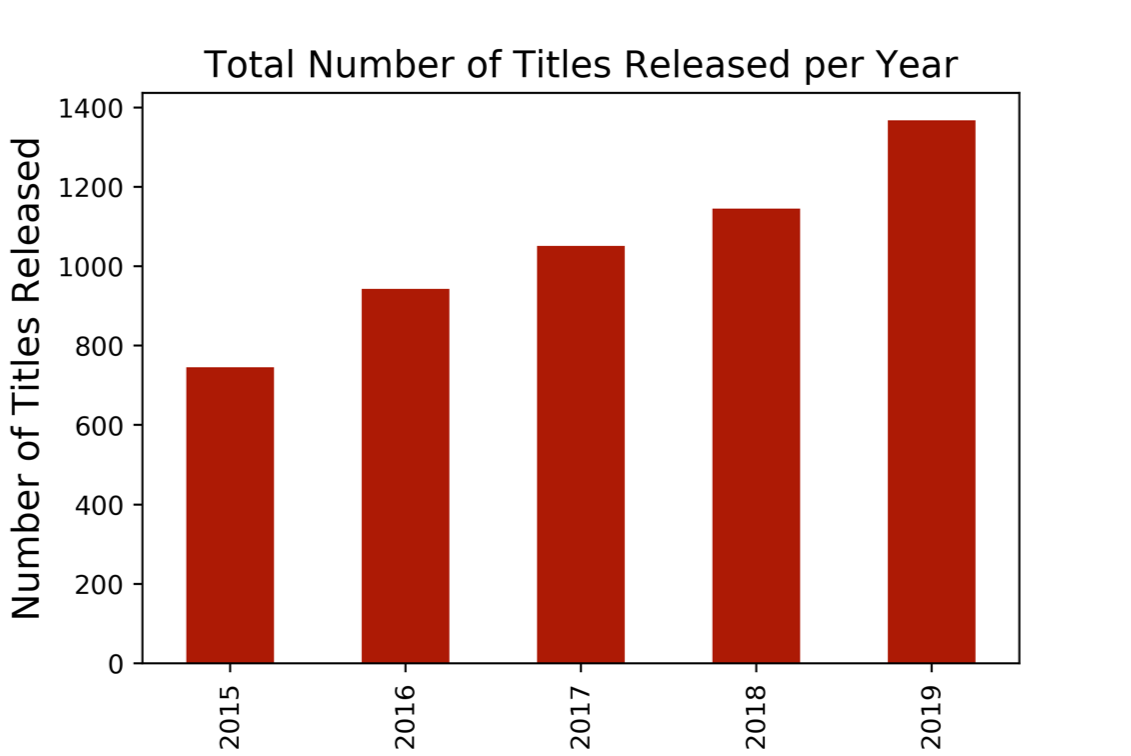 Looking and the dynamics more closely, with a monthly breakdown, we again can observe a more or less consistent dynamics of titles releases, with two significant spikes in May and October/November 2019. 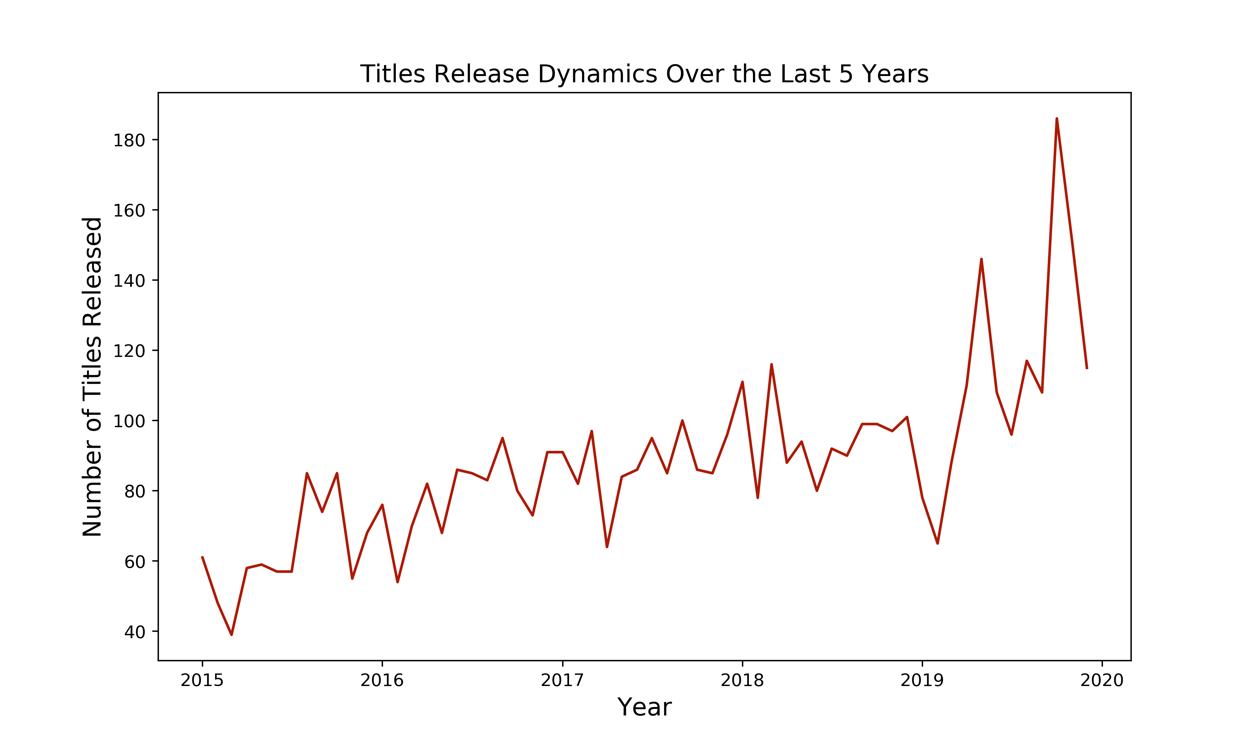 Looking at the title releases, broken by the content type (Movie or TV Show), we can observe a noticeable difference in dynamics over the years. The number of movies added has been growing from year to year, in general, repeating the dynamics of the overall titles additions. However, the number of TV Shows added has not only been visibly less, but it also has had a decline in the number of releases in 2018, while returning to growth in 2019. 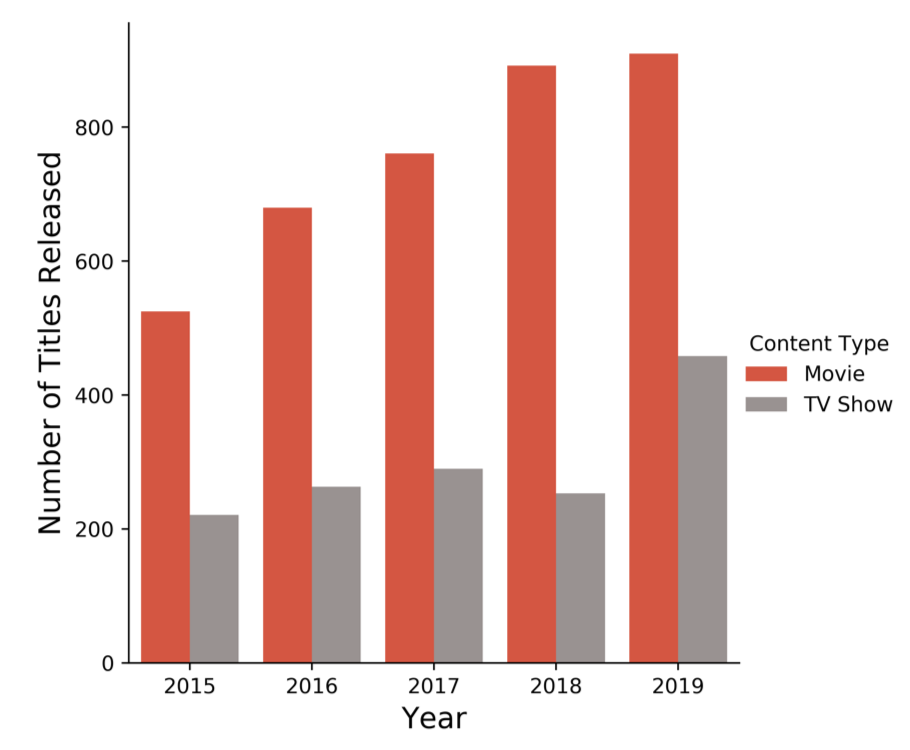 Releases by the Day of the Month

Another crucial question about titles released is what is the day on which most of the new titles are available to stream. It turns out, by far, the most popular day for titles to appear on Netflix is the 1st of the month. This hardly comes as a surprise, since it makes total sense for the company financially, strategically and legally, to add new things on the first of the month.  On average, 35% of all the titles are being released on the 1st of the month. 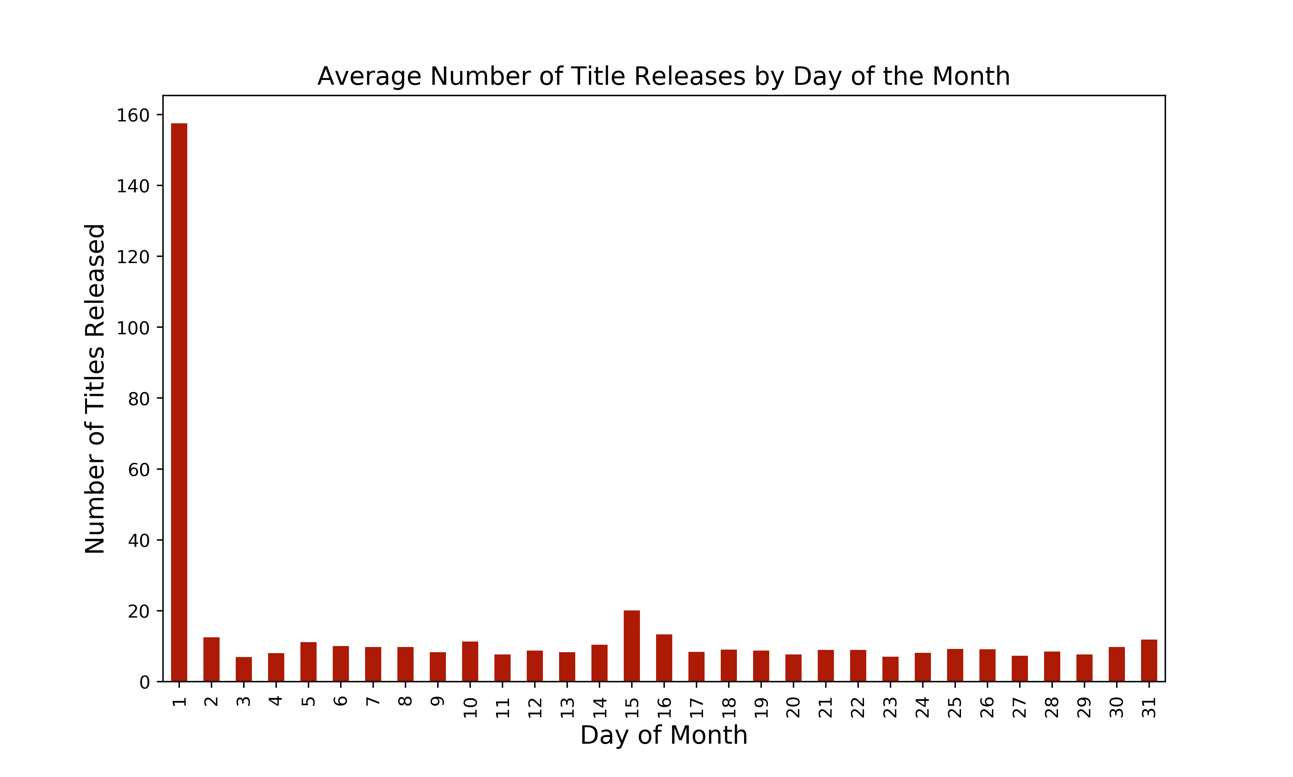 Since the 1st day of the month seems to dominate the monthly cycle, it is also worth looking at other days separately.

It turns out, the second most popular day for title releases is the 15th of the month. Most of the titles seem to come at the specific ‘midpoints’ of each month. This can point to a very concrete strategy that Netflix might be employing regarding titles ‘arrival’. 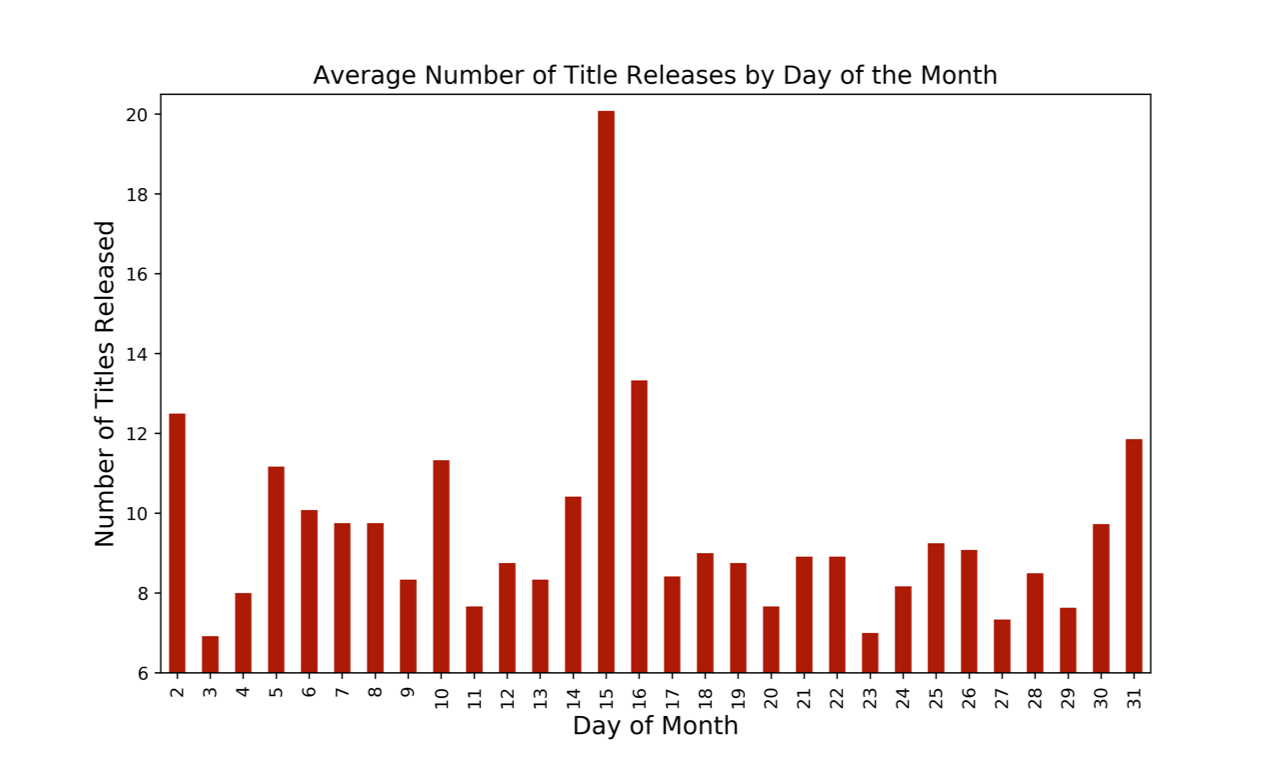 Finally, it's worth examining which months are the 'most tasty' for subscribers, in terms of the number of new titles coming to the platform. The month, which sees most of the titles arriving - is October, followed by September, December, and November. We can clearly observe another strategic pattern of most of the titles coming in the Fall and Holiday season. 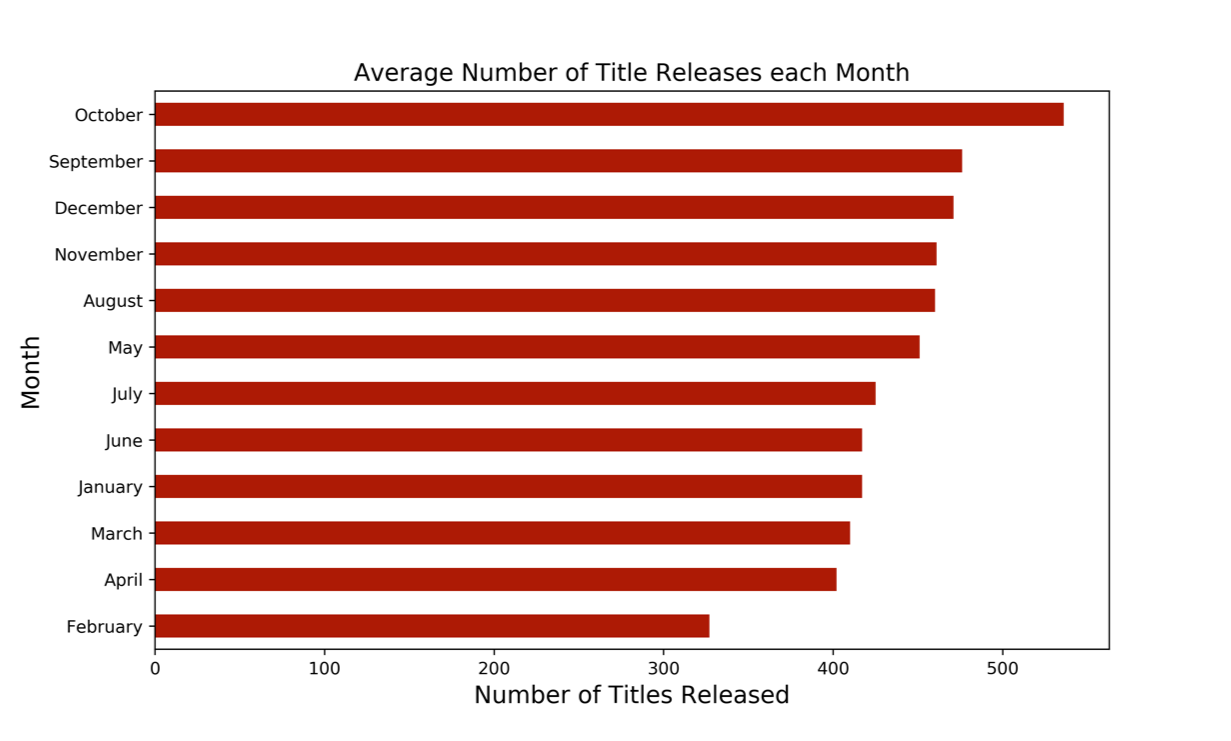 Now it is time to look at the dynamics of titles being deleted from Netflix.

Unlike with titles being released, the yearly dynamics for the titles being deleted is not a consistent one. We can observe an ‘up-and-down’ situation each year over the last 5. 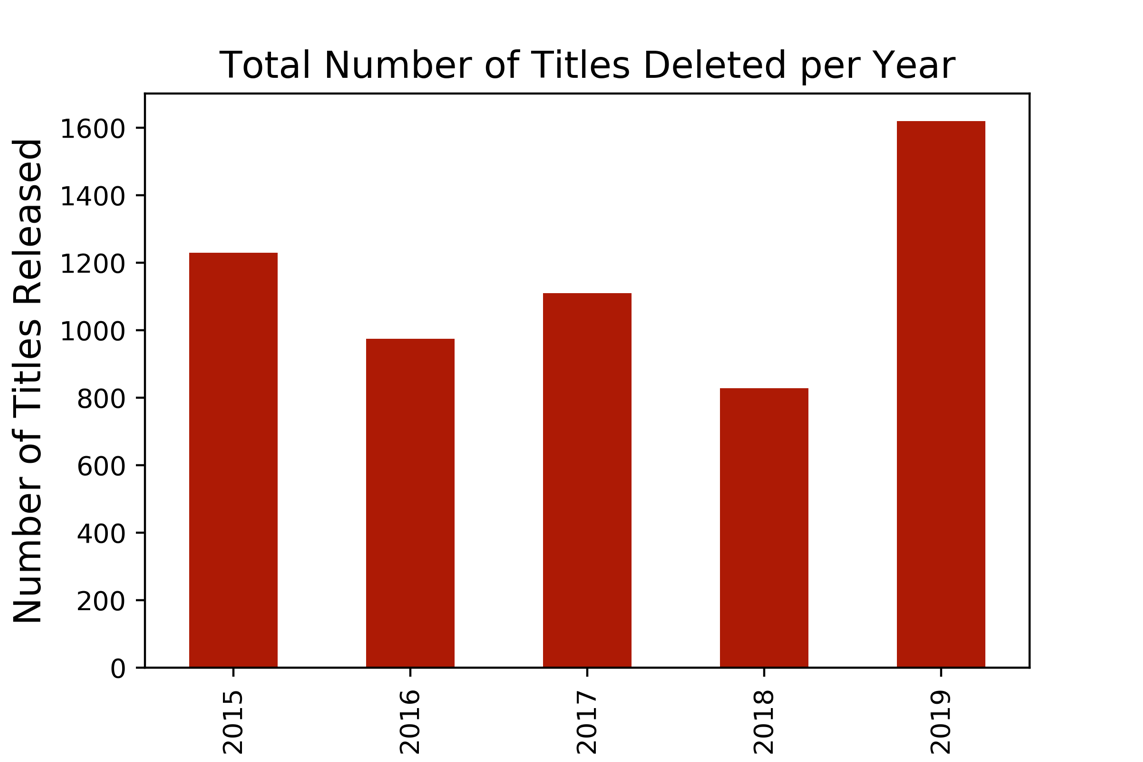 In order to examine the inconsistent strategy in greater detail, we can take a look at the dynamics at a more detailed monthly level. It confirms our initial conclusions regarding the absence of a clear pattern regarding the deletions. However, just like in the case with title releases, we can spot a hike in deletions occurring in 2019. 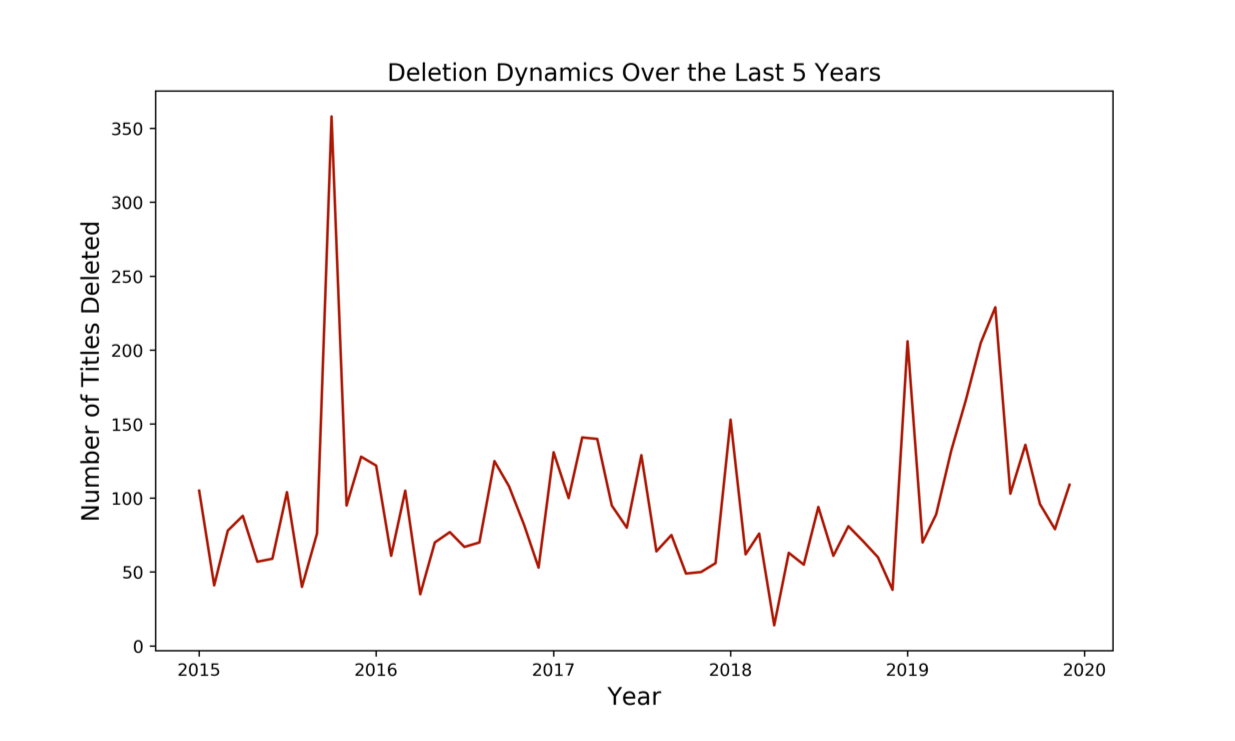 If we break down the deletion numbers by the content type, we can observe the similar disparity between the dynamics of Movie and TV Shows deletions. While Movie deletions have pretty much followed the overall yearly dynamics, number TV Shows deletions have shown lesser flexibility, and in 2016 grew, despite the total number of titles released dropping compared to 2015. 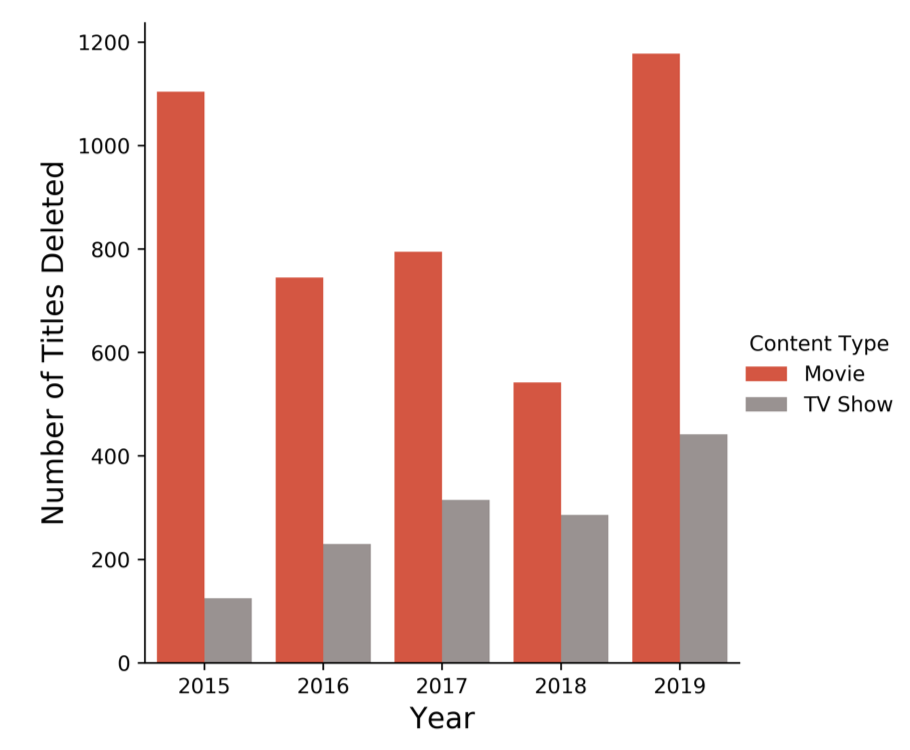 Finally, for deletions, we are also going to take a look at the months, which happen to have the most number of titles leaving the platform. Again, unlike in the case with releases, the month with the most number of average deletions is January. We can make an intelligent guess, that the main reason for titles leaving in January, is the fact that many licensing deals expire at the beginning of the New Year.

Another interesting difference is that one of the months with the most titles leaving - is July. Since the beginning of July is the exact midpoint of the year, we can assume that it also has a lot of licensing deals expiring at this time, which can result in the spike of deletions. 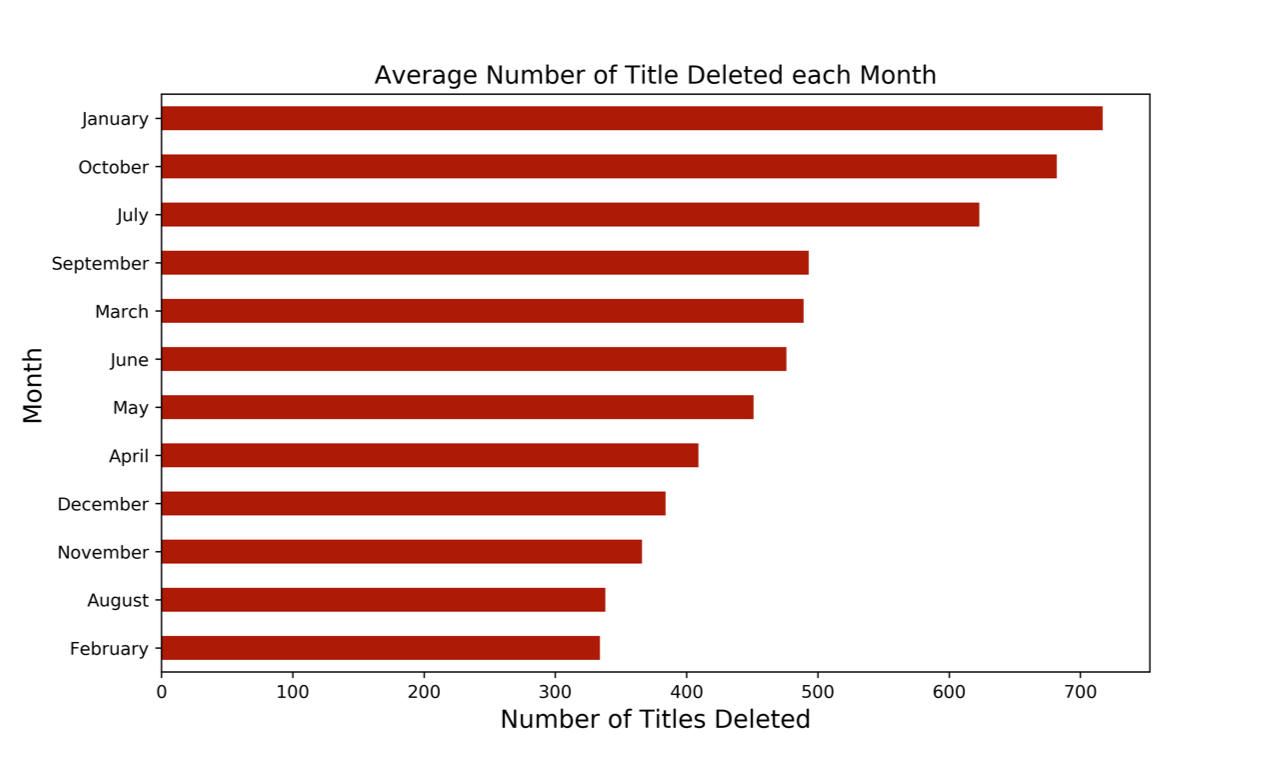 Data Comparison on Releases vs Deletions

Now, it is time to have a direct comparison between addition and deletion dynamics and try to observe critical points of difference between both 0f the strategies.

First, we are building the regression model to observe the presence of the dependency between the number of titles released and the number of titles deleted. As it is visible from the correlation graph, there is an apparent positive correlation between additions and deletions, which allows us to conclude that the more titles are coming to the platform, the more titles are leaving the platform on average. 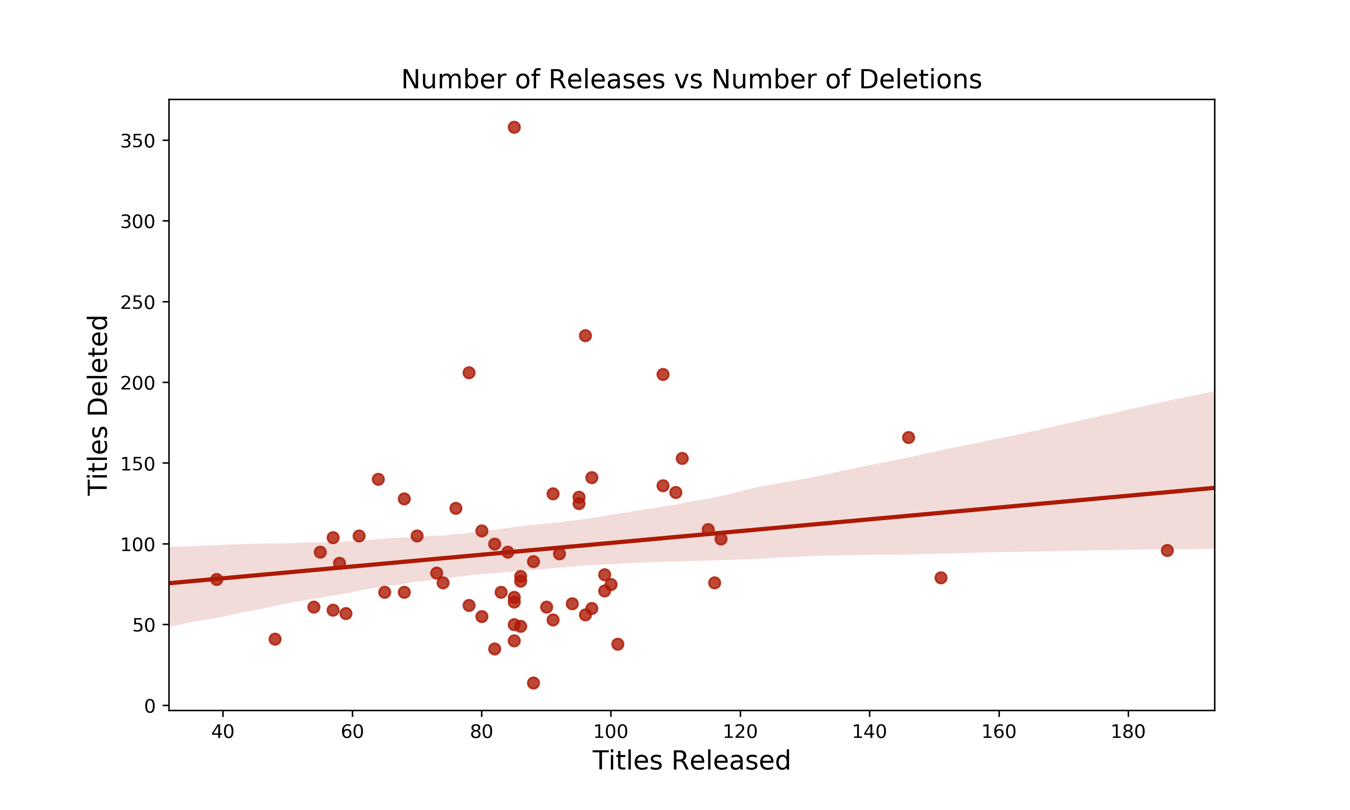 Comparing Addition and Deletions By Year 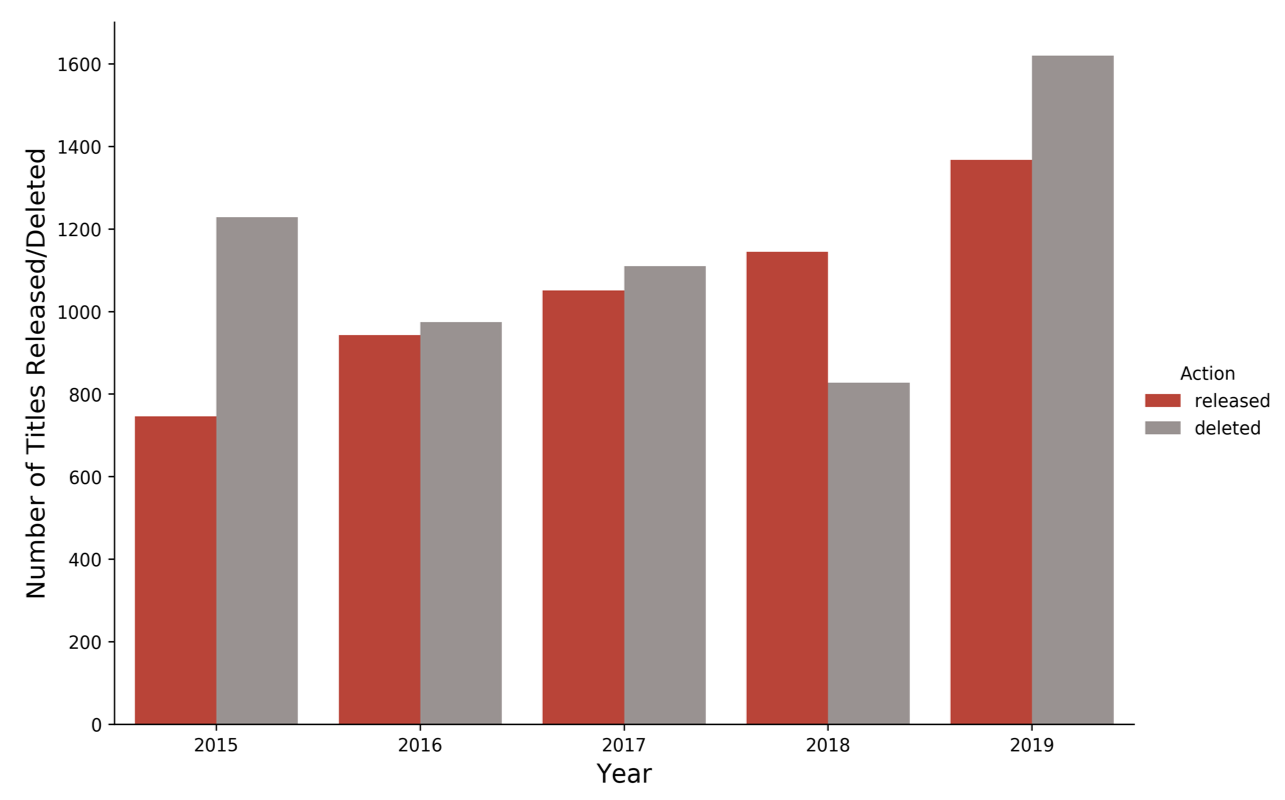 Finally, it is worth comparing the titles release dynamics to titles deletion dynamics on the monthly level, to see which specific months contribute the most to the change of a structure in Netflix content.

As we can see, months that have the most substantial difference in titles leaving vs. the titles arriving are January, July, and October, when Netflix receives the highest net loss in the number of titles available. 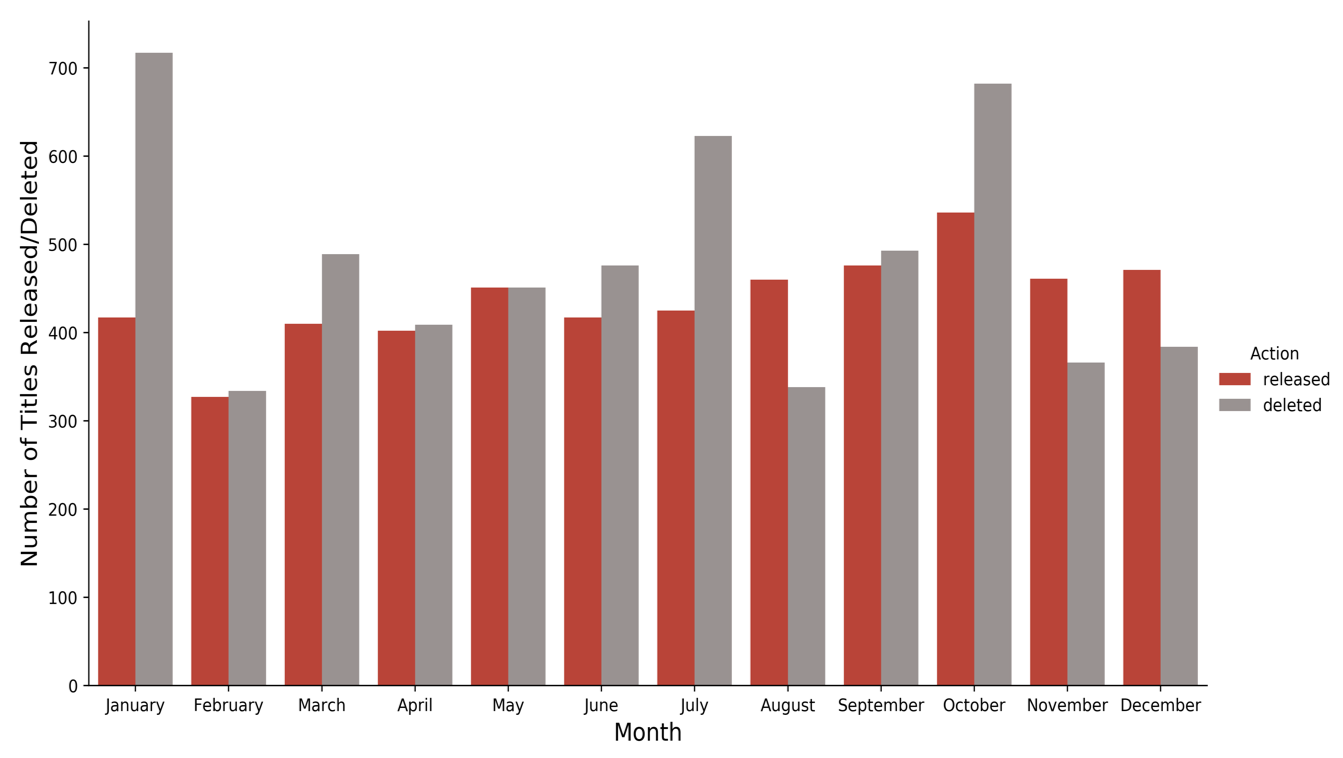 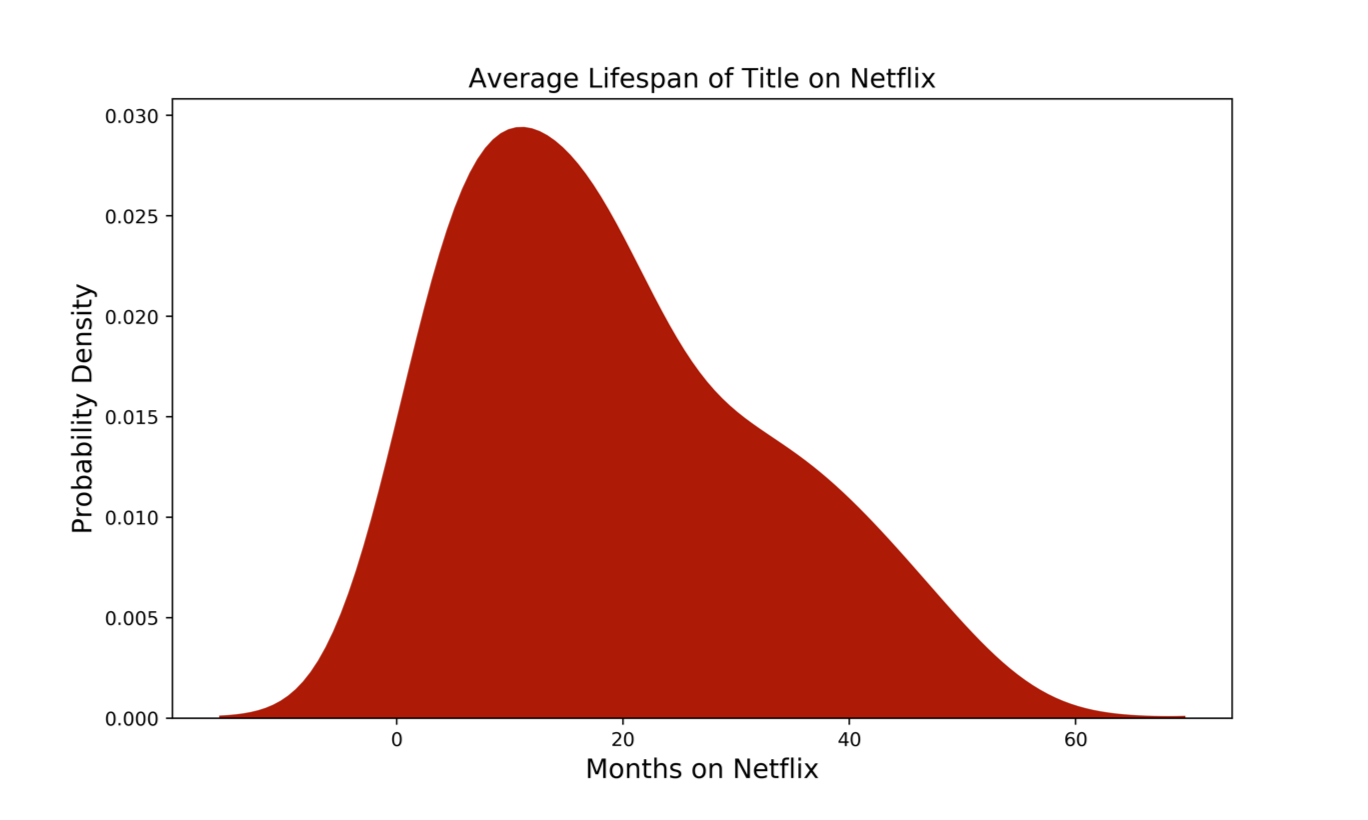 Finally, dividing the lifespan data by the type of content allows us to observe a difference in the strategy between Movies and TV Shows. While the average lifespan for both types of content is similar, the overall range of the lifespan for TV Shows is significantly smaller than for the movies. This disparity can, for example, point to differences in the licensing deals that Netflix is able to make with content owners. Contracts for the Movies seem to be much more flexible and can significantly vary in length, while TV Show deals tend to be concentrated considerably at 12 to 18 months. 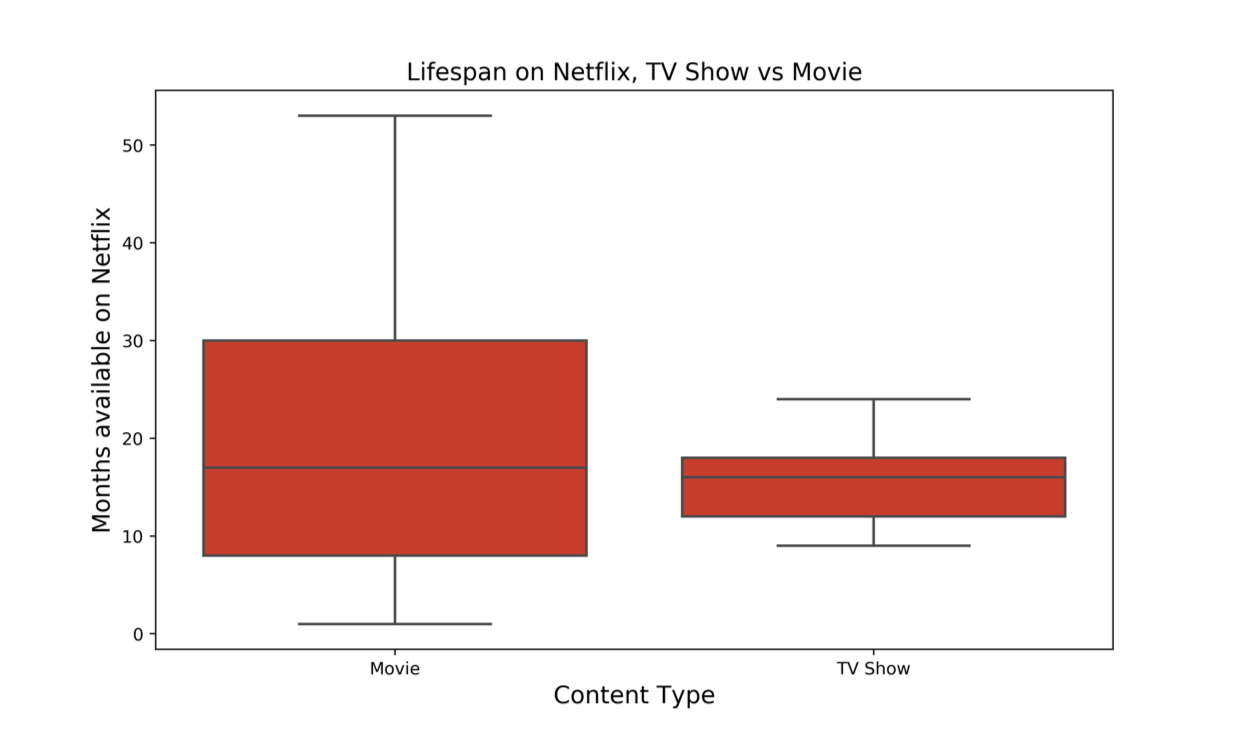 Scraping, compiling and analyzing the data that is not usually available to be viewed on the data aggregation websites, allowed us to uncover several impactful insights, which present an opportunity to discover a number of strategically defined patterns of the Netflix content strategy.

While the number of titles coming to the platform continues to grow, so does the number of titles deleted, resulting in fewer and fewer titles left on Netflix each year. This perfectly aligns with a Netflix strategic shift towards the production of its own content, and with the increased willingness of partner content creators to take their titles aways from Netflix and to put it to proprietary streaming platforms. The best example of it can be shows such as Friends or The Office, both of which are leaving Netflix and moving to NBC's streaming service.

In addition, the strategy differences for TV Shows and Movies also become apparent from analyzing the title's dynamics. Far fewer TV Show titles are being added and deleted to Netflix every year; also, TV Shows don't necessarily follow the overall content dynamics on Netflix. More than that, TV Shows enjoy far less 'flexibility' in the length of the time they spend on the platform.

In further analysis, it will be insightful to take a more in-depth look into the Netflix content dynamics, dividing the dynamics by Netflix Originals and Licensed content, as well as possibly getting more detailed information on the number of subscribers. Additionally, it would be beneficial to take a look at the more extended period, ideally, of course, observing the content dynamics since the very launch of the streaming service.

Thank you for your interest and time that you've devoted to reading my blog post. Please feel free to reach me out via my LinkedIn page and provide feedback or ask any questions that you may have.

Data Scientist with a strong analytical background in the fields of marketing, research and management consulting. Experienced in providing actionable insights derived from data to client organizations, including senior management. Oleksii holds a masters degree in marketing from...
View all posts by Oleksii Khomov >