Data Scientist has been named the best job in America according to Glassdoor’s rankings for three consecutive years. While we know that data scientist are in demand in most countries, a rigorous comparative analysis of the number of positions and salaries of data scientists around the world is needed. In order to figure out the best places for data science career opportunities, we want to answer the following questions: 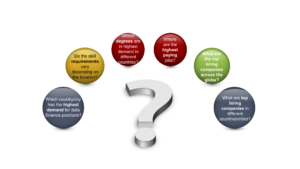 From the spider to the dataset

To answer these questions I used Scrapy to scrape the Indeed website for all the Data Scientist jobs posted in the last 30 days, in 58 countries and 1144 cities, resulting in a 50Mb database of  over 14,000 job postings.

Scraping Indeed for international data presented several challenges. The main ones I had to work around are the following:

This dataset provided important insights about Data Scientist job market around the world.

Do the skill requirements vary depending on the location?

The first question I asked was whether the skill requirements vary depending on the location. As we can see in the following graph, Python is the dominant language, closely followed by machine learning.The second and third most wanted languages are R and SQL. Now, when we compare the skill demand by city in the top 25 cities based on number of postings, while we see the clear dominance of python followed by R and SQL, we can also observe interesting differences between the cities. For example, Singapore’s interest in R is almost as high as in Python. New York and San Francisco postings call for the three languages, Python, R and SQL. Whereas, San Diego shares the interest in R and Python, it shows  low interest in SQL. Redmond has a very high demand for AWS and C, probably related to the fact that one of its largest employers is Amazon with Microsoft competing for cloud talent. Lastly, a word cloud based on all the job postings confirms the absolute general interest in machine learning. 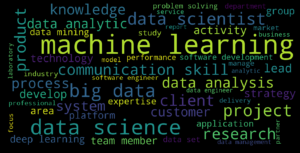 As for the number of job openings, New York is the city with the highest number of postings, with over 1,400 for the past month. NYC is followed by San Francisco and Seattle in the USA, London in Europe, Bengaluru in India, and Singapore. Regarding the title demand, almost 40 percent of the job openings are interested in bachelor's degrees, almost 30 percent in master's degrees and about 25 percent in PhDs. What we want to know next is whether the variability between countries and titles correlates to differences in salaries. For analyzing the salary data, an important limitation was the low number of postings that reported salary (~10%). The salary data shown in these graphs corresponds to the countries of the top 25 cities (per number of postings).  This salary data is the result of averaging the upper limit of the posted salary range and the lower limit of the posted salary range per location and normalizing to annual pay and US $ currency. As expected USA has the highest paying jobs, and the highest paying cities within it are: New York, San Francisco and Seattle. However, if we normalize for cost of living and rent, UK, Singapore and Canada catch up with the US. This trend is also reflected in the cities chart, in which London, Singapore and Toronto stand now almost at the same level as the highest paying cities in the USA. For normalizing for cost of living and rent, the average salary was divided by the Cost of Living Plus Rent for Country Index 2018 (Numbeo). Strikingly, after normalizing for cost of living and rent, the differences in pay between master's and bachelor's are lost. However, if we divide the data between USA (Panel A) and non-USA countries (Panel B), we can see that while in the US a master’s degree is related to a higher pay, in the Non-USA countries, it is not the case, probably due to the fact that most non-USA countries demand master's degrees and the number of postings that require a bachelor's is very reduced. Finally, let’s have a look at the top hiring companies. Considering all the job postings, Amazon, Microsoft and Facebook stand at the top. If we look at the three top companies in the top 10 cities we find: JUUL Labs, Autodesk and Uber for San Francisco and NYU Langone Health, Weill Cornell Medicine and JP Morgan Chase for NY. Summing up, considering that I acquired a solid understanding of Python, R, SQL and Machine Learning at NYC Data Science Academy bootcamp and these skills are required in all countries, and that I have a PhD, which is most valued in USA, UK, Singapore and Canada, and within these countries the highest paying cities are: New York, San Francisco, Seattle, Toronto, London and Singapore, you’ll probably find me in one of these cities, hopefully, not too many months from now! 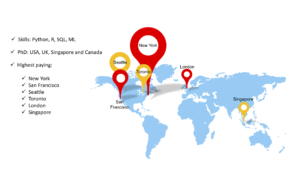 The Spider code can be accessed in this GitHub repository.

The graphs were done with Plotly's graphing library.

4 Facts about the Global Data Science Job Market - Profinit May 18, 2020
[…] the global data science job postings on Indeed.com for language requirements, Python came out as the most frequently required skill. However, the truth is that, ideally, a good data scientist should be familiar with both of these […]