Kaggle Challenge Top 16%: What We Learned

In this article, we outline an approach to feature selection and engineering and machine learning modeling that enabled us to score the top 16% in the Kaggle house price prediction competition.

The Ames Housing Dataset, consisting of 2930 observations of residential properties sold between 2006-2010 in Ames, Iowa, was compiled by Dean de Cock in 2011.

A total of 80 predictors was part of these dataset:

In 2016, Kaggle opened a housing price prediction competition, utilizing this dataset. Participants were provided with a training set and test set--consisting of 1460 and 1459 observations, respectively--and requested to submit sale price predictions on the test set. Submissions are evaluated based upon root-means-squared error (RMSE) between the logarithm of the predicted sale price and the logarithm of the actual price on ca. 50% of the test data.  As such, the lower the RMSE, the higher the ranking on the competition leaderboard. 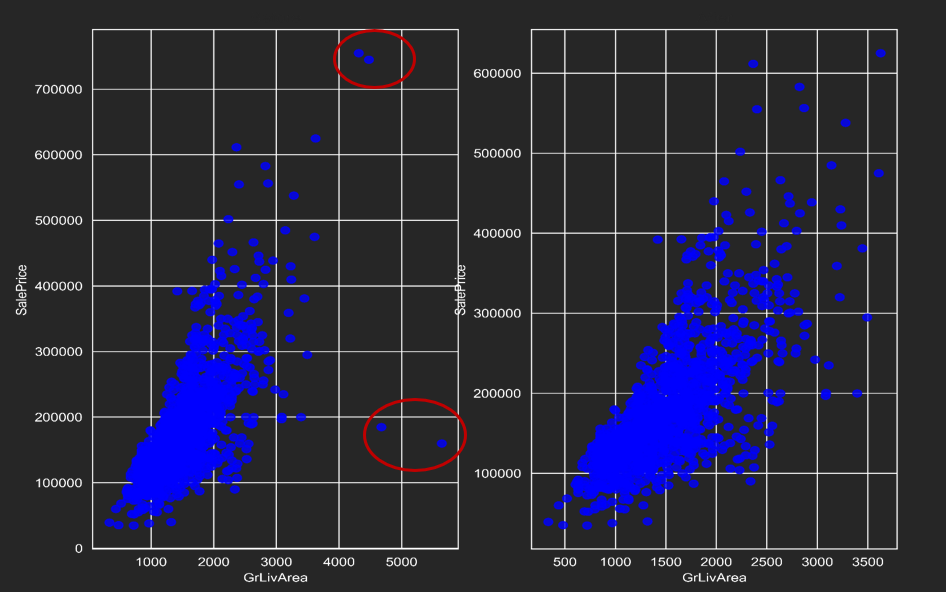 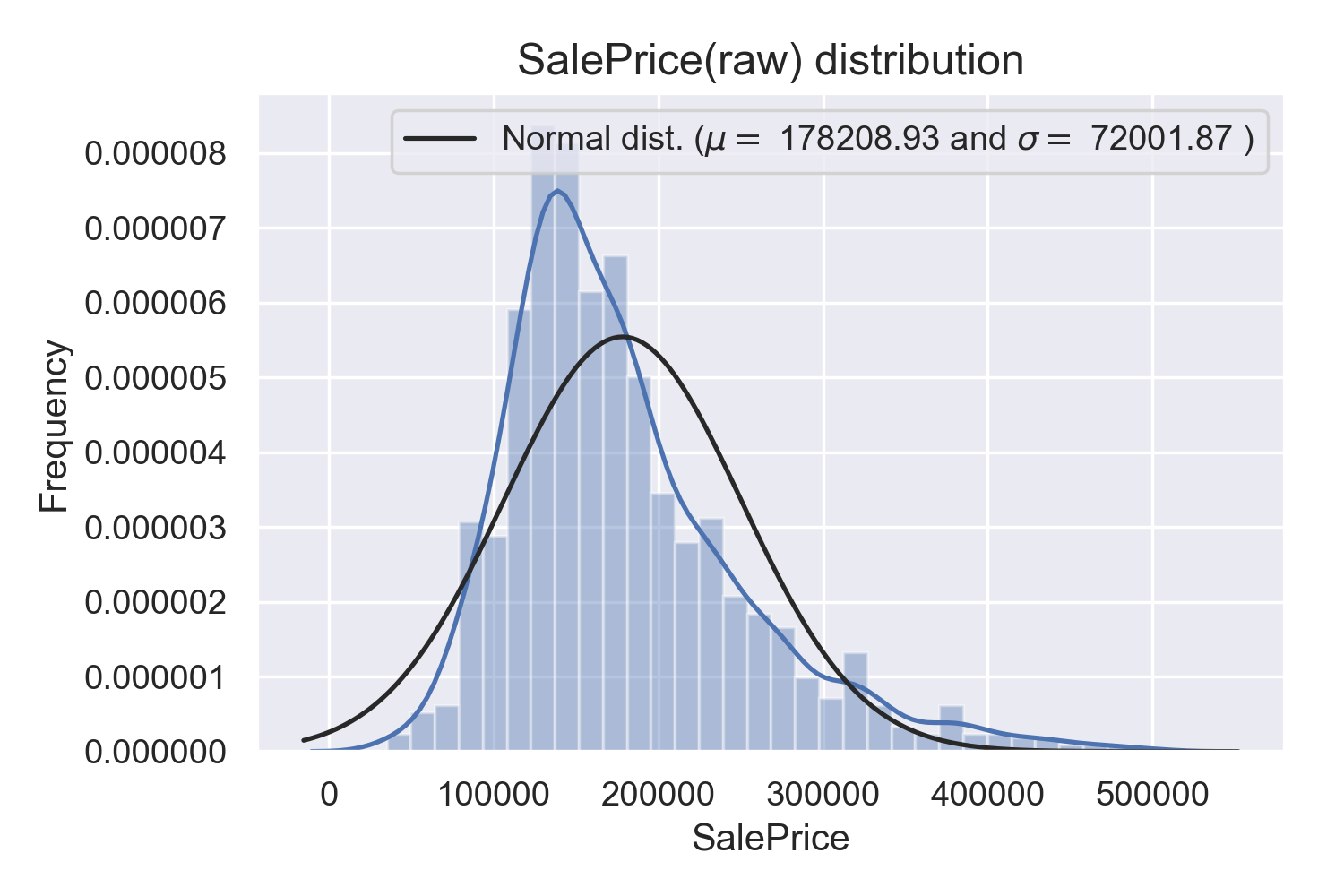 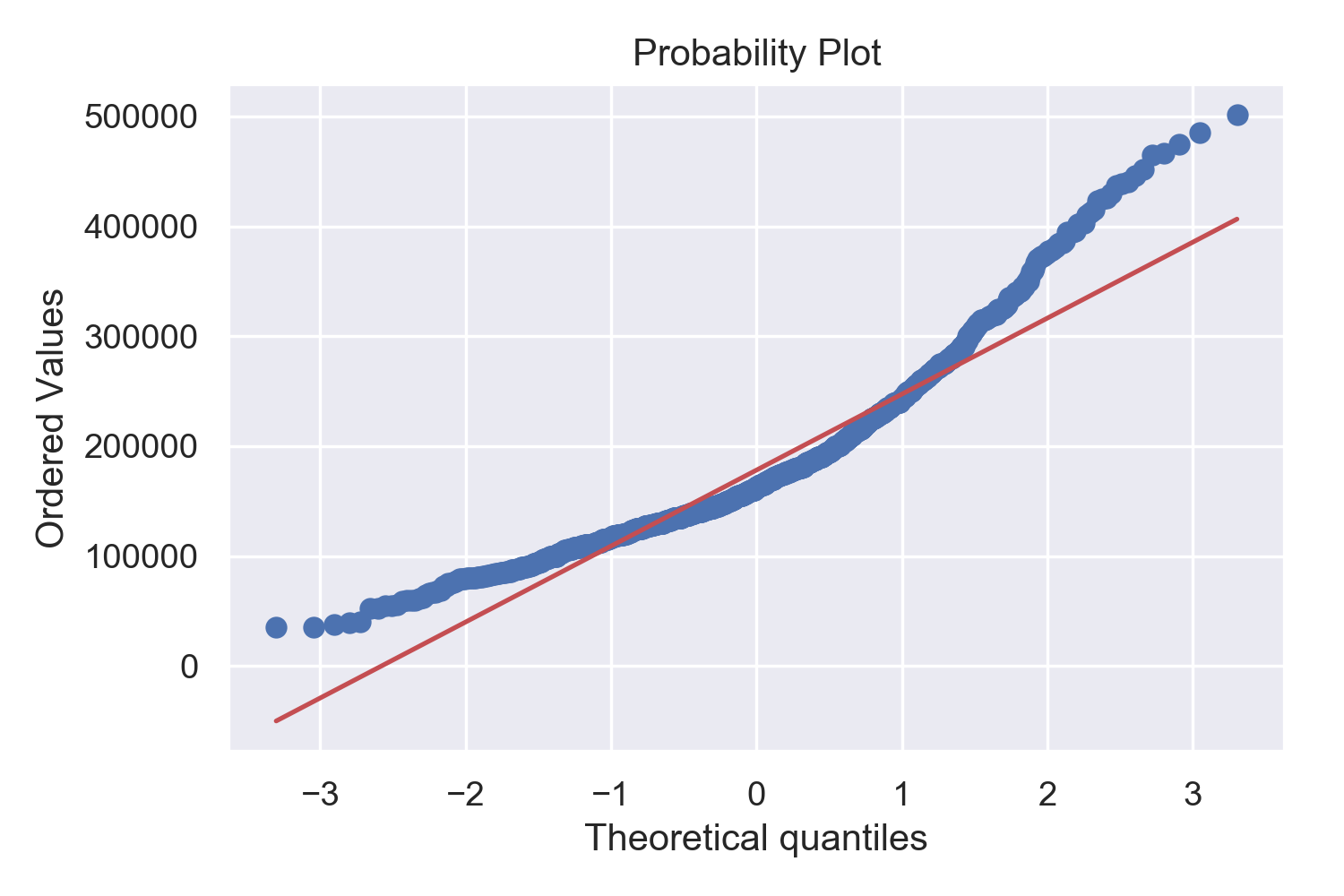 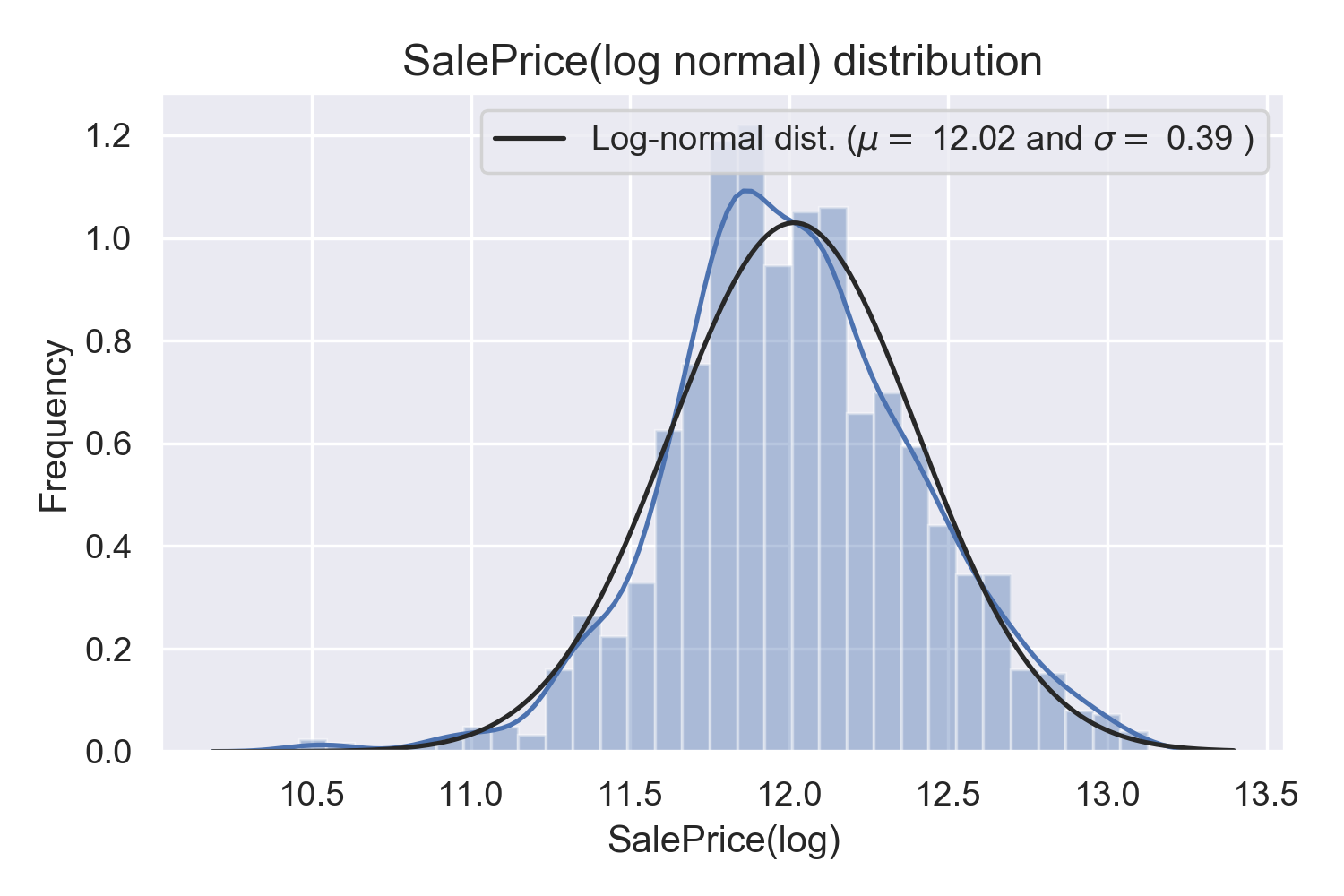 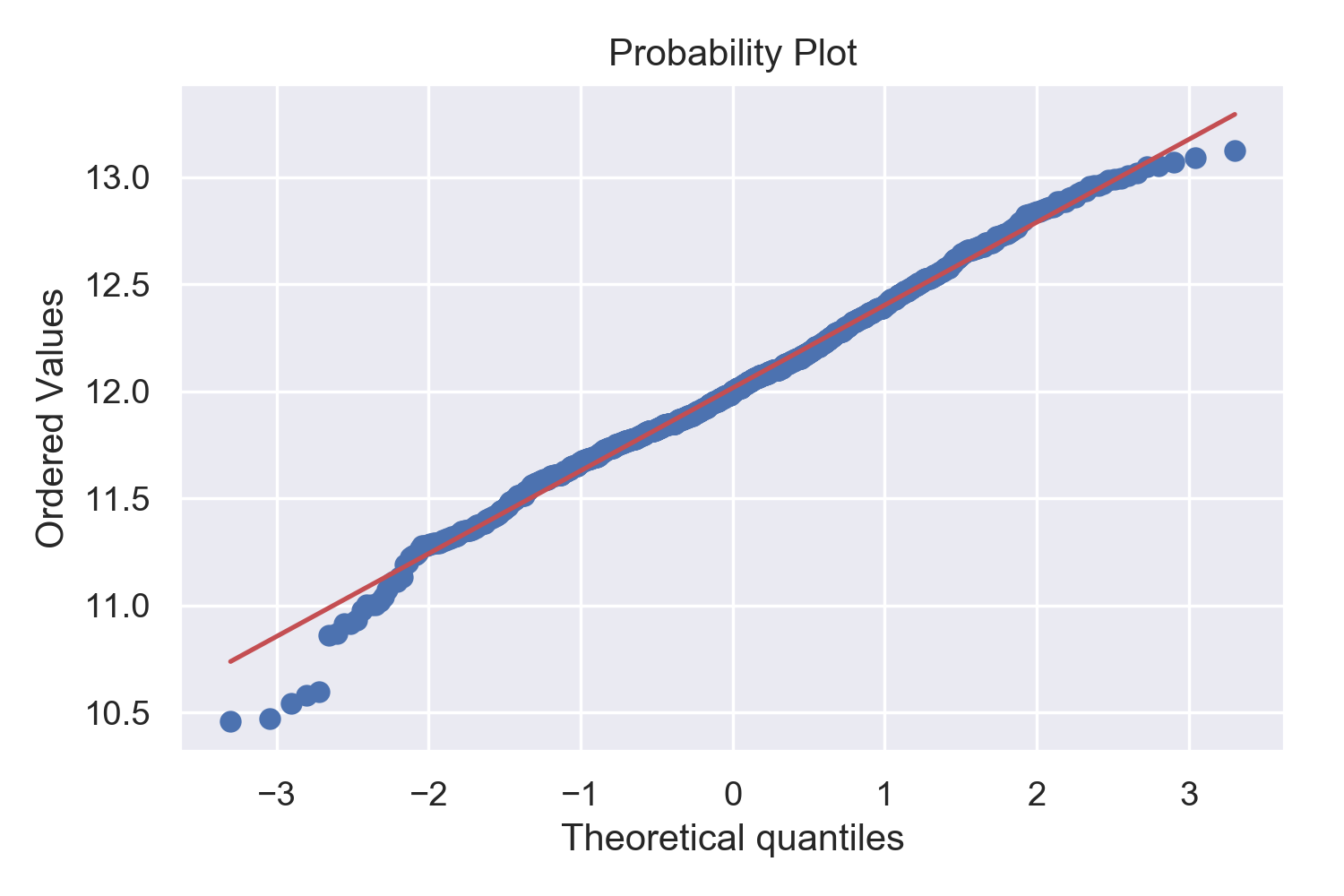 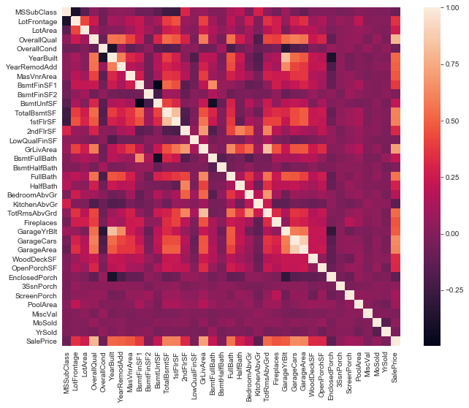 A significant number of columns contained missing values. However, the reasons for and impact, impact, and type of missingness (missing completely at random, missing at random, and missing not at random) varied.

Fill NAs with ‘None’

MSSubClass: Identifies the type of dwelling involved in the sale

From these two columns, we created new variables in the dataset:  Floor, PUD, SFoyer, SLvl, Finish.

We adjusted the skewness of variable greater than 0.85 with a cox-box transformations of 0.15 and created two versions of the datasets: one in which nominal categorical variables were one-hot encoded for linear regression models, and one lacking one-hot encoding for tree-based models. 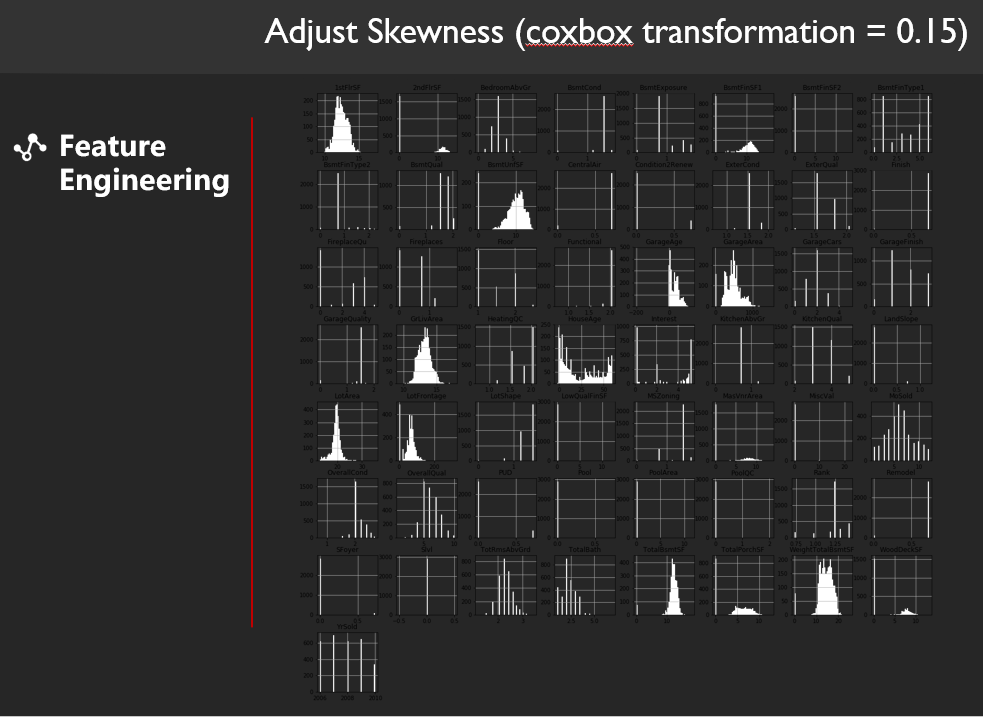 We first decided to test individual models' performances on Kaggle then pick the best performing models and stack them together.

Here are a few example of residual plots for our models: 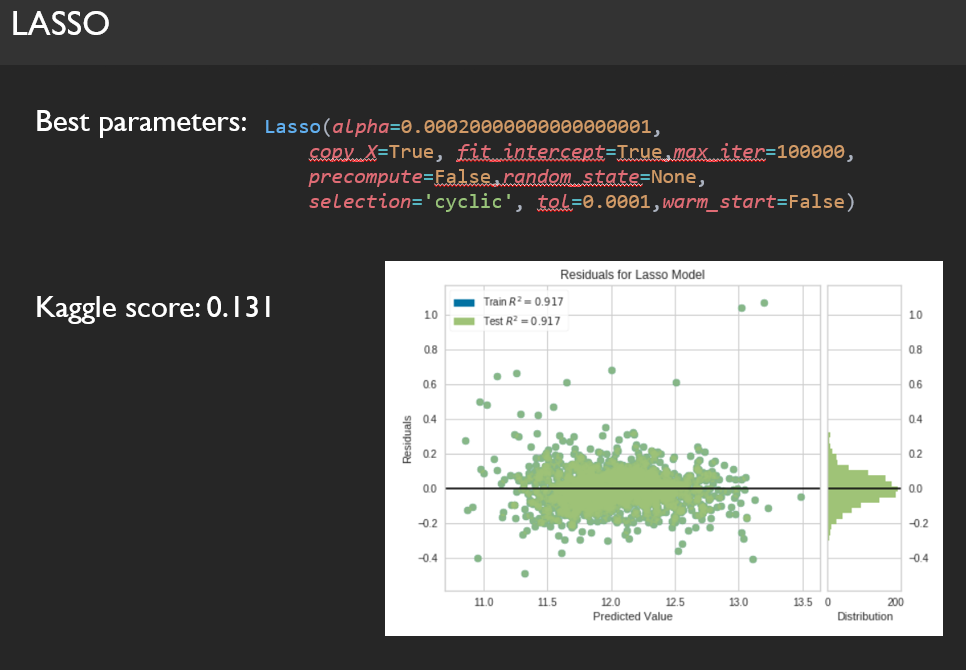 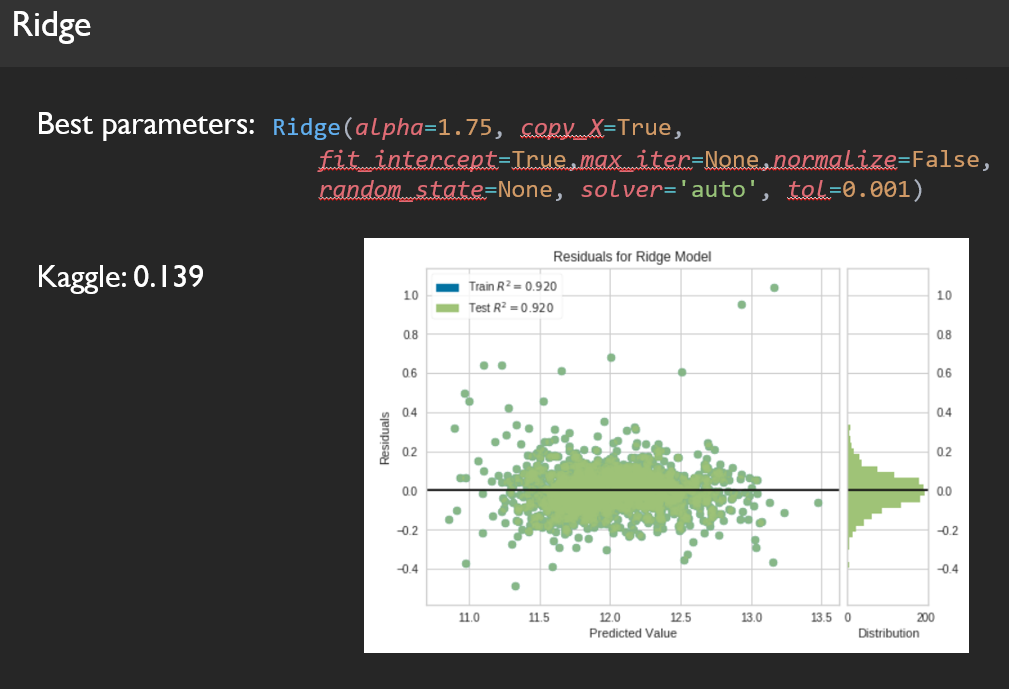 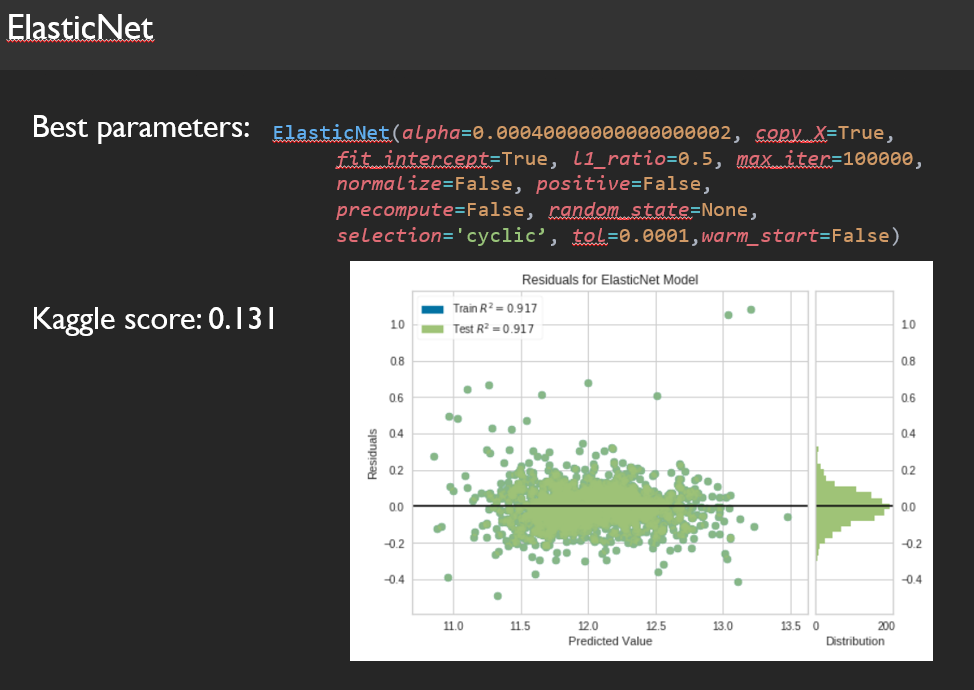 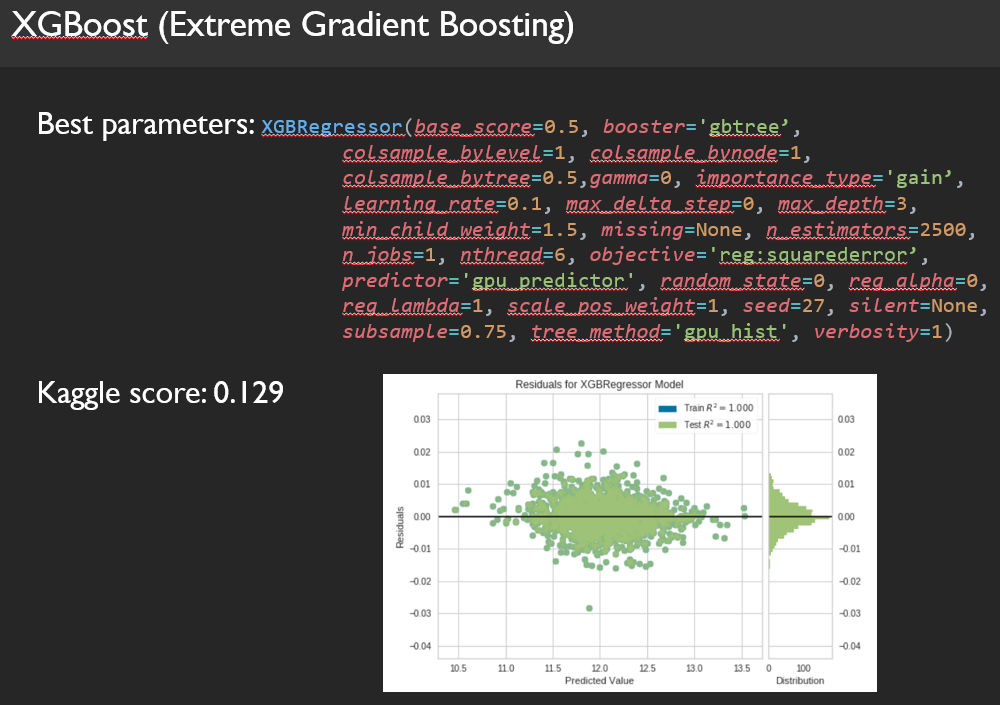 We decided to try randomizedSearchCV on our hyperparameter from better tuning. We re-tuned my parameter for each model, and then we did a voting regressor to find the optimal stacking.

The best obtained Kaggle score was an RMSE of 0.11748. This corresponds to the top 16.6% of submissions to date.

Finally, we have met our objective in this Machine Learning Challenge, being able to apply various models, and strategies to achieve relatively good predictions. However, winning or getting high scores in Kaggle does not necessarily equate to being a good Data Scientist. Knowing how to form a great team that works well together plays the most dominant role in how one succeeds in the field of Data Science.

What We Learn As A Team:

View all posts by Xiangwei Zhong >