Will the NBA Player's salary contribute to the team’s Win?

The NBA which had a lot of issues at stove league just opened. Which team will win the championship this season? Who will win the MVP? Each team has invested heavily in order to win, but the results are unknown. Was their investment appropriate?

Many sports stars surprise people with huge amounts of contracts.
However So are their salaries contributing to the team's victory?
My topic is to learn about the relationship between NBA games (W-L) and salary using Web Scrap. 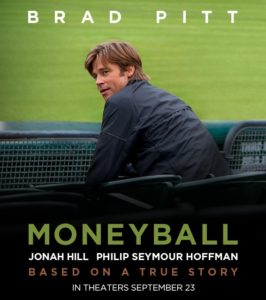 Do you know about the movie Money ball? This is a story about Bill, General Manager of MLB Oakland Athletics.
Because it is a traditional small market, the star players have been taken over by the big market team and it was time to need an alternative. Meanwhile, we used the statistics of sports to find low-salary high-efficiency players and reorganized the team, which became a new trend in MLB.

I used selenium to collect data from three sites. The official data was used mainly, and WS and Salary data were not officially provided and collected elsewhere. 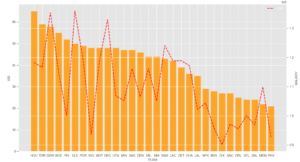 As you can see, the high salary of the team doesn't lead to the highest victory.
GSW / CLE / OKC, etc. invested heavily in the championship, and relatively higher HOU / TOR than their investment. IND had a high multiplier with low salary. This is also a remarkable point. 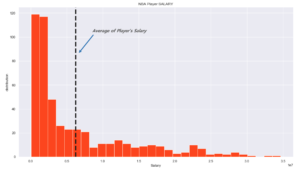 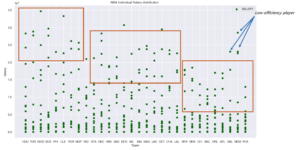 This page is Scatter Plot.
The x-axis indicates the team wins and the y-axis indicates a player's Salary
This graph shows the salary distribution of the overall team players. A relatively low-efficiency player that can't contribute to a team win is also noticeable. But I also know that basketball is a team sport, so I can not claim victory only for those players.

Correlation between Salary and Playing Time 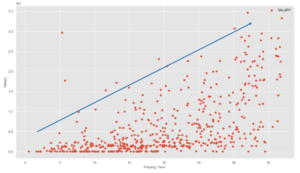 Correlation between Salary and Win 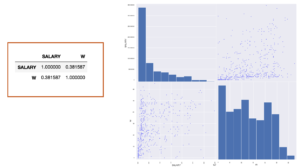 Let's look at the correlation between team win and salary very simply.
W means the number of wins when the player participated in the game. If you look at the relationship, you can't confirm that the player with the highest salary contributes to the team victory.

How can we find out contribute to win? 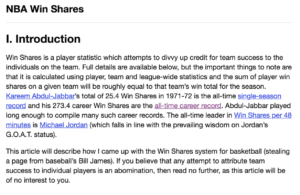 So how can you confirm that you have contributed to the team win?
There are a lot of Stats in Basketball, and it's hard to check them one at a time.
In a similar concept, the indicator WAR is officially used in baseball, but the index I use today is Win share.
WS is an indicator of how much it has contributed to the team's victory, with various stats entering the element, and the formula on the right is one of them. We add the attack index and the defense index to derive a comprehensive win share. 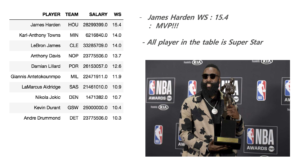 So let's take a look at WS Top 10 for the season.
First place is James Harden of Houston, and as you can see by numbers and salary, he is the NBA superstar.
In addition, He was MVP last Season. It is the players that contributed a lot to the team victory as there are a lot of salaried people. And the high salaried people are ranked in the highest rank. 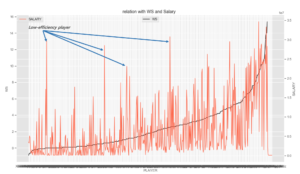 Let's look at the relationship between Win Share and Salary.
As you can see, the salary and WS trends are the same, but there is often a Low Efficiency Player.
On the other hand, with a small salary you can look for players who contribute significantly to your team. 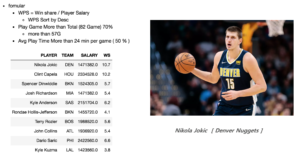 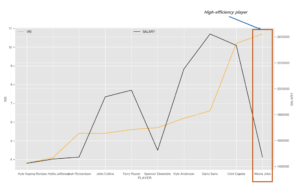 Let's look at the graph. Yokochi shows a remarkable contribution to the team even with a small salary, even if you look at the graph. And one person who stands out is Spencer Dinwiddie. In fact, he is not known but he is a player with enough talent to be a skill champion in NBA All-Star.
As you can see from the record, impressive players were selected.

Modern basketball is evolving right now.  Because of the unique nature of basketball, we can not simply say that the salary contributes to the team win.  There are also many invisible indicators such as mental and leadership for victory. It is difficult to relate salary and victory, but I think it is also fun to watch sports.

View all posts by SangYeon Choi >