The objective of this project is to predict whether a customer made a claim upon an insurance policy. This is a classification problem, and the predicted number could be anywhere from 0.0 to 1.0, representing the probability of a claim. The dataset used for this is synthetic and the features are anonymized for security purposes.

A train dataset is provided with 118 features and one target “claim” with a value of 1 or 0. We are required to implement a binary-classification algorithm that predicts for each example of the test dataset, whether a customer made a claim upon an insurance policy. A '1' value means a claim was made, and '0' means a claim was not made.

All the features in the dataset are of type float64, and the ground truth column, i.e., claim is of type int64. Target Column: Now, let's look at how the target column claim is distributed throughout the dataset. 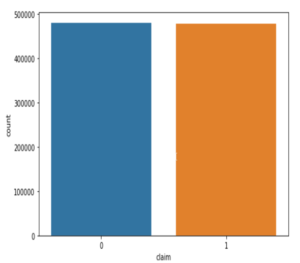 Furthermore, there is no need to classify features into different datatypes (this helps later while processing the dataset) as all features are of type float only.

Let's see how the features are distributed with respect to the target variable. NOTE: Since we have a very large dataset, we will plot these distributions taking a small sample from the dataset. For better estimations, we will take a random sample, preferably of fraction 1/100 of the original dataset. This will help in faster generation of plots.

We noticed earlier that the relation between features and the target variable is most likely weak. To check that further, we'll make use of a correlation plot. Also, this will help us to check which features are strongly related to one another.

We can now safely say that none of the features have a strong correlation among one another, or with the target variable. This marks the end of a fruitless correlation analysis.

Before proceeding any further, it is recommended to split the dataset into a training set and a hold-out cross-validation set. This is to ensure that the model we build won't be adversely affected by data leakage.

Any feature whose value would not actually be available in practice at the time you’d want to use the model to make a prediction, is a feature that can introduce leakage to your model

Now, when we talk about splitting the data into train and test sets, we normally have two options:

The performance of the two techniques typically depends on the size of the dataset.

So, as a conclusion to the above two points, we will use train_test_split for this dataset.

As we saw earlier, most of the features have missing values. We will take care of that now.

Luckily, for the given dataset, we have only numerical features and hence, imputation will be lot simpler. For numerical data, two most suitable imputation techniques that could be used here are mean imputation and median imputation. I will try both these techniques and compare their performance on the validation set. 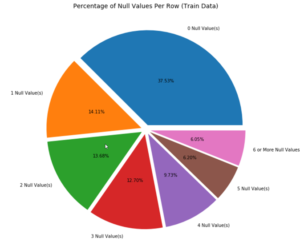 When we talk about a binary class classification problem, the simplest model that comes to mind is Logistic Regression. So, first off, we will use logistic regression as our base model for comparison. Naturally, it won't do very well on such a complex dataset, but it's always better to start from the bottom and build to the top.

Seems that the score for simple Logistic Regression fit on a sample of the training set is close to the score for the model fit on the entire training set. But we did cut off on the training time (approx. 100x faster). This might be the cause of having a well-balanced dataset for the target variable, and thus having taken only a small sample of the dataset we were able to feed much of the useful information about the dataset to our model.

Of course, this may not be entirely true for more complex models, and I don't recommend cutting down on the training examples in such fashion. But, for this dataset only, I believe that if we take a sample of the training set to train our models, then we can train different models for comparison and frequently tweak the hyperparameters without having to wait for long minutes every time. However, this is just a gamble, and I don't recommend adopting this technique for better results.

Another famous classifier is the Naive-Bayes classifier. It has the additional advantage that it is very fast for large datasets such as the one we're working on.

We got a tiny 1% improvement in our score. However, this is far from the performance we would expect from our final model.

Now let's get serious and train more reasonable models. One good practice is to always train a baseline model first on the training set and observe its performance. It gives us a starting step to compare our later models.

None of the models show signs of overfitting. Out of the three, XGBClassifier gave the best results on the Validation Set. All things considered, if computation speedup is an important priority, XGB can be picked for the cost of a little less roc-auc score.

Due to GPU incompatibility issues, couldn’t train the data with more advanced models such as Light GBM and Cat Boost. Hoping to extend this research to gain better performance.

Data Science enthusiast with 9 years experience in database development and analytics. Proficient with data visualization and machine learning techniques in Python, R and SQL. Experienced in executing data driven solutions to increase efficiency and utility of internal...
View all posts by SWATHI BATTULA >