If you are fortunate enough to be planning a ski trip (or snowboarding, which is actually better and more fun!), some of the first questions that need to be answered are "where" and "when."  Other factors such as skiing ability level, type of group/vacation (i.e. family vacation, bachelor party, spring break, etc) also impact the ski trip decision-making process. In order to facilitate the process, a popular skiing website (www.onthesnow.com) was "scraped" to help determine optimal destinations specific to a user's parameters.

Data on a total of 621 ski resorts was collected.  The ski resort data was subdivided into 7 main regions:

The following images for one specific ski resort are meant to illustrate the type of data collected for all 621 ski resorts:

The ski resort data collected helps answer the "where" question.  For example, if you are going on a family trip with children, the optimal destination for your ski trip is going to be to be very different from a buddies trip where all skiers are of expert skiing ability.  For a family trip, a resort with more beginner type ski runs located in a more populated ski town might be most appropriate.  For a ski-focused, buddies trip, a resort with the most vertical drop and expert terrain might be most appropriate.

There are lots of factors to consider when planning a ski vacation--time of year, budget, high chance for some snow vs a chance for lots of snow, children in your party, skiing ability, etc.  As mentioned earlier, a big factor in determining a destination for a ski trip is snowfall; the more snowfall the better.  In order to narrow our search for the optimal destination, a simple box plot of the 7 regions' average annual snowfall was constructed (see figure below): 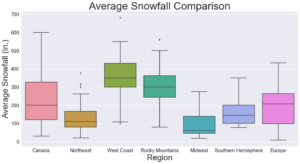 If you are not familiar with how to read a box plot, see figure below for an explanation: 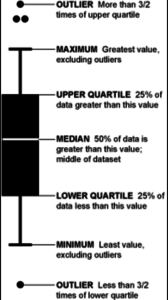 As evidenced by the average snowfall box plot, the West Coast and Rocky Mountain regions in the USA receive the most cumulative annual snowfall on average.  There are observations (ski resorts) that receive comparable annual snowfall located in the Canada and Europe regions as the upper quartile and top line of the box plot indicate.  However, assuming that the user is located in the USA, the added cost of travel to get to Europe or Canada precludes them from consideration.

Another major factor to consider is lift ticket price. Lift ticket prices can cost upwards of $150 per person per day.  It is fairly easy to determine that skiing can get quite expensive quickly, so let's take a look at the density plot below for a comparison of average lift ticket prices by region: 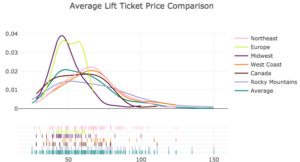 Variance of average annual snow totals for each ski resort is the final aspect of ski resort data to be analyzed in the scope of this project.  The variance in snow totals for all resorts was calculated and grouped by region to get an understanding of which regions get more consistent yearly snowfall on average.  See the box plot below for the snow total variance comparison by region: 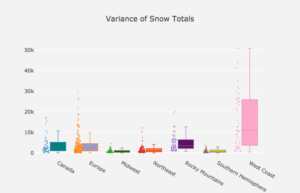 The first thing one might notice in the variance of snow totals box plot is how much bigger the variance is for West Coast ski resorts.  If you think about it, this makes perfect sense.  California experienced one of the most significant droughts in recorded history that spanned from December 2011 - March 2017 (as well as another drought from 2006 - 2010).  The variance of snow totals in West Coast ski resorts can be explained through the Wikipedia quote below:

Increasingly dramatic fluctuations in California weather have been observed in the 21st century. In 2015, California experienced its lowest snowpack in at least 500 years; the 2012–15 period was the driest in at least 1200 years.  However, the winter of 2016–17 was the wettest ever recorded in Northern California, surpassing the previous record set in 1982–83.

Just as snow is important for skiing, base depth is also important since a higher base depth will cover tree stumps, fallen branches, rocks, etc.  The bar chart below illustrates the average monthly snowfall for Rocky Mountain resorts with the average base depth plotted in the orange line: 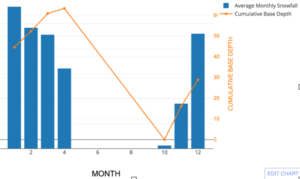 As indicated from the chart above, March may be the optimal month to go skiing since the base depth is near the peak base depth for the season and while still experiencing significant snowfall.  February is also a good second option since the snow totals in February are still good, but the base depth is not quite as high as in March. 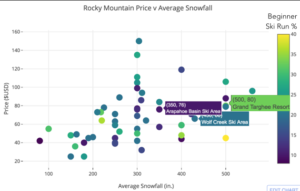 In the graphic above, 3 resorts are highlighted for different types of ski vacations:

Once the user narrows in on a specific resort, graphs can be generated to see how that specific resort's snowfall and base depth develop over seasons to ensure the optimal month is selected for the ski trip.  The following graph shows the cumulative snowfall for every season since 2009: 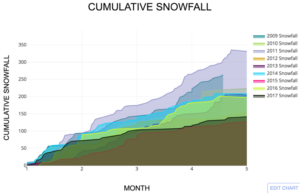 This illustration affirms that February and March receive good snowfall.

To explore how the base depth develops at the user-selected resort, see the illustration below: 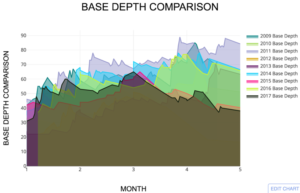 For this specific ski resort, the ski trip timing of February or March is maintained.  The user may want to consider taking the trip towards the beginning of March since the base depth has declined towards the end of March in seasons past, but the base depth should still be solid through all of March.

If I were the user planning a ski trip, I would book flights to Colorado and go skiing at Wolf Creek in late February or early March since Wolf Creek offers challenging terrain and receives the highest snow totals.  However, the decision about where to go skiing should take into account the goals and make-up of the group.