Allstate claims severity was a Kaggle competition that was open in 2016. The objective of this competition was to perform analytics to predict a model for the cost and the severity of claims. Allstate wants to develop automated methods of predicting the cost, and hence severity, of claims and claim service.

The training dataset contained 188,318 claim records. The prediction task was to find the loss for each of the 126546 claims in the test data set.

The scoring was done based on accuracy of submissions that were made on claim severity of a separate test file that was provided. This file was missing the column named loss.

All the features  in the dataset were unknown making it difficult to provide insights into the data. However, there were no missing or null data in the training dataset making it easier to model. The following plots were obtained to ensure the response variable loss is predictable. To prevent high leverage from the outliers, a log transformation on ‘loss’ was performed, so it can be more normal distributed without changing the order. Both plots - with and without log transformation is as shown below 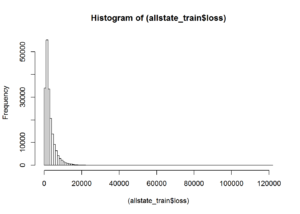 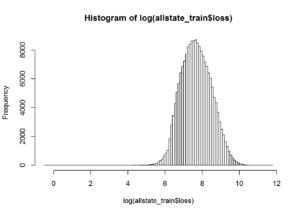 a. ANOVA test for categorical predictors

This test was performed on the categorical variables to determine whether there are any statistically significant differences between the means of categorical (unrelated) groups.

We can check if the above variables are displayed in variable importance plots generated using modeling .

b. QQ plot and residual vs fitted plot using Anova for categorical predictors 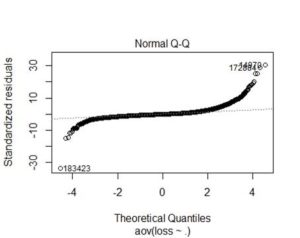 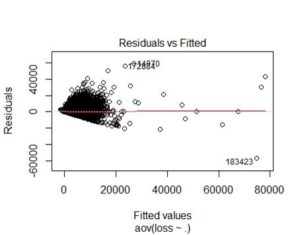 These plot are generated to find the variance of categorical predictors with respect to the response variable loss. The QQ plot shows that the variance is minimal and it is normally distributed.

The residual vs fitted values has good spread of residuals around the horizontal line indicating that the relation between the categorical predictors and the response variable follows a linear relationship. 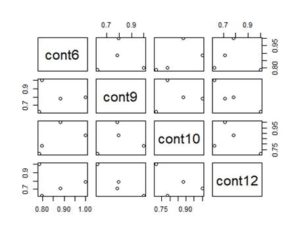 The models used are:

b. Lasso and ridge regression

Adjusted R square is 0.4574 which is low indicating high variance in the data using this model 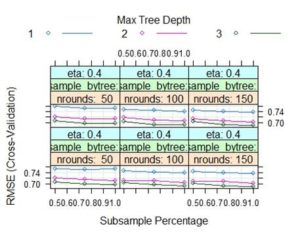 Annie George has more than a decade of experience using mainframe technology and databases such as DB2 and SQLServer to achieve results for organizations in the private sectors. Annie completed her Bachelors in Civil Engineering but she found...
View all posts by Annie George >