Which factors contribute to the sale price of a house? There are plenty of answers: size matters, as do the building materials. Location is important. Does it have a backyard? A swimming pool? What’s the garage size like? How old is it? As you can see, the number of ways you can assess a house’s price quickly gets out of hand. It’s nearly impossible to accurately and heuristically judge a house given a large set of variables. But is there a way to look at those variables simultaneously and quantitatively to accurately predict the market sale price?

The answer is yes. The power of machine learning provides us with the tools we need to look at a large data set and spit out a predicted value. Using a dataset containing information on houses in Ames, Iowa, our team leveraged different machine learning techniques to predict respective sale prices.

Upon receiving the dataset, we first performed an exploratory data analysis to assess the completeness of the data, and to see if any variables needed to be altered so that they would be usable by our models. For example, categorical variables would need to be dummified or converted to ordinal format, and certain numerical variables might need to be transformed to ensure a usable distribution.

Next, we identified or engineered important features and conversely dropped variables which did not strongly correlate with sale price.

With a condensed dataset, we then began applying different types of machine learning models to the data to get a sense of which models had the most predictive power. Critically, we performed a series of rounds where we tuned model hyperparameters iteratively to minimize our prediction error. After identifying the most successful models, we ensembled different model combinations together to further improve our predictions.

Finally, with a set of sale price predictions, we submitted the values to Kaggle to see how well we fared against the competition.

The data for this project came from a Kaggle competition, pre-split evenly into a training set and test set with 1460 observations and 79 features.

We first explored our target variable, Sale Price. In order to meet a key requirement of regressive models, we applied a logarithmic transform to this variable. This gave us a more normal distribution from which we could train our model.

The 79 features were a mix of 28 continuous and 51 categorical variables. 34 features contained missing values, and our team used a variety of techniques to handle this, including dropping variables outright that had 99%+ missingness (e.g. Utilities) and the application of imputation methods on features we deemed critical for our analysis (e.g. Lot Frontage).

We generated the following criteria to transform features:

We established a correlation plot to identify features that were highly correlated with one another. Based on this analysis, we removed a few additional features, allowing us to address multicollinearity. 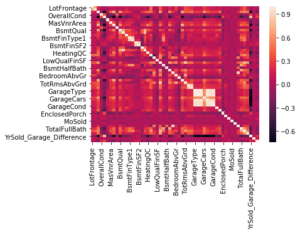 With a clean dataset, we were ready to begin modeling our data.

The four models we combined in each of our meta-models were Ridge Regression, Lasso Regression, Random Forest Regression and Gradient Boosting Regression. We optimized each of our base models by performing a grid search and 5-fold cross validation to find the optimal hyperparameters that yielded the best prediction. Next, we ensembled (or “stacked”) different models into meta-models. In the first meta-model, we ensembled the models by averaging their predictions.  In the second meta-model, we stacked the four models and used multiple linear regression to make our final prediction. For a more detailed model-by-model breakdown, see directly below.

The first model that we used was Ridge Regression.  Ridge Regression minimizes the sum of the RSS and the l2 penalty, which is the sum of squared coefficient estimates.  By finding the value for lambda that minimizes this sum, the model aims to shrink the group of coefficients in our model, which prevents the model from overfitting and allows for more robust predictions. After tuning the model, we found that the optimal value for alpha(lambda) was 9.48 which resulted in an RMSE of 0.1207. Although Ridge Regression is able to shrink coefficients such that they asymptotically approach zero, it cannot set coefficients exactly to zero like the next model.

The first meta-model averaged the predictions of the four base models.  We weighted each of our predictions equally. If we were to continue to develop this meta-model, we would perform a grid-search using cross validation to find the weights that yielded the optimal result via a weighted average of the predictions. This meta-model yielded an RMSE of 0.12582 when submitted to Kaggle.

The second meta-model stacked the base models.  We took the predictions of each of our individual models and created a four-dimensional matrix.  We then performed multiple linear regression to yield our final prediction. When we submitted this model to Kaggle, we yielded an RMSE of 0.1267.

Our team used this opportunity to simulate a real-life data science project. It was a great opportunity to learn from one another and collaborate to productionalize machine learning algorithms.

In order to effectively predict residential home prices, it's important to examine external factors as well. This includes supply and demand indicators such as construction pipeline, net absorption, days on market. Furthermore, when predicting something like home prices, it’s important to take into account the local economy. This would include investigating job growth, income levels, and family-mix in the local area.

However, given limited resources (a relatively small dataset) we made do with what we had. The project was fantastic practice in tweaking models to maximize predictive power and minimize model overfitting. These skills will surely prove useful as we go on to future projects in the data science field.

Raj has 8 years of experience in solving challenging problems and accelerating business growth through data-driven analyses. Raj has a M.S. in Business Analytics from Fordham University in New York City and a B.S. in Economics and Applied...
View all posts by Raj Tiwari >

I love using data to answer questions! Being a former PHD student in sociology at the University of Notre Dame, I am inherently fascinated, and trained, in analyzing and understanding human behavior. More than looking at data strictly...
View all posts by William Kye >