A recent article from Harvard Business Review stated that no industry is immune to digital transformation and neither can venues turn on their blind eye to how their business models are constantly being challenged. Especially, location-based marketing (check-ins) has shown to be a key element in digital marketing to leverage the power of So-Me platforms.

In this blog, which is a summary of my first project delivery at NYC Data Science Academy fall 2017, I investigate data from venue check-ins in Tokyo. Given that this domain has unlimited directions to explore, I particularly want to investigate venue check-ins according to location, venue, time, gender and popularity. Thus, the research questions I want to address are the following:

The questions have been processed in R and visualised in a Shiny application.

Based on the answers from these questions, it’s my intention to sum up how venues can take advantage of the insights and utilise the concept of location-based marketing.

Summary of the dataset

My project is based on dataset containing information about 120,000 check-ins in Tokyo from April 2012 until February 2013. For each check-in, I have information about the user and venue category, latitude, longitude and a timestamp feature. Also, I was able to join the dataset with personal features of the user such as the number of followers and followings on Twitter, from which I created a new variable called popularity. Thus, if a person has more followers than followings he is considered popular, vice versa. Lastly, I decomposed my timestamp feature into time of day, weekday and month, so that the final dataset comprises 15 features.

The following map shows check-ins in Tokyo represented by the coloured dots. Each check-in holds information about the specific venue, gender and popularity. The color indicates at what time of day the check-in occurred. Thus, red color presents a check-in during the morning whereas the blue color represents a check-in in the afternoon. On the left-hand side of the application you are able to filter the check-ins to be displayed on the map by popularity, gender and weekday. The idea is to visually search for pattern in the data. The right-hand side of the application summaries the top 5 venues and the total number of check-ins based on the input selection. 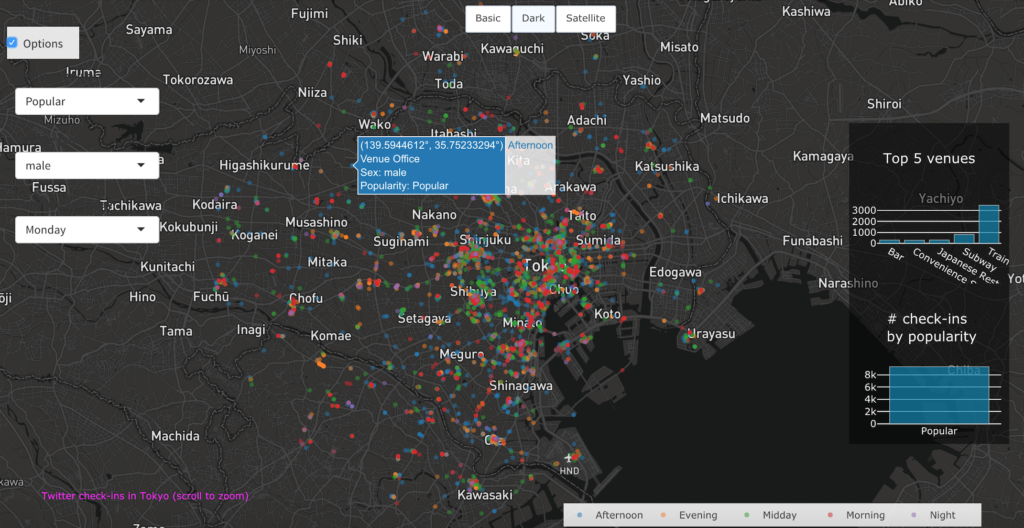 Intuitively, it seems like the data is spread around Tokyo and its boroughs. However, if one tries to filter by e.g. afternoon, there appears to be certain areas where check-ins happen more frequently. Especially in some of the outer boroughs as well as the city center the number of check-ins occur more often.

Let's hang out at the train station!

The Tokyo map didn't quite capture the best visited venues. Likewise, it would also be interesting to explore how the check-ins are distributed throughout the day. By grouping by distinct venues and stack the time of day for each venue, the following bar chart shows some interesting findings. 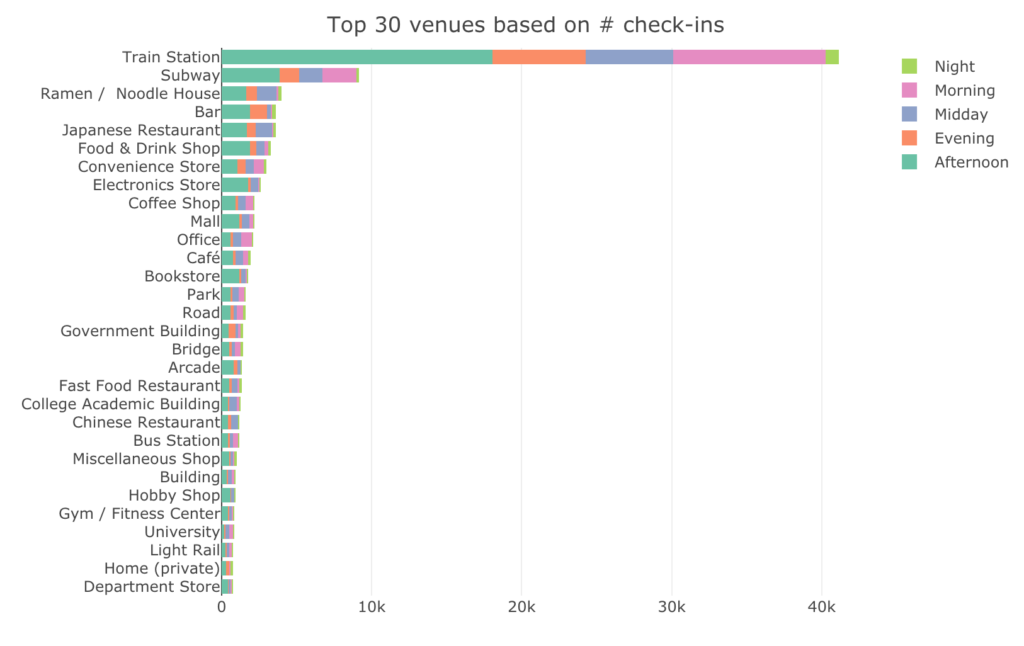 In order to get a more sophisticated overview of the rest of the top venues, let's filter out train stations and subways. 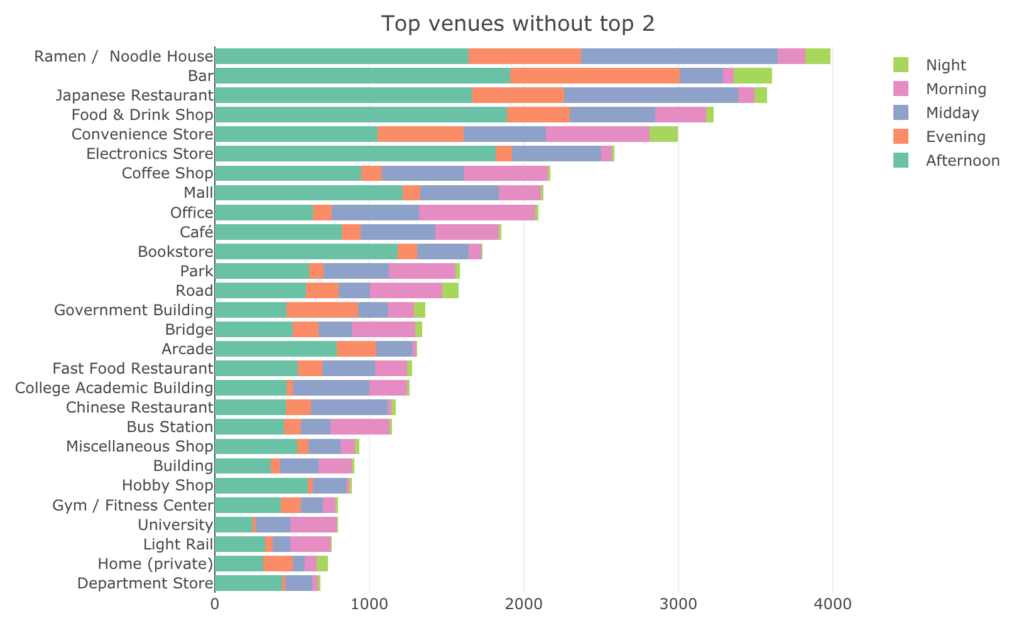 The check-ins appear to follow a somewhat expected pattern, where check-ins during the morning typically happens either on the way to or at the office or at a convenience store, at a restaurant during the midday, well distributed by different venues during the afternoon and centered around restaurants and bars in the evening. Overall, people are not prone to check-in when they are at home or during their regular weekday tasks such as being at the gym and at various groceries. 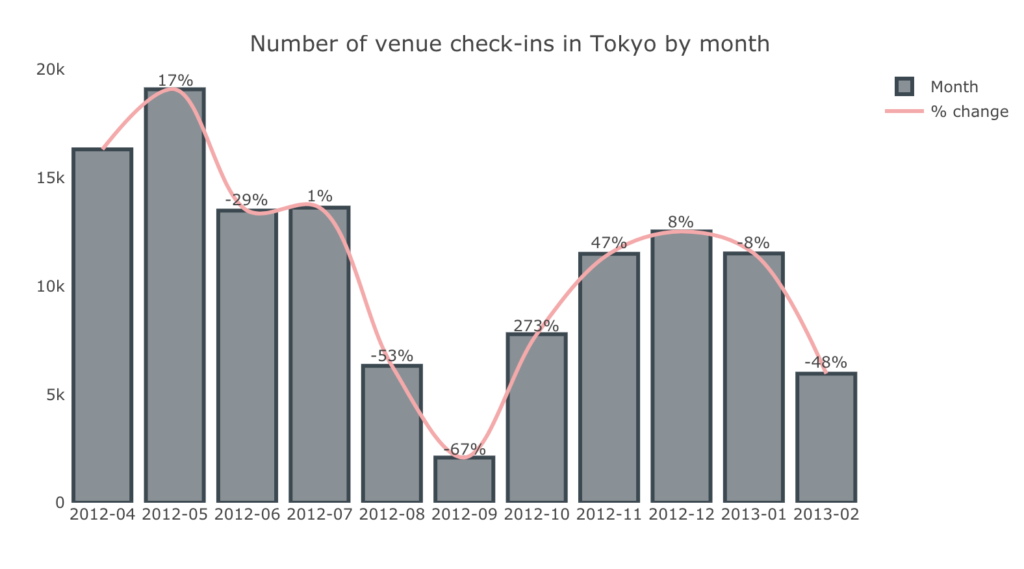 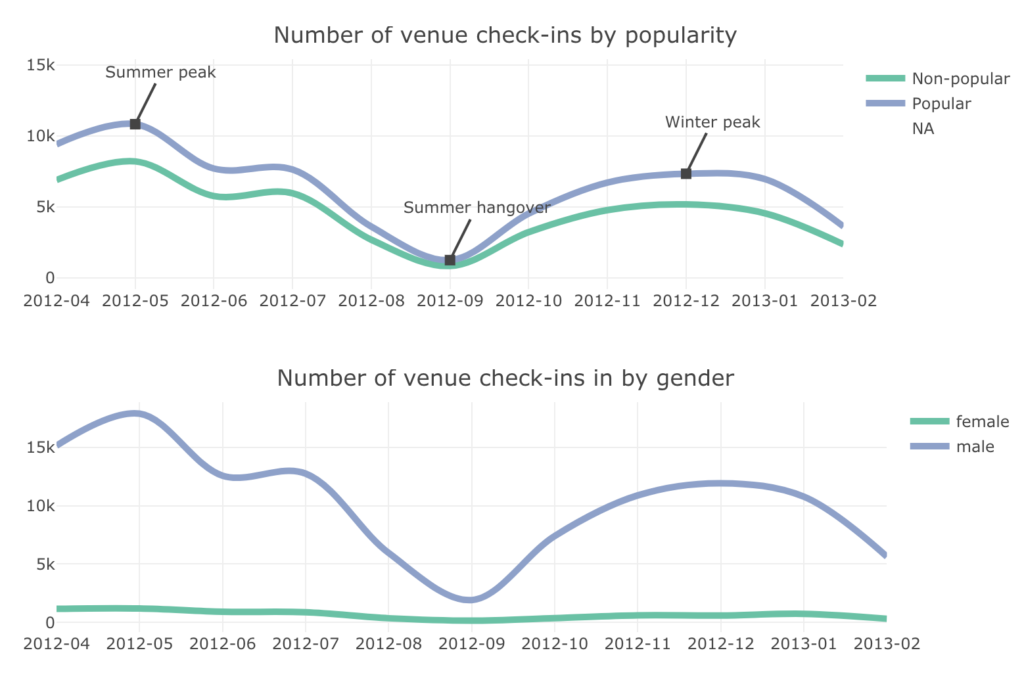 Since the dataset is heavily imbalanced by a majority of males, we need to be careful about generalisation. But it is not excluded that Japanese males do check-in more often than females and therefore appear more frequently is the dataset.

Utilising the insights of check-in data

By only exploring a small number of features, check-in data has shown to be a powerful component to extract insights about user characteristics and behaviour. Location-based marketing has several benefits to a venue such as additional marketing exposure, implicit public acknowledgement and the opportunity for venues to offer real-time sales offerings. As a way to flatten out the seasonality, an idea could be to display offline advertisements on price discounts if the consumer shows the venue that he has checked-in. In that the venue create additional sales but at the same they get additional market exposure through the customer’s social network.

Furthermore, since the majority of check-ins are done by males, they obviously represent the primary target group for venues. However, females should still be considered as a latent segment. Also, since popular people tend to check-in more often, venues can benefit from this insight by directing their marketing effort towards popular people since they have a bigger social network and thereby constitute a bigger indirect marketing channel.

View all posts by Mads Helt >