Data and Emergencies: Where FEMA Acts the Most, and Why

Created on April 1, 1979 by President Jimmy Carter, the Federal Emergency Management Agency's (FEMA) mission was clear, and their mission statement just as short: 'Helping people before, during, and after disasters'. While officially organized 41 years ago, their records date back to emergencies declared as early as January 1, 1953.

But what if emergencies could be predicted. If a pattern in emergencies can be detected and a disaster predicted, federal funds could possibly be saved by proactively safe-guarding disaster zones. The total cost of damages attributed to Hurricane Katrina in 2005 surpass an astounding $160 billion [1]. And maybe even more important than the financial cost: proactive protection could save lives. However, after dissecting the organization's allocation of emergency resources for the more than 4,000 registered emergencies, the distribution might not be what was expected.

If the average American was asked what the most emergency has been declared the most, would they have answered, "Fire"? In the past 68 years, fire emergencies have actually been declared 1382 times, more than 1/4 of all emergencies. Surprisingly, second and third place are due to severe storms and flooding respectively. And with the top three categories combined, more than 70% of all emergencies are accounted. Hurricanes, in fourth place at only 332 emergencies declared, drop in frequency by more than half of its predecessor.

While hurricanes maybe hold the attention of news channels and papers longer, they occur far less frequently than the average bad storm. Additionally, hurricanes come with a considerable amount of notice, unlike flash floods.

Interestingly, a new category established this year, the 'biological disaster', is already ranked seventh place in total emergency declarations due to COVID-19. 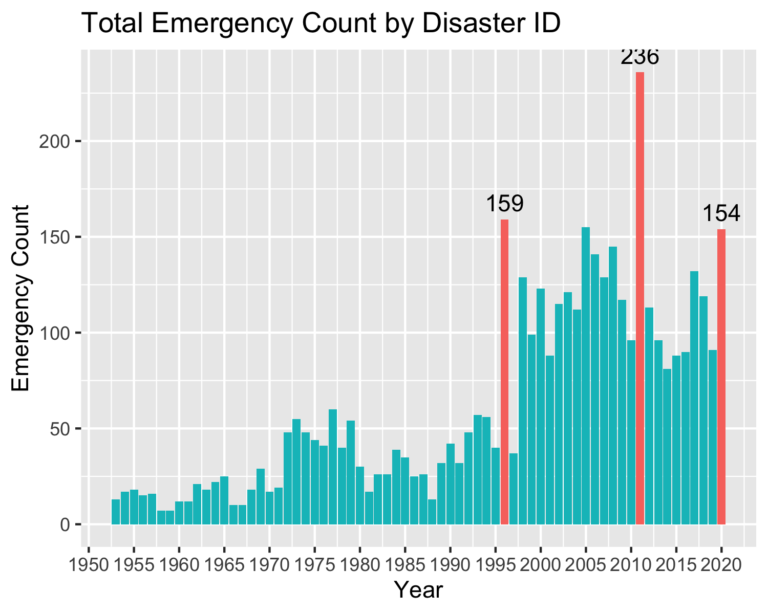 While a graph can't explicitly diagnose the cause for an increase in emergency declarations, it does at the very least confirm the increase. In particular, three years stand out as having an incredible rise in emergencies. A total of 159 emergencies were declared in 1996, a considerable jump from all years prior. 2011 also saw a jump in case numbers, in fact more than double the previous year's count.

And within the first five months of 2020, over 154 emergencies have been declared, mostly because of complications from COVID-19. Excluding these three years, the mean emergency count is 58 per year. Each emergency declaration, however, can encompass anywhere from one county to all the counties in a state. FEMA assigns a unique ID number to each emergency declared. The model above shows the tally of every emergency declaration from the year 1953 to May 2020.

However, if we reframe our look to counting total individual counties affected by disasters rather than unique FEMA disaster IDs, we see two distinct years stand out. As this is an approximation for total citizens affected, it makes sense that the two stand out years are 2005, the year of Hurricane Katrina, and 2020, as COVID-19 spreads far and wide throughout the country. 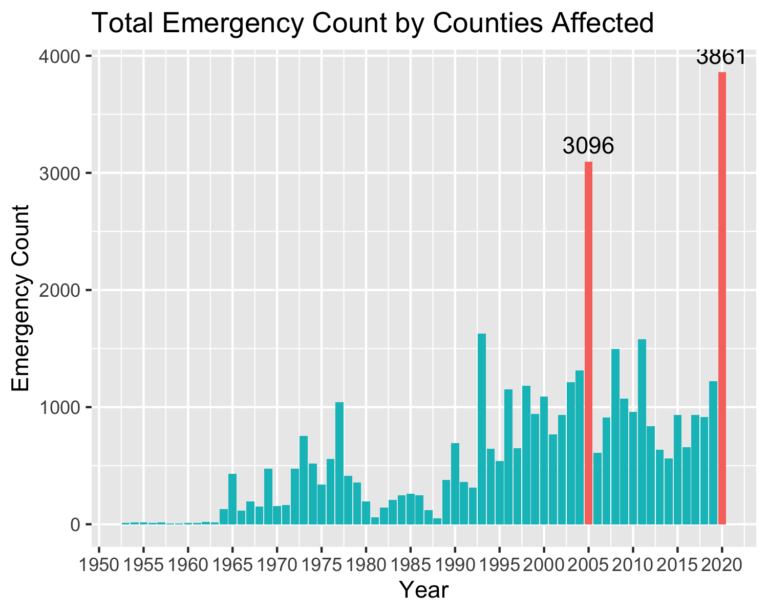 Additional analysis exploring population count rather than FEMA ID counts will be added to further identify the weight of each emergency declared by citizens affected. This optimistically will balance the fact that Texas may possibly be more likely to experience emergencies due to its sheer size; yet, the effects of a disaster may affect far fewer citizens, due to a smaller population density in certain parts, than if the same disaster were to occur in another state.

For Texas, 1996 was a year of one fire after another. First in February, a particularly large grass fire burned out of control, devastating not acres but miles of farms, homes, and land. Another particularly bad fire, Texas' Little Cypress Fire, was contained by April, however many other fires continued to ignite. The state continued to burn into the hottest months of summer leading President George Bush to declare a federal disaster in the state.

2011 broke many records, including the most destructive fire in Texas' history, the Bastrop County Complex fire. In total, Texas comprised 47% of all acreage burned in the United States in 2011 [2].

COVID-19 as one may have suspected has overtaken nearly all of 2020's registered emergencies. 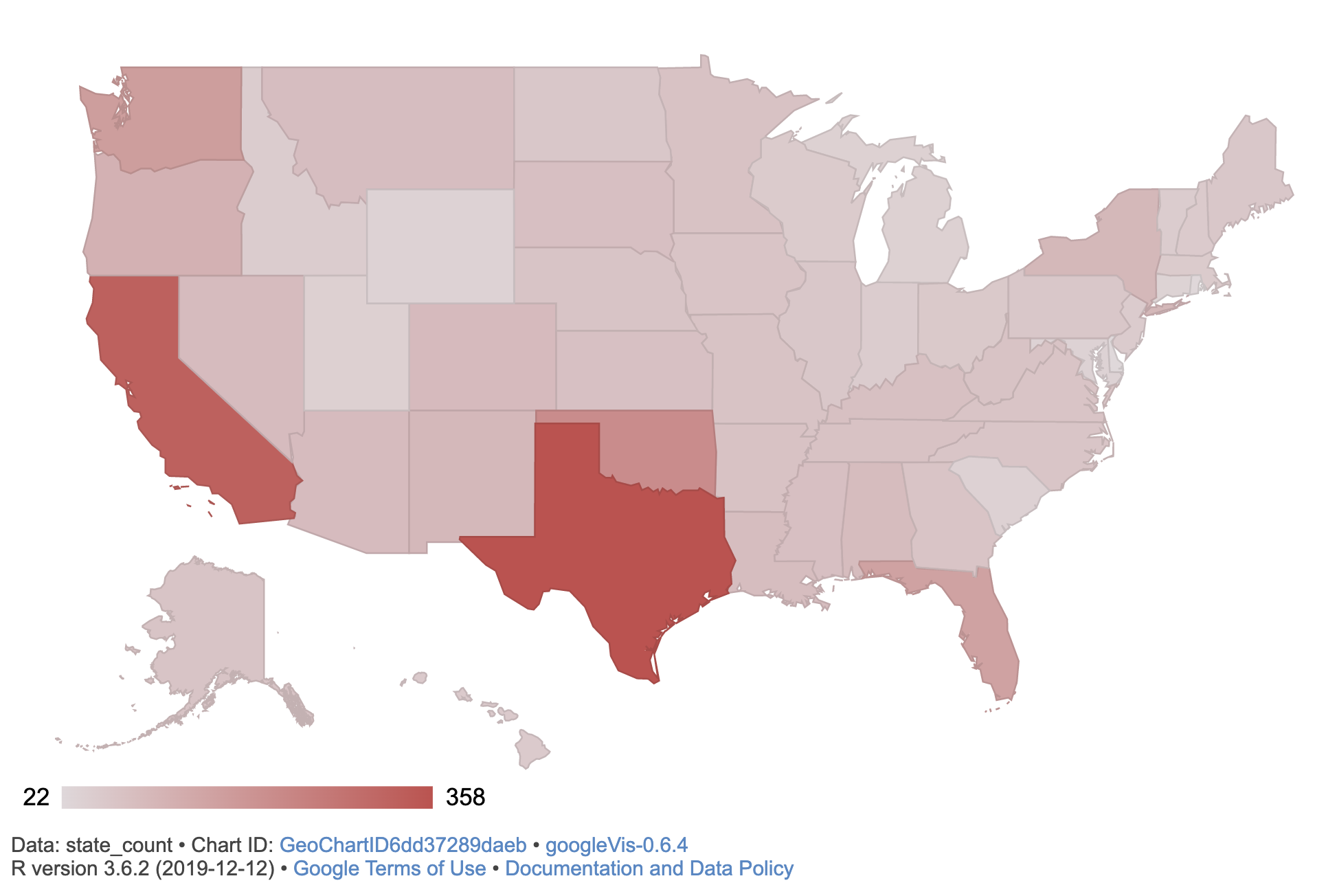 When we examine total emergency counts by state, it might not be too shocking to see Texas takes the lead, with a total of 358 emergency declarations since 1953. Trailing only a few counts behind is California with 323 total emergencies. California is known for struggling with hot weather, dry seasons, and high winds: the perfect recipe for forest fires. While Texas had a few outbreaks of extreme fire disaster, California continually experiences small numbers of fires, collecting up over the years. 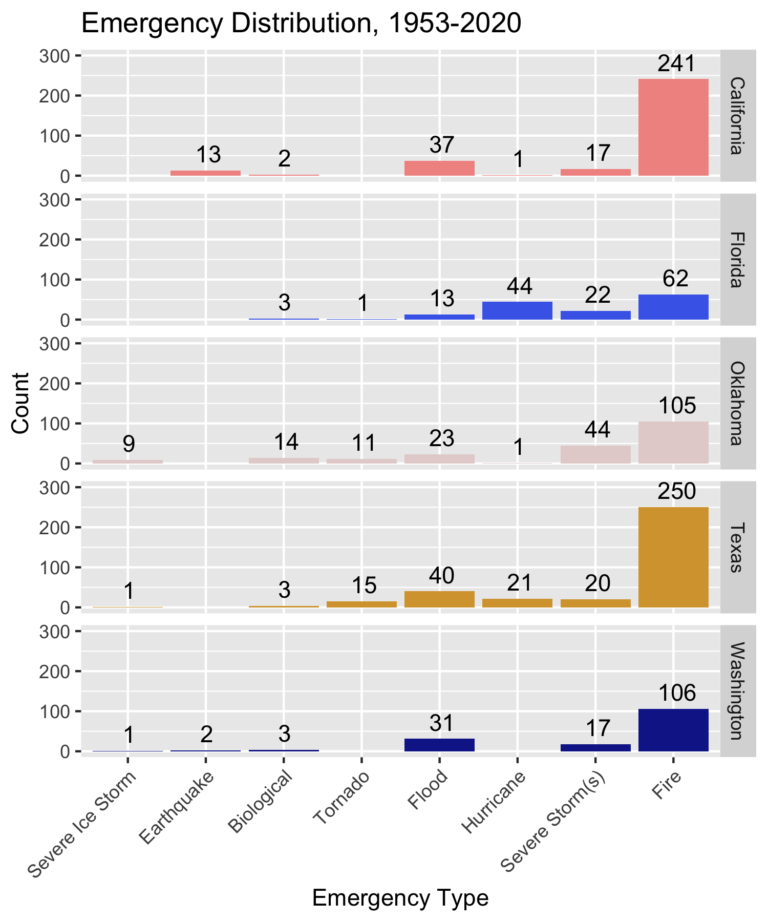 The next two states, Oklahoma and Washington, might come as a surprise in the list before the hurricane-prone state of Florida. Texas' neighbor, Oklahoma also struggles with a high fire emergency count, but surprisingly Washington has a dry season, too, that often instigates forest fires. Washington has struggled in the past few years with fires so greatly that as of 2019 the state has proposed a 'groundbreaking strategic plan' to build up the state's fire prevention team, in addition to strengthening its current firefighter and response teams. [3]

How Has Disaster Recognition Progressed?

Knowing more and more emergencies are being declared, it becomes an important question as to whether federal recognition times have held steadfast, or even decreased, in response to the growing need for aid. The short answer: they have unfortunately increased. The long answer: not all emergencies are the same, and not all filing processes stay the same. As the agency matures, the requirements from local governments may also mature and processes might lengthen to prevent abuse of power. 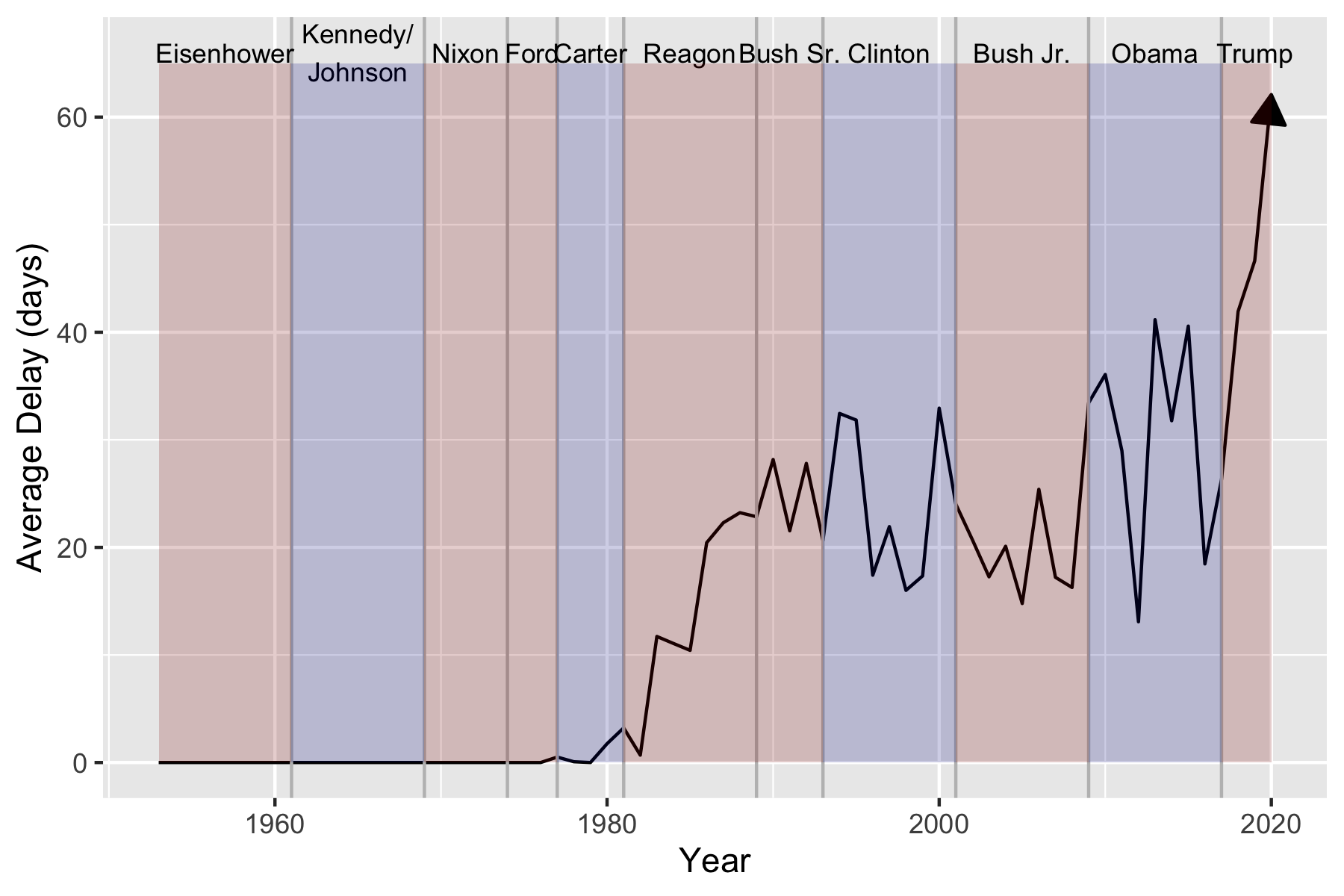 Additionally, emergency declarations can only be approved by the President. The graph to the above looks into how the difference in recognition time has been affected dependent on the President in office. delaying the release of federal aid and funds for safe-guarding citizens in disaster zones.

Further research would compare certain presidents' and their speed at declaring emergencies during their term, in addition to the unique emergencies faced by President. President Trump's 2020 average has launched higher than any previous President, but is handling a pandemic comparable to President Obama's response to Hurricane Sandy, or President Bush's response to 9/11 or Hurricane Katrina?

HOW FEMA IS IMPROVING

After Hurricane Sandy in 2012, President Obama signed the Sandy Recovery Improvement Act of 2013, declaring that federally recognized tribal governments have the option to request aid directly from the President. Previously, tribes experiencing hardship had to petition the Governor of the state to formally request the President to declare an emergency. And sometimes it wasn't only one Governor requesting or denying tribes aid. For every state the tribe's land falls under, a formal petition was required for each state's Governor.

From both looking at the distribution through the years as well as across the states, the data suggests that fire emergencies are the country's weakest area. Fire emergencies have been increasing since the start of FEMA's documentation, and many states are susceptible to emergencies due to fires. And secondly, Texas seems to be a, pun intended, hot-spot for emergencies, particularly fires.

Though, because there are so many different disaster categories and some are misleadingly labeled, a correlation plot can be difficult to construct and most likely unreliable. For example September 11, 2001 is categorized not as a terrorist incident but as an incident of fire in New York, unlike Virginia who filed the attack on the Pentagon as an incident of terrorism. FEMA depends on each individual governor's office to describe and categorize disasters when filing for emergency relief, leading to incongruences in the data.

The next step for this project is to look at smaller instances, not only the tragedies but also every milder observation for each emergency category. This would include smaller quakes and smaller storms; even though they may pass through causing little to no damage, having these intermediary points could paint a more defined picture than only looking at large disasters. In addition, a correlation plot could become much stronger in exposing relationships between certain emergencies.

After increasing the breadth of emergency observation data, I would also like to add population count and density to identify priority areas to protect. As the state-by-state case count saw, Alaska accounts for more than 17% of total land area in the U.S. yet makes up only 1.7% of emergency declarations. Including population count would help guide the focus on where to increase preventative measures first.

And finally, I aim to add the average monetary cost. FEMA is funded directly by tax-payer money, so to focus in on high-cost emergencies would both eliminate damage costs for citizens but also free up tax-payer money for other programs.

Victoria is a recent graduate of NYC Data Science Academy where she studied dashboard creation, machine learning, and statistical analysis. Her background of three years in the television and commercial industry allowed her to hone her organization and...
View all posts by Victoria Lowery >