Retailers: Here's What Your Employees Are Saying About You - A Project on Web Scraping Indeed.com

This is the second of four projects for the NYC Data Science Academy. In this project, students are required to collect their datasets using a method called webscraping. Essentially, webscraping is the process of collecting information (i.e. texts) from a series of websites into structured databases such as .csv files. Webscraping enables analyses to be done on data that is not already provided in a structured format. 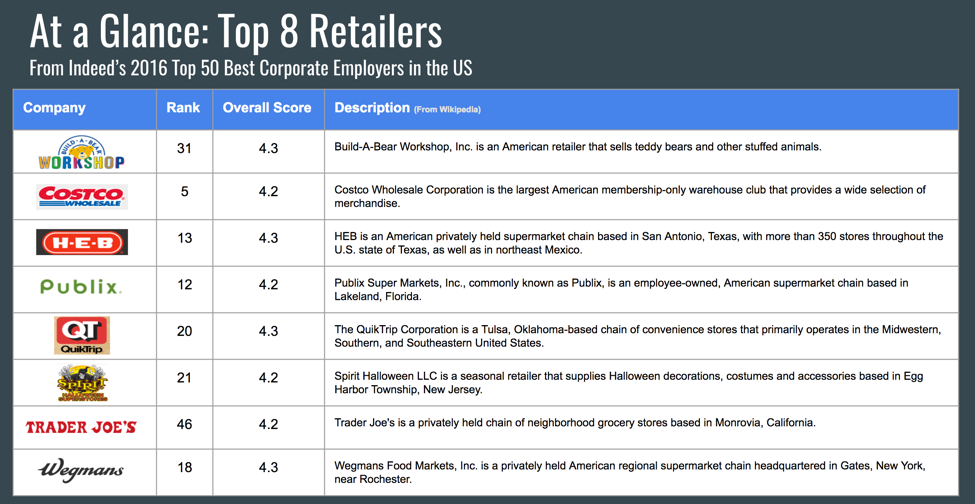 Given a two-week timeframe, the scope of the analysis was limited to these three primary objectives:

Scrapy (a Python framework) was used for collecting employee reviews for each of the retailers on the 50 Best Corporate Employers List. Each review scraped contains the following elements:

As seen in the illustration below, not every review contains a pro and a con, as those are optional fields for the reviewer. To see an example of a real review, you can visit Indeed's Walt Disney Parks and Resorts review page here. 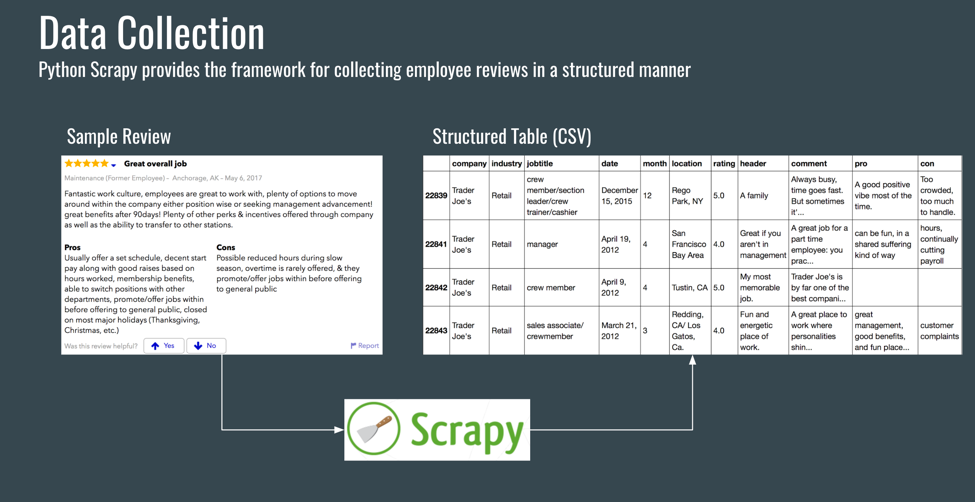 Employee Reviews At a Glance

In total, we have scraped over 20,000 reviews. The number of reviews scraped for each firm varies significantly across the board. This is likely due to the difference in the number of employees hired by each firm across the nation. 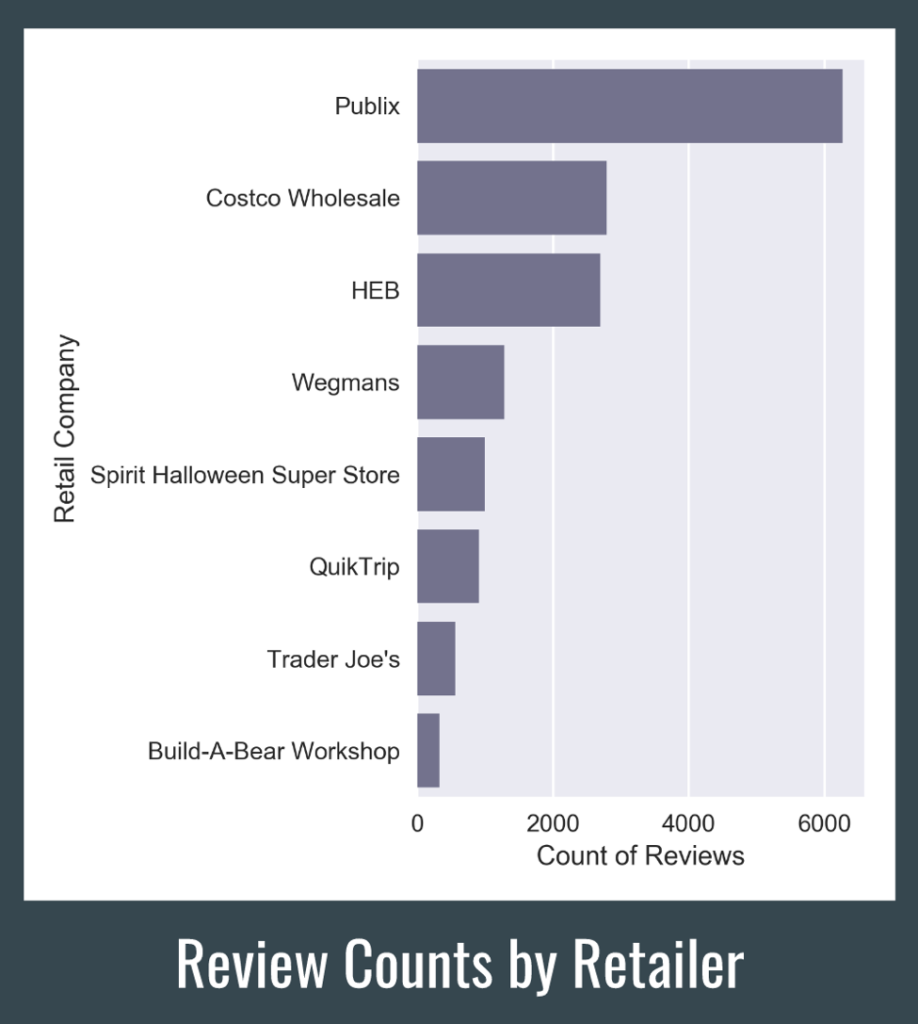 Employee reviews for these eight retail firms tend to peak around the beginning of the year (January through April). This is expected as we know that retail is a cyclical industry in which the majority of sales happen during the holiday season (November through January). Because employees are oftentimes hired only for the duration of this period, it makes sense  that the majority of the reviews come in around the beginning of the year. 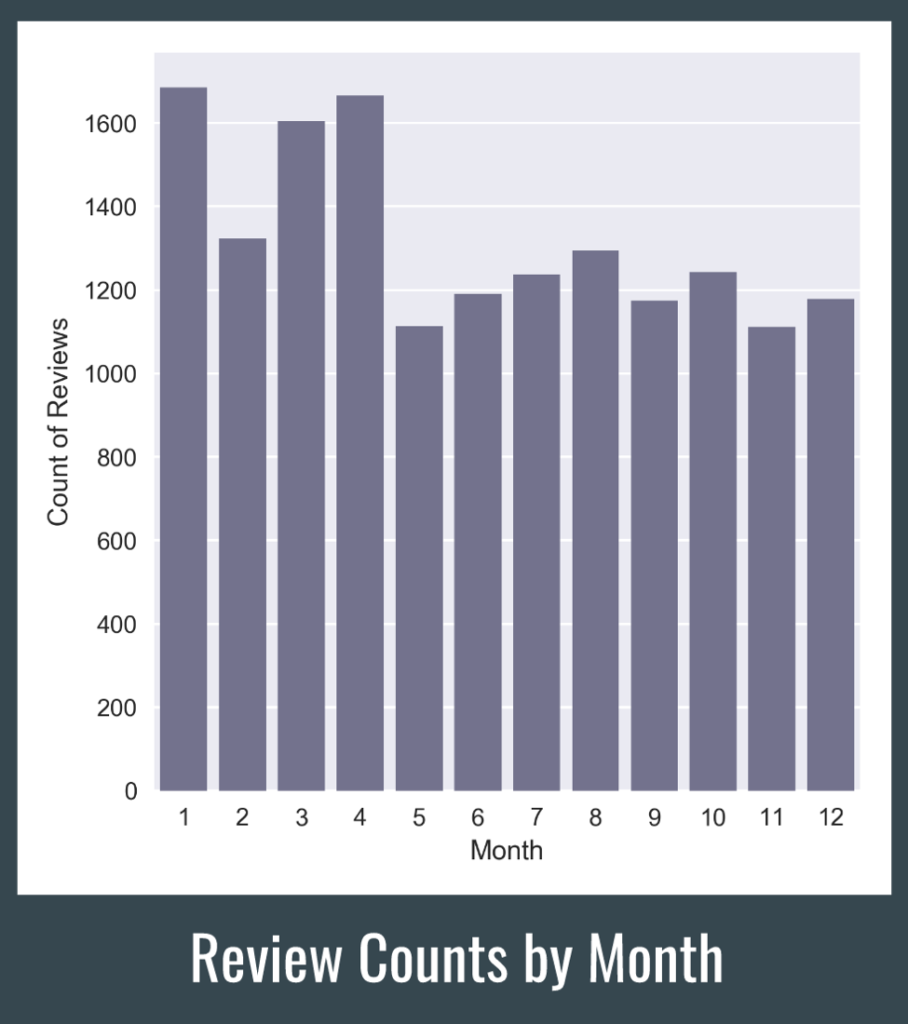 Among the eight retailers on the 50 Best Corporate Employers list, we see that the review ratings skew toward a score of 5, which is the highest score a review can get. 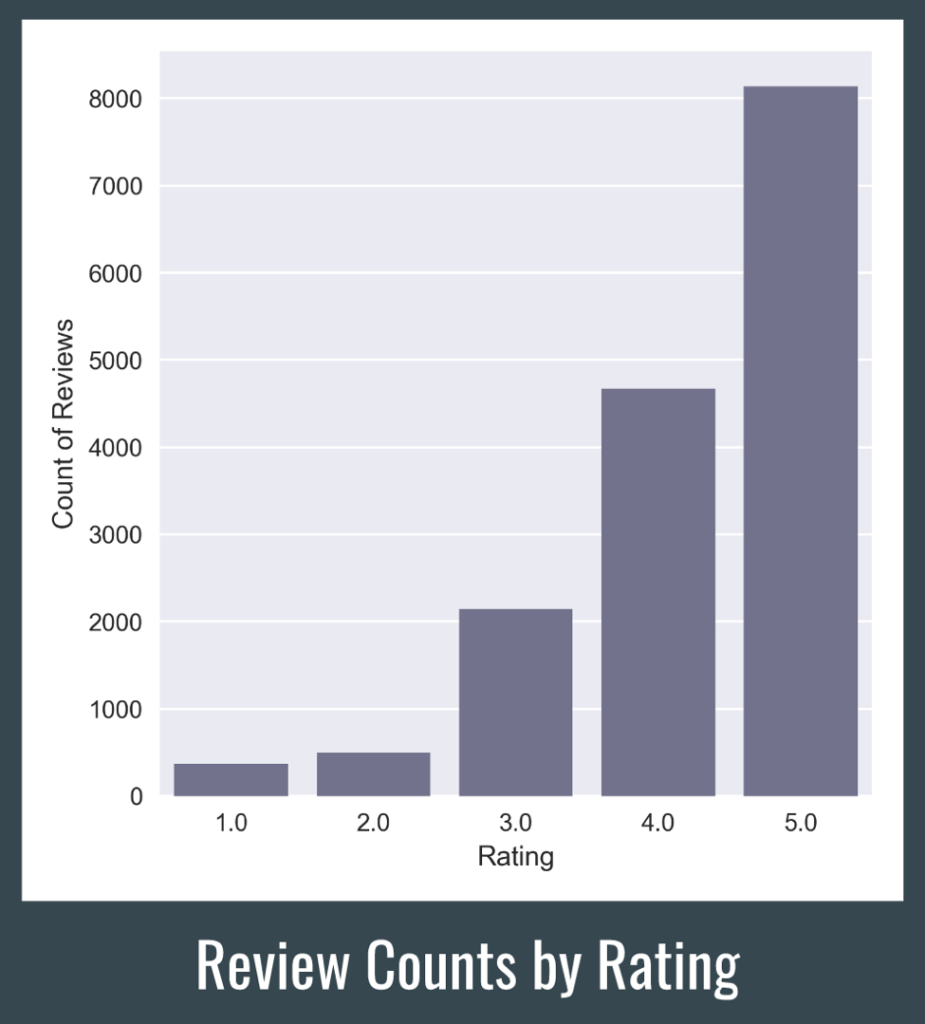 There is no significant differences in average rating across retailers. 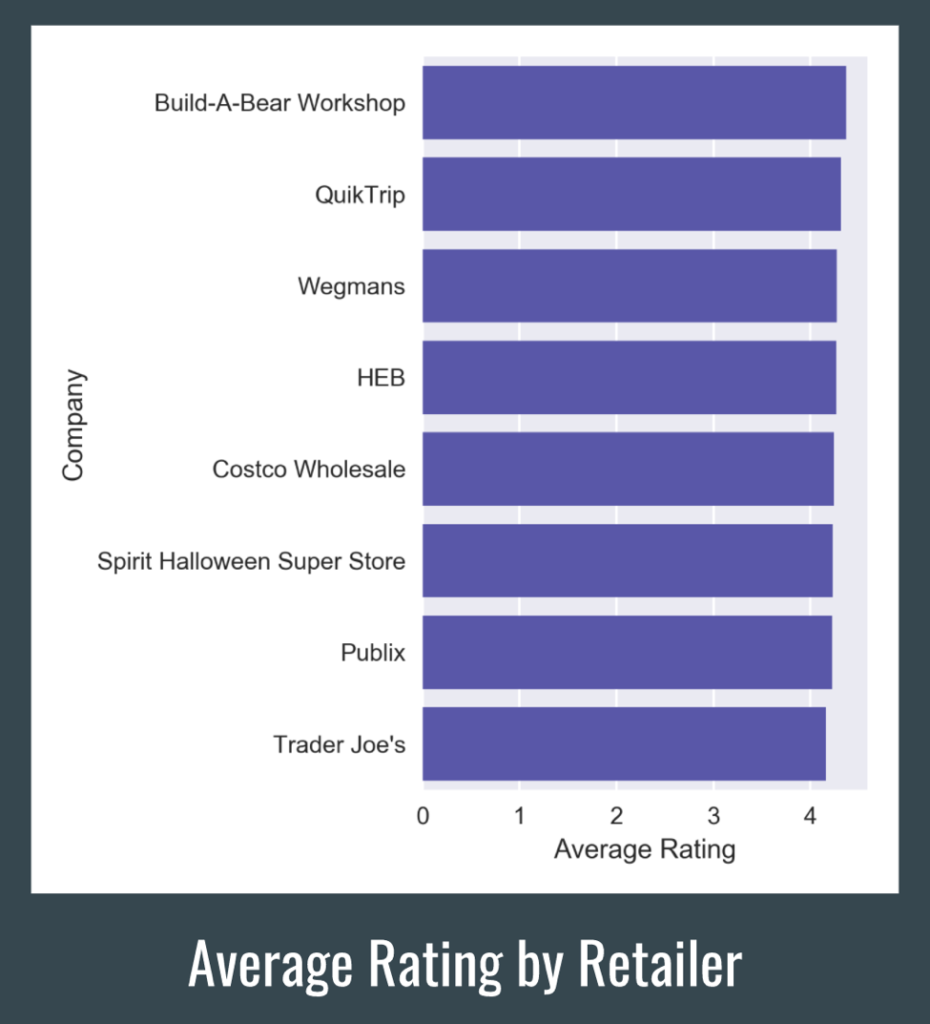 There is no significant differences in average rating across months. 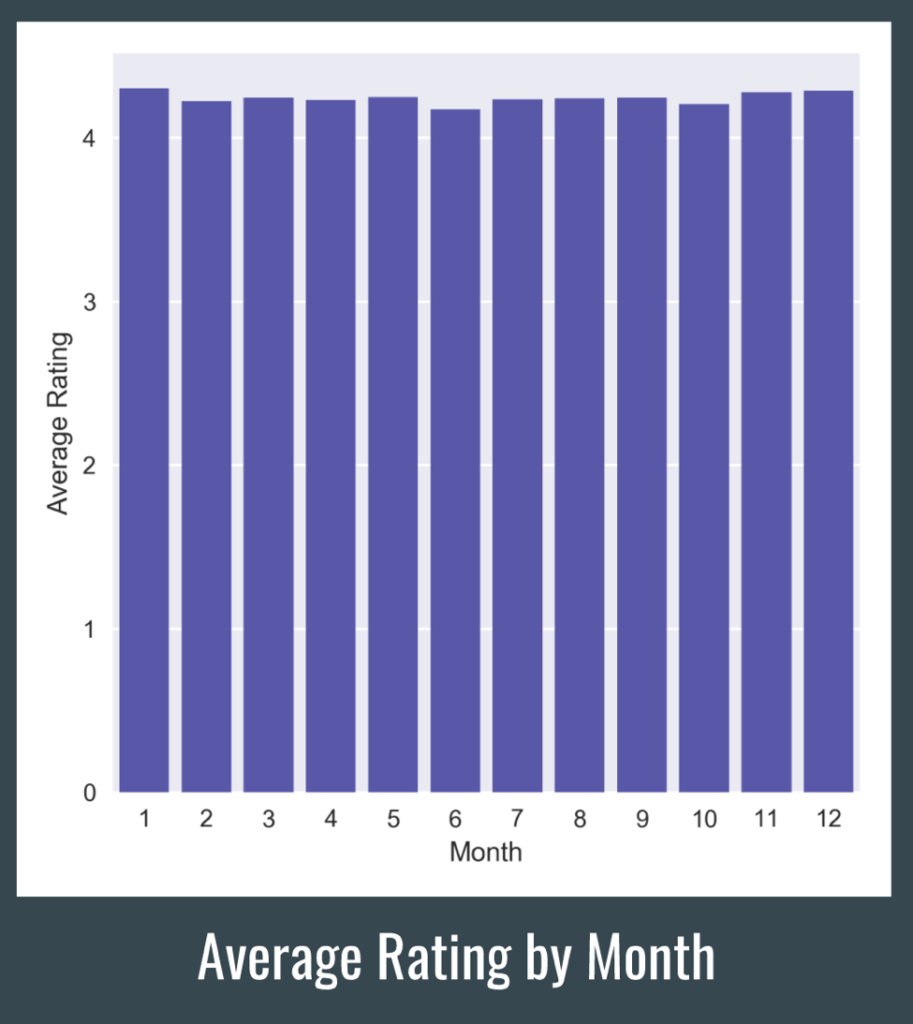 When Are Employees At Retail Firms More Likely to Submit Positive and Negative Reviews?

When we consider reviews of all ratings (i.e. reviews with ratings 1 to 5), retailers receive the highest average ratings during the months of October, November, December, and January. Note that the ratings have been scaled to 0 to 1 to allow for comparison across firms and months. 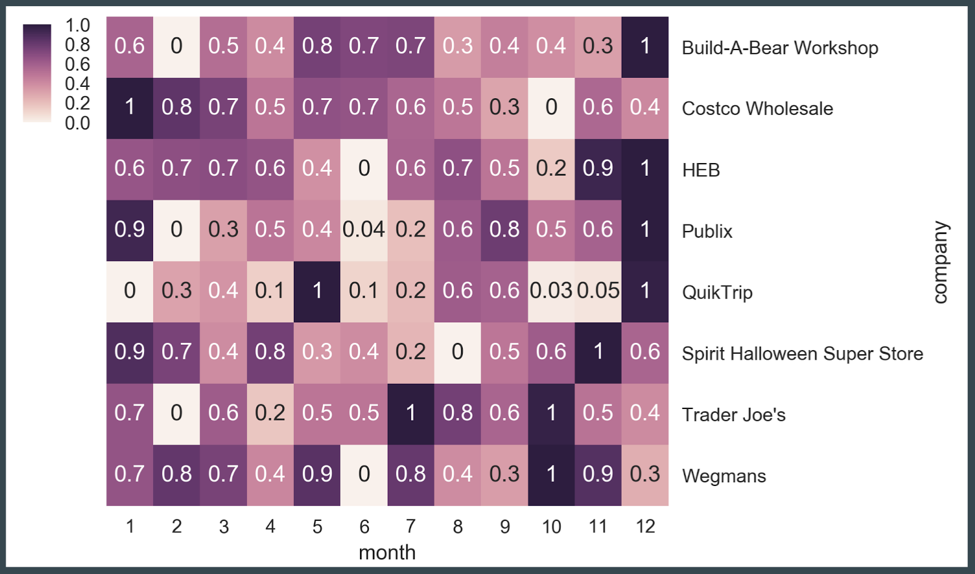 Most Negative Reviews By Month (Reviews with Ratings Below 3)

If we only consider the count of negative reviews (i.e. reviews with ratings 1 or 2), retailers on average receive the most negative reviews during the months of October, February, March, and April (i.e. these months scored higher across retailers). 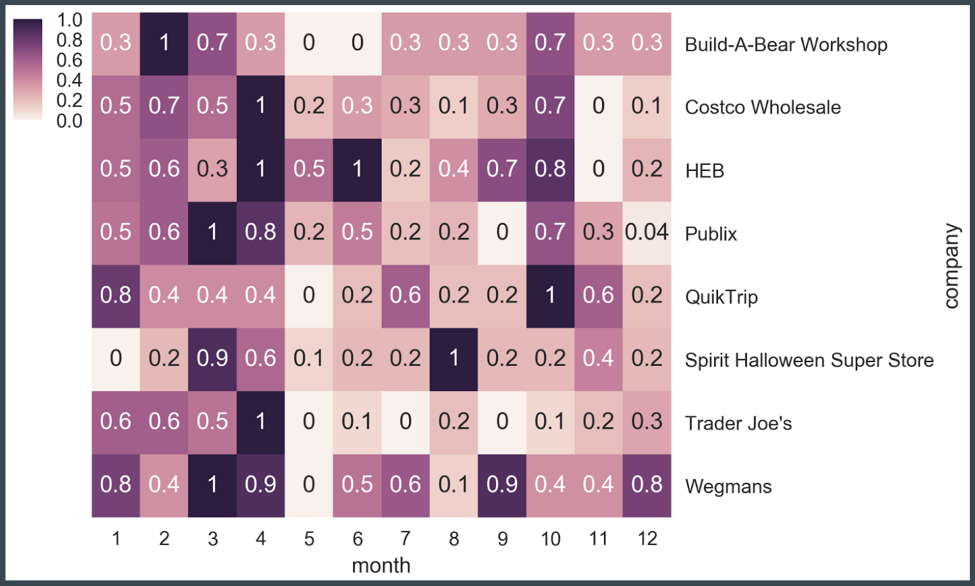 Most Positive Reviews By Month (Reviews with Ratings Above 3)

If we only consider the count of positive reviews (i.e. reviews with ratings 4 or 5), retailers on average receive the most positive reviews during the months of January, February, and April (i.e. these months scored higher across retailers). 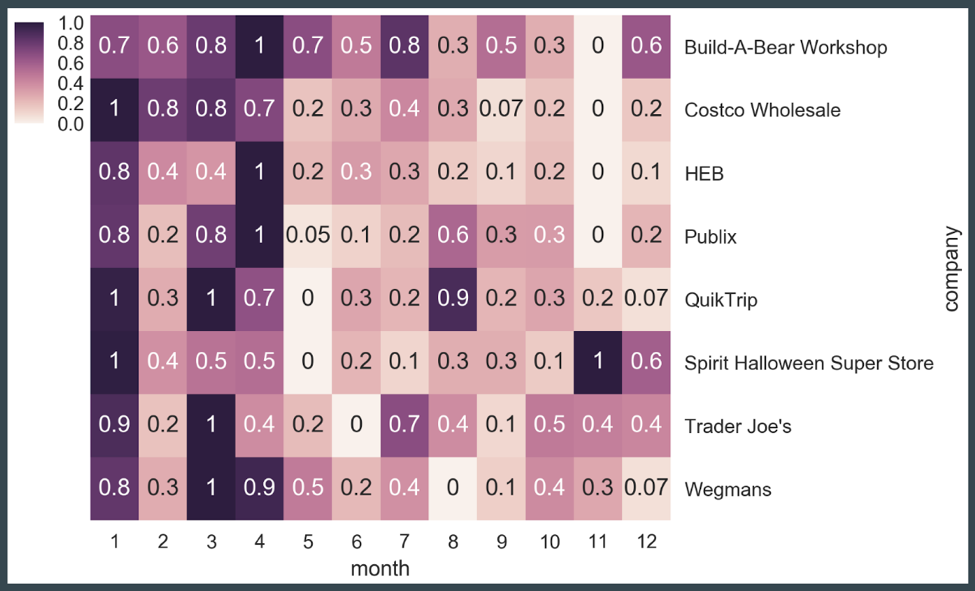 In summary, while the highest average ratings concentrate toward the end of the year, the highest count of both positive and negative reviews are given during the beginning of the year. This aligns with our understanding that the retail industry is cyclical. In other words, employees are oftentimes hired specifically to aid sales around the holiday season (i.e. Nov to Jan). When their work concludes around the beginning of the year, that's when we can expect employees to write the majority of the reviews (i.e. both positive and negative).

A sentiment analysis was done using R's Syuzhet library to visualize the emotions across employee reviews. In the illustration below, each graph represents the intensity of the an emotion from January to December on a positive scale (i.e. 0 and above). For example, for Build-A-Bear Workshop's 'positive' graph, we can see that there is an uptick in positive sentiment toward March and November, and each of those months scored approximately a 6. This is a high score relative to the scores recorded across all other emotions.

Generally, the sentiment observed align with our understanding that the majority of the employee reviews are positive, as we are narrowly focused on analyzing employee reviews among the best 8 corporate retail employers according to Indeed's ranking. As an aside, it is interesting to see that Build-A-Bear Workshop and Trader Joe's recorded more volatility in its scoring across the negative emotions (i.e. negative, sadness, fear, disgust, anger). 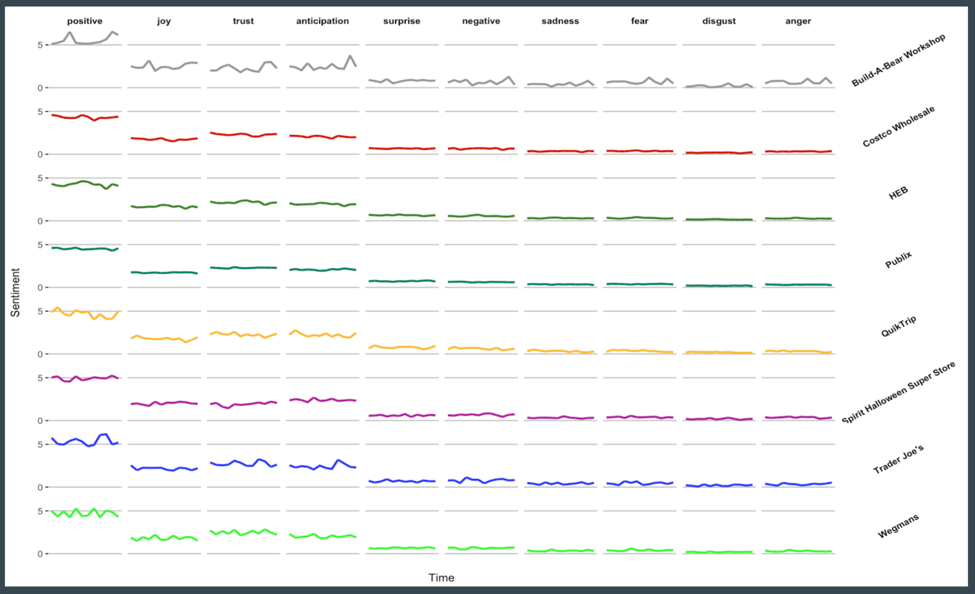 Topic modeling is a form of unsupervised machine learning, and it can help us identify patterns by clustering similar items into groups. In this analysis, pyLDAvis, a Python library, was used to analyze the groups among positive and negative reviews (using pros and cons of the employee reviews). Essentially, the library takes a list of documents as inputs (i.e. a list of reviews) and attempts to group the reviews based on common combinations of keywords appearing in each of these reviews.

The drawback of using topic modeling, as with other clustering techniques, is that the user has to specify the number of groups to cluster the documents into. This presents a catch-22 issue as the initial objective is to understand the number of topics or groups among your inputs. Given this hurdle, the user must use their business judgment as well as running multiple trials with different number of topics as inputs to determine results that are most interpretable. More sophisticated clustering libraries aid the users by automatically selecting the best number of topics, but this should only be used as a guide to begin the analysis.

In the illustration below, we can see that words like 'great' and 'benefit,' among many other words, are oftentimes seen together among pro reviews. 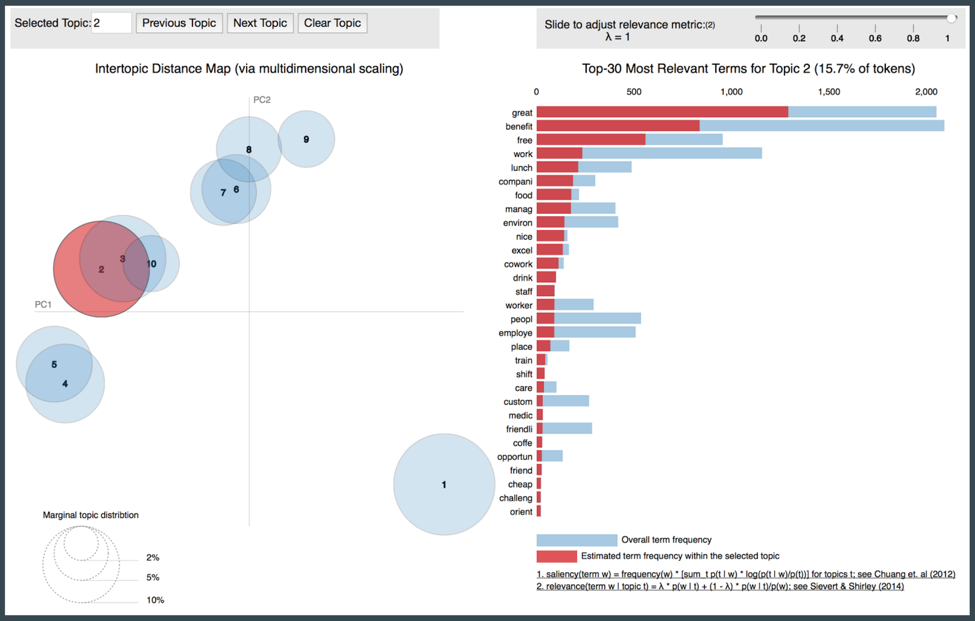 Observed Topics Among Pros and Cons in Employee Reviews

Two topic modeling analyses were conducted using pro reviews and con reviews. Below are the most common combinations of words appearing in each of the groups for each analysis. It is not a surprise that the groups overlap in the common words identified among them, as we have chosen a relatively high number of topics. Nevertheless, the results provide a useful start for understanding what employees are thinking. 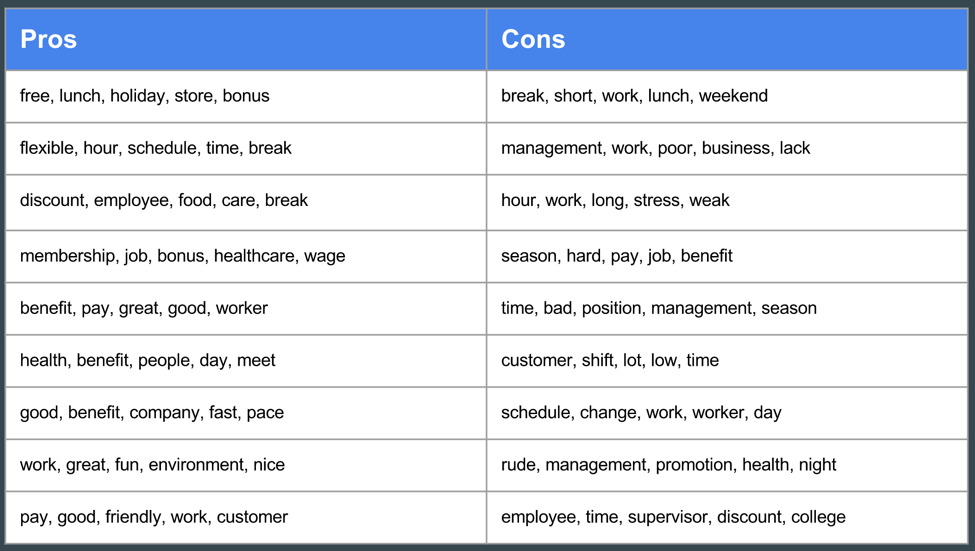 R's Wordcloud2 library was used to further aid the visualization of what employees are saying about these firms. Essentially, the library takes a list of words along with their frequencies, and produces a word cloud based on those inputs. The higher the frequency a word is associated with, the larger it appears in the word cloud.

The positive reviews word cloud was created using only the pros from each of the reviews. (Note: Each review contains the main review, a pro, and a con.) Some of the common words we see among pros are 'great,''work,' 'job,’'company,' and 'customers.'

Similarly, a word cloud was created using only the cons from each of the reviews. We can see that common words appearing include work, management, hours, employees, and pay.

Beyond the scope of this project, below are other interesting areas that are worth looking into if additional time allows.