Contributed by Arda Kosar. He  is currently in the NYC Data Science Academy 12 week full time Data Science Bootcamp program taking place between April 11th to July 1st, 2016. This post is based on his third class project - Web scraping (due on the 6th week of the program).

The main motivation when I came up with the idea of scraping a job board is that, I will start working as a data scientist after the bootcamp and I wanted to see how the job posts look like regarding my field. What are the trends, what are the main skills companies look for etc.

My first plan was scraping Indeed.com however I came across some difficulties which I will address throughout this post. After trying to over come the difficulties for three days - since this is a timed project, the allowed time limit was around 1 week and I really wanted to create an output - I decided to change the website to dice.com. I will also talk about what worked better for me with dice.com.

At the end of the project I was able to collect the data I want from dice.com and I got some insights which I will share in the Analysis part.

For the collection of my data I used scrapy and selenium. For indeed.com I had some difficulties regarding the html structure. I was trying to scrape job posts however I figured out that there were 4 different kinds of jobs and they were all under different tags in the page. An example from a page and the 4 types of jobs can be seen in the image below: 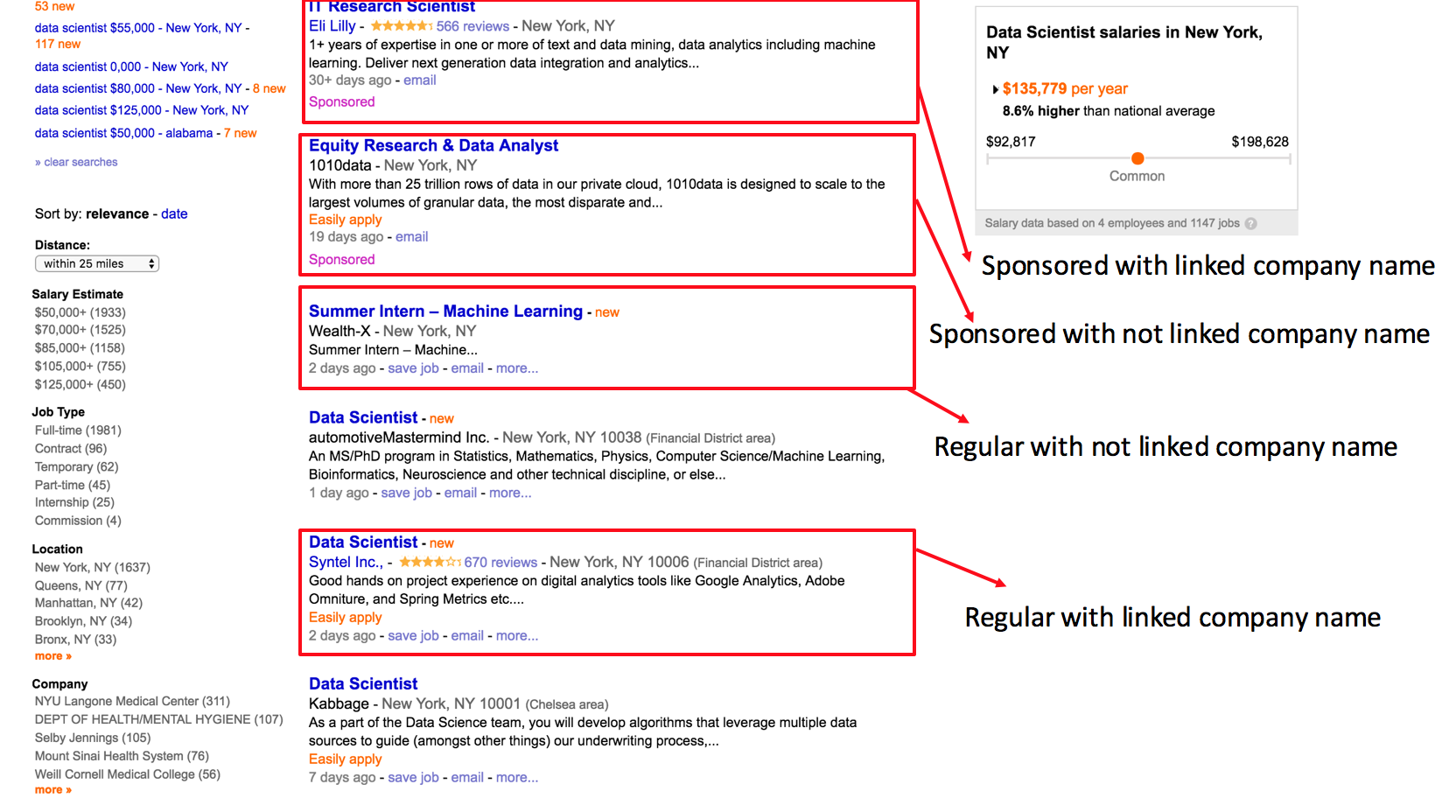 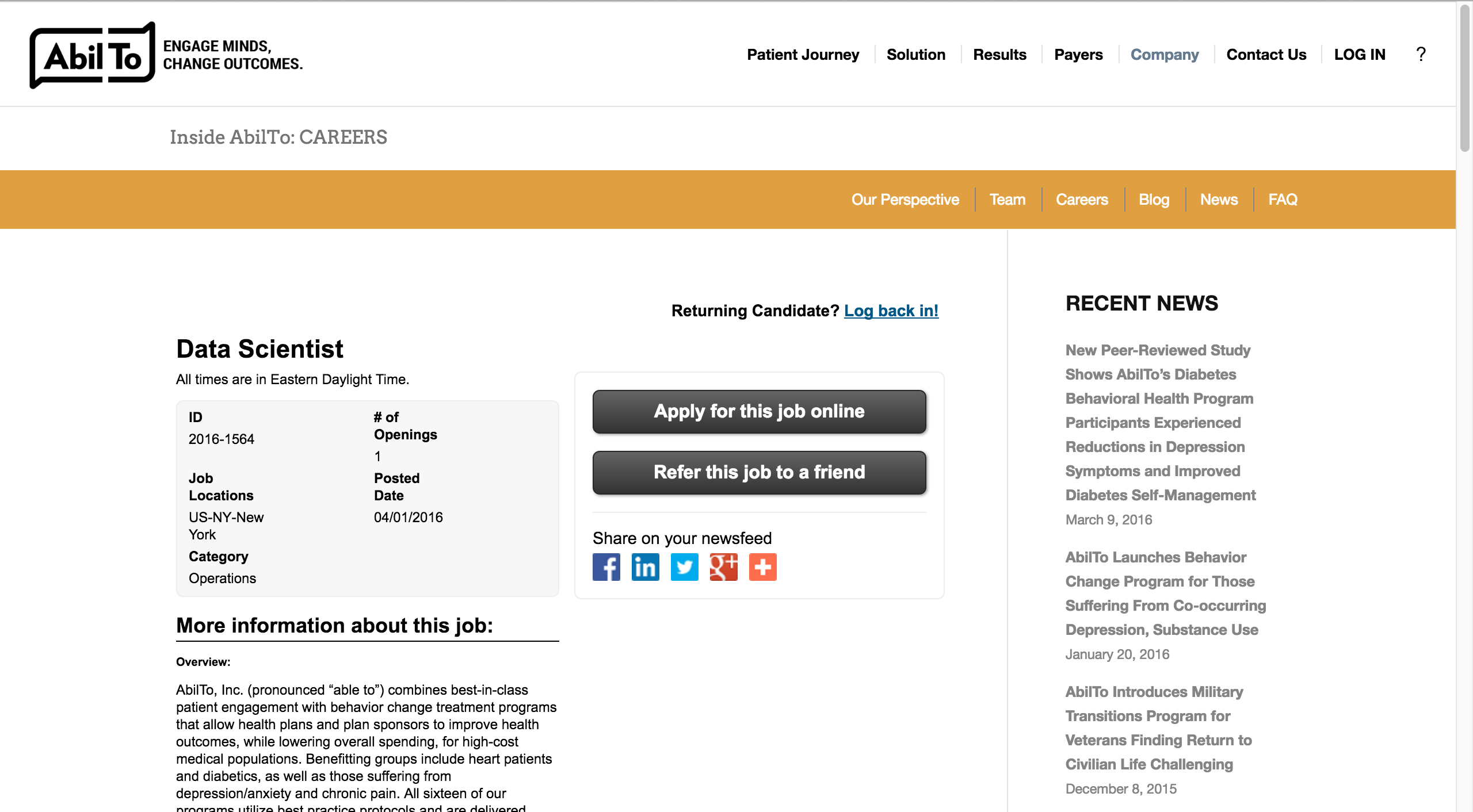 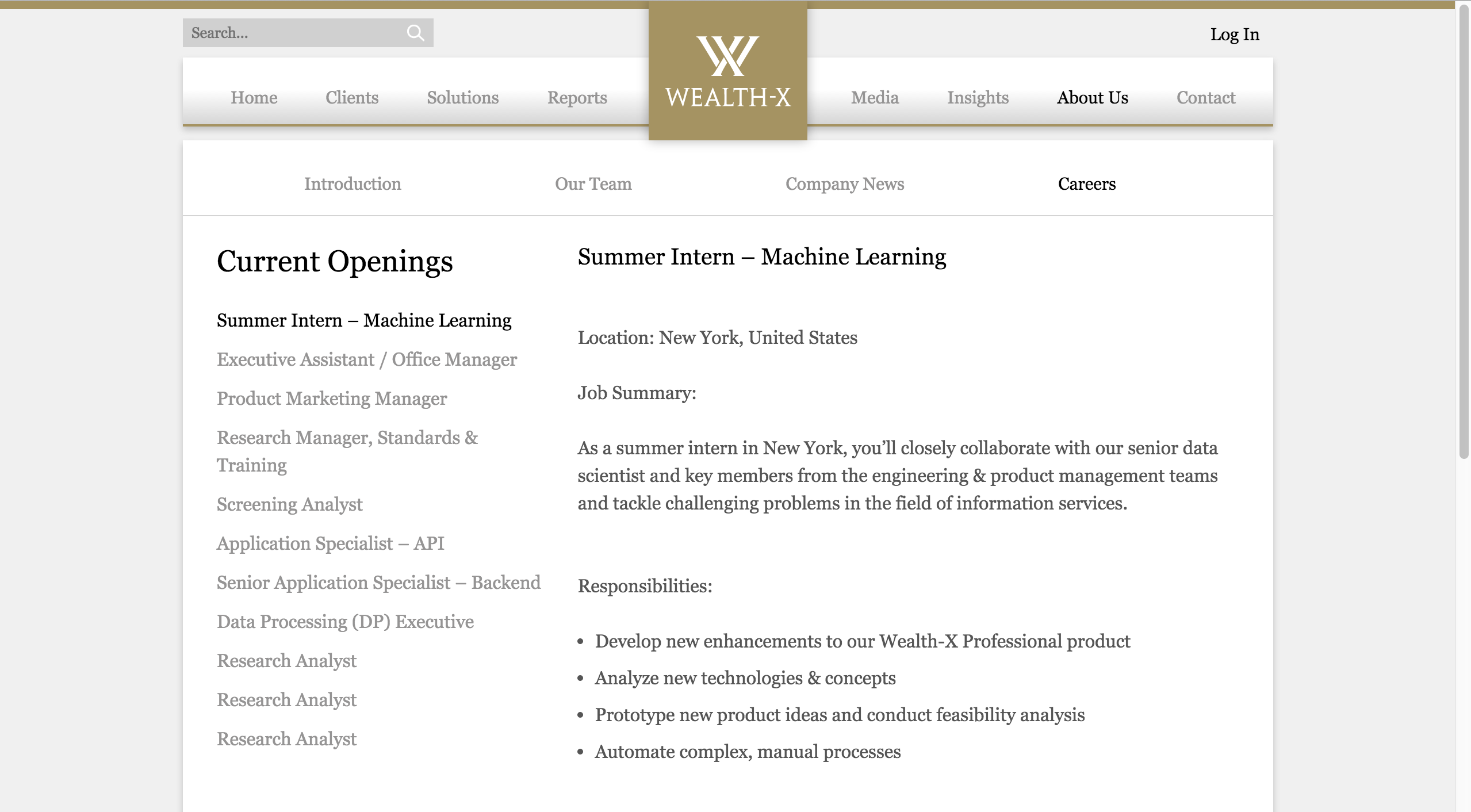 After considering all these I decided to change my website to dice.com, after taking a look to its html structure. In the search results page all jobs were the same type: 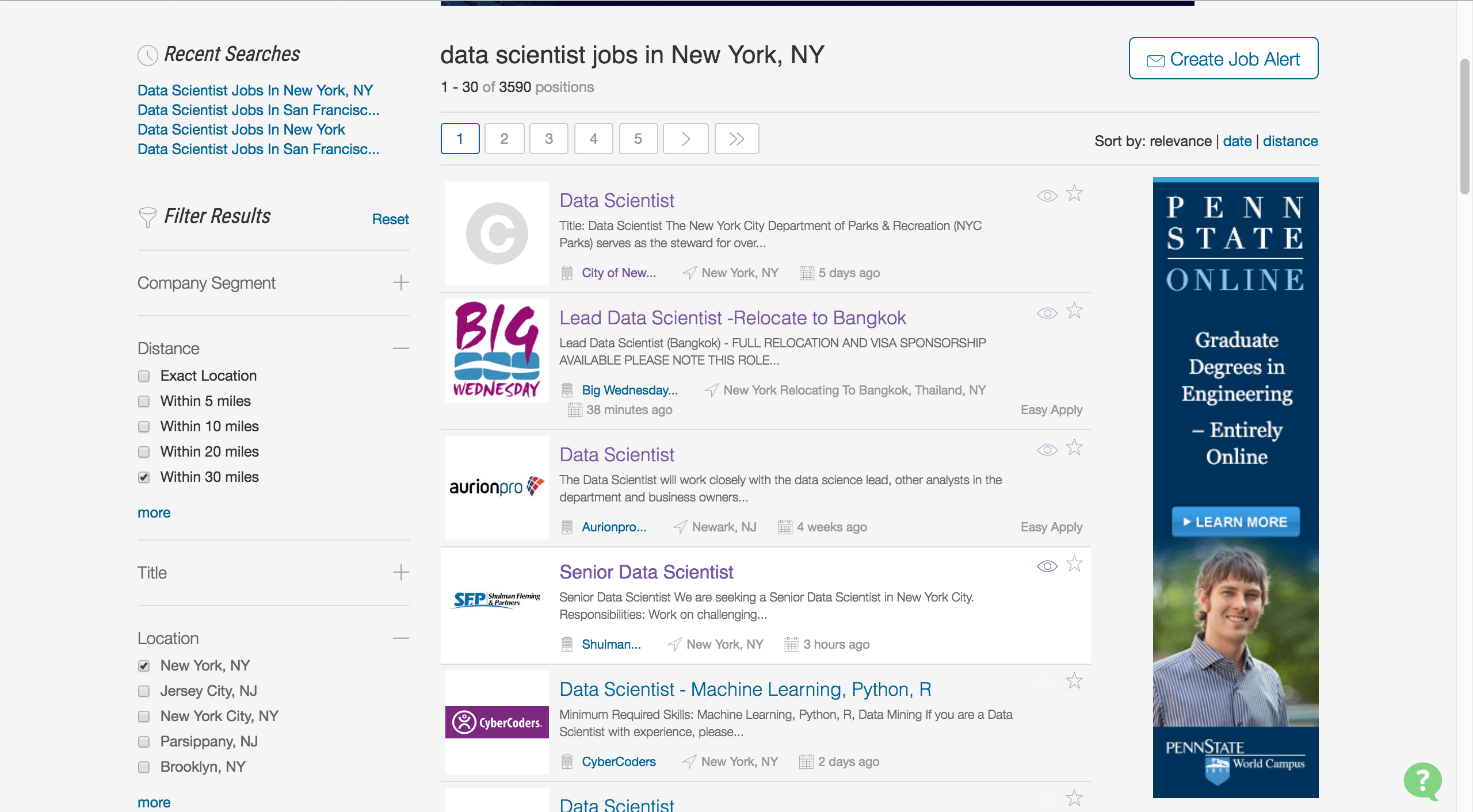 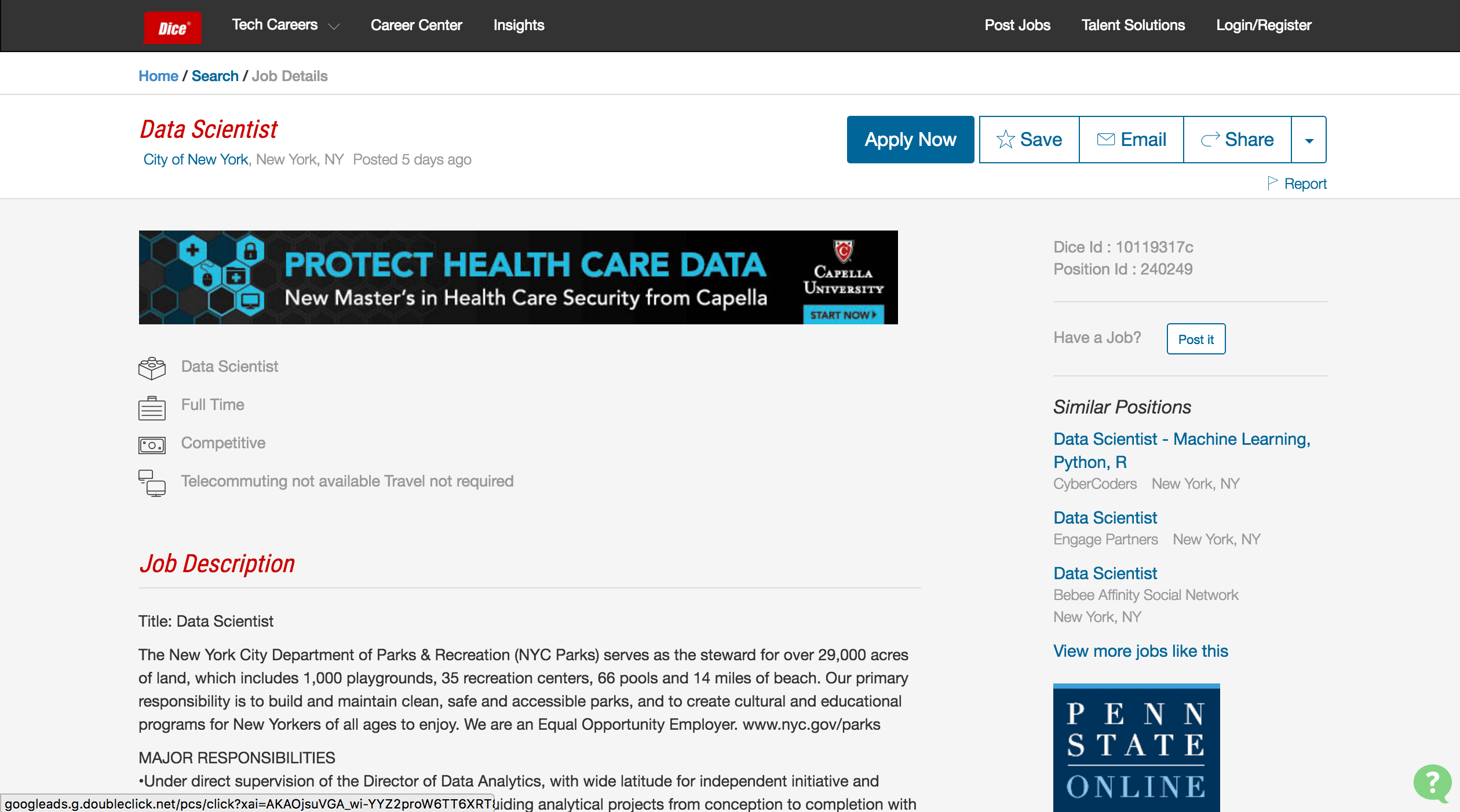 First I created a for loop for collecting all the links to the separate job posts from the search results page:

After the collection of all the links to the jobs posts, I got into the links and extracted the information I want, by creating the response of the page and iterating over the xpaths for the fields I want:

I wrote the extracted information to a csv file by running "scrapy crawl -o file.csv -t csv" from the terminal.

At the end of the all scraping work flow, I obtained the following dataset:

As it can be understood from the head of the dataset, the data contains a lot of noise. For the purposes of this project, I carried out my data munging process in Python, mainly by using Pandas, Numpy, Seaborn packages. I imported my csv file to Python and converted it to a Pandas data frame.

I calculated the frequency by dividing the value_counts by the length of my job_title vector. The bar graph that gives the frequencies of the unique job titles is as follows: 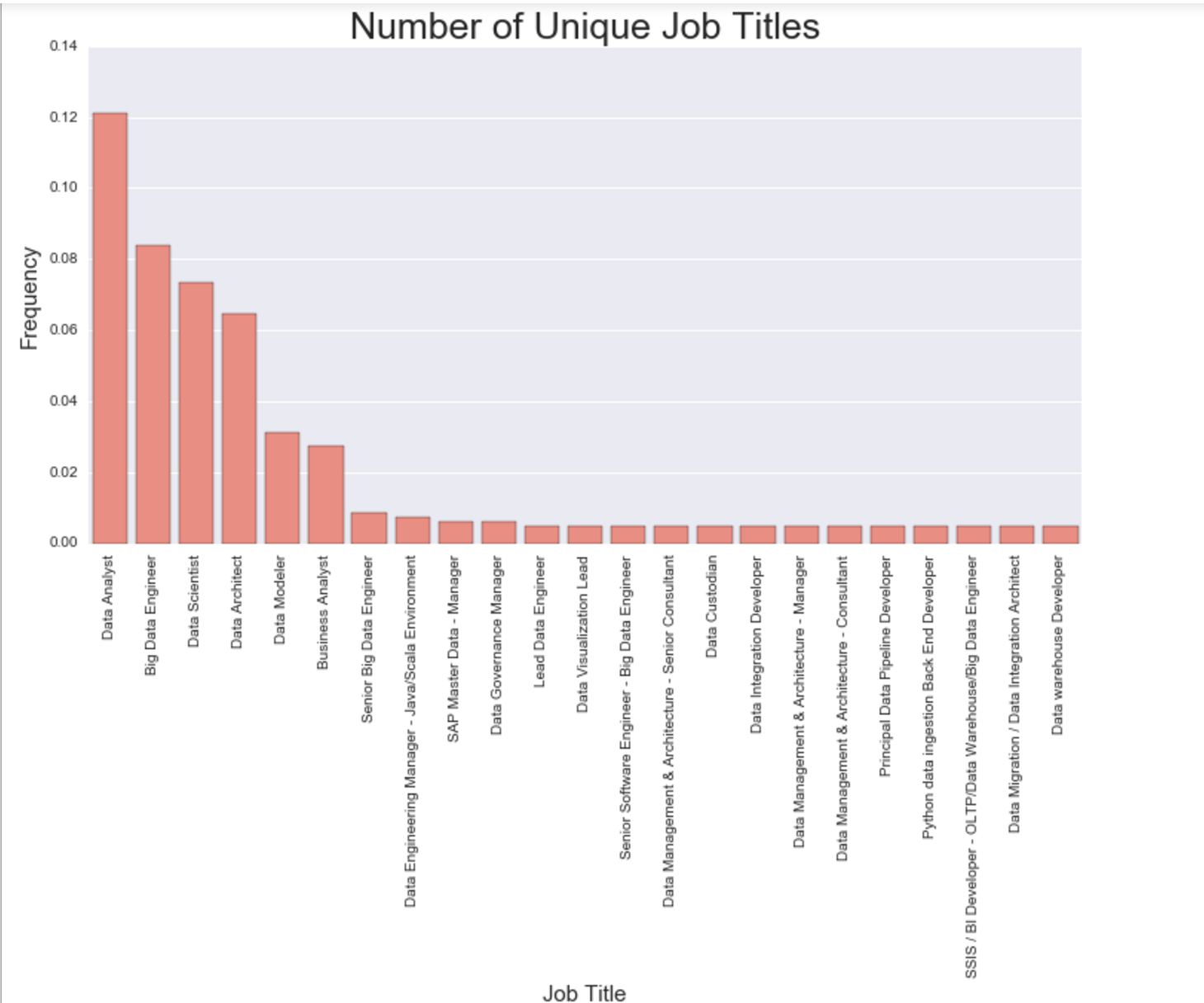 As can be seen from the graph "Data Analyst" is the most commonly included job title when "Data Scientist" is typed into the search box. Before plotting the graph I was expecting to see Data Scientist as the first title however there were more job posts which specifically includes "Data Analyst" and "Big Data Engineer".

After analyzing the data according to job titles, since I have the company name, I wanted to see the number of companies which posts for the most number of jobs: 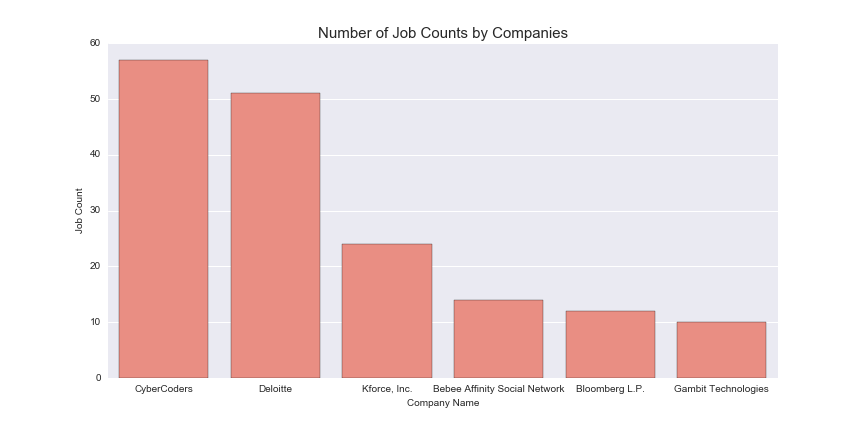 The company which has the highest number of job posts is CyberCoders, since it is a permanent placement recruiting firm. Deloitte has the second highest job post count which shows that the company places a high importance to this field of business. 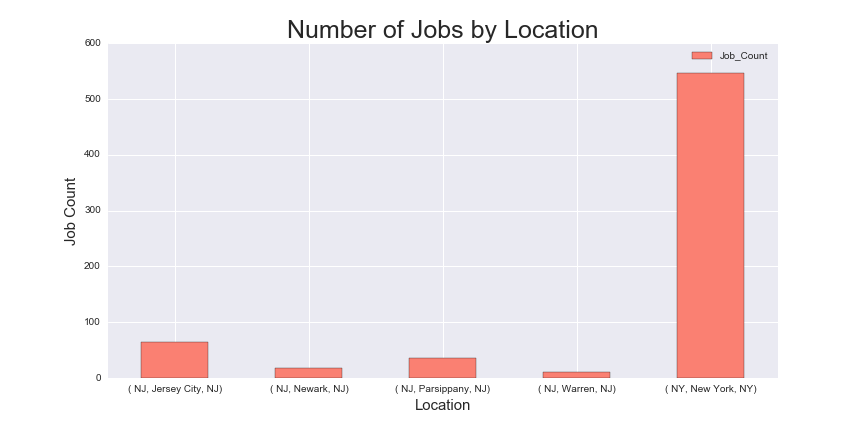 As a conclusion to web scraping project, it did not went the way I wanted. However I learned a lot from the experience in this project.

First of all the scraped data would have chosen in a more analyzed therefore after the scraping I would not end up with a dataset which included so much noise. Before the scraping flow I could have checked the fields I wanted to scrape and see that they do not include a pattern and they include a lot of noise which would make my job more difficult in producing output.

Secondly, I should have analyzed the web site more thoroughly before scraping. By this, I could find out that indeed would be difficult to scrape which would lead me to the path of choosing another website.