The Growth of Startups 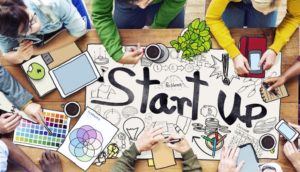 The Startup scene has seen dramatic change over the last decade. Barriers to entry have become increasingly lower as Investors are constantly looking for the next big opportunity. With billions of dollars being invested every year, small startups have turned into major players in today's global economy. It is important for both the investor and the entrepreneur to visualize the changes occurring in this market, so that way they can make the right decisions when it comes to investments, and capitalize on key trends and performers.

The data collected was from Crunchbase.com, which is a online resource for learning about companies and investments. The file I used contained information from Q1 of 2004 to Q1 of 2014, on over 630,000 investments. I was provided the name and location of both the company and the investor along with the funding type and amount of money in USD. From this information I hoped to gather the following details:

As expected, US has had a firm dominance over the rest of the countries in terms of volume, and size of investments. Silicon Valley rules the startup scene with some other major States including NY, Texas, and Massachusetts. However, through my research I realized investors soon started finding opportunities elsewhere. During the later half of these 10 years, there was a lot of new startups coming up in emerging markets such as Latin America Eastern Europe, and Africa. Even within the US, States with secondary cities such as Colorado and North Carolina started receiving major investments. The map below shows how spread out investments are located in 2013. With money spreading into new areas, new economies are booming which leads to more opportunities for both investors and ventures. 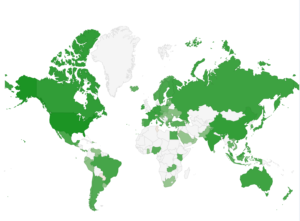 Fueling this global change are Angel Investors, Venture Capitalists and many other types of institutions. Usually angel investments are capital provided at the beginning stages of a company's growth, these are then followed by a rounds of series investments(A,B,C+), and then finally once a company has scaled large enough and has shown potential for high returns, Venture Capital and Private Equity groups will invest with usually very high amounts of capital funding

Angel Investments have consistently increased throughout the decade, with other forms of investment still trending upward but showing more signs of volatility. Since VC and PE firms are much larger, the amount of risk they take is more dependent on economic conditions and fiscal policies For example during the financial crash we saw slight decreases in overall spending.

When observing specific industries I started off with over 40 different industries. In order to visualize high performers, I narrowed down the categories to investments that have surpassed $5 Billion USD per year. In my finding there is no surprise that software has outperformed, many of the other categories. But surprisingly, Biotech has been a consistent high performer almost every year. I believe that this is due to the advancements in genetic research and changes in the Healthcare Industry (ex. ObamaCare).

We slowly start to see new industries come into the market and remain as valuable opportunities to invest. For example, E-Commerce and Enterprise came up in 2011 and stayed at high investment opportunities. I think that moving forward we can start to see uptrends in other categories such as Education and Analytics (shown below) and I believe those will break the $5 Billion barrier in the years to follow.

Overall, we have seen consistent growth in the industry, and I believe that more opportunities will continue to show up as the market expands into new countries and cities. Silicon valley will continue to be the center point of ideas but as emerging markets start to see more companies grow, investments will continue to increase in activity as investors will find huge potential in these ares. Finally, Software and Biotech will continue to be your safe bet for investment. However, other industries such as education, media, sports/games are starting to create new technology services which will soon raise their value. Right now, it is possible to find undervalued situations with lots of upside if the industry moves in the right direction.

View all posts by Vineet Luthra >