Internet forums or message boards are online discussion sites. They're used for a variety of purposes, including general socialization, asking specific questions, or sharing experiences.

Forums can be an abundant source of unstructured text data, often generated by specific communities united by shared interests. And analysis can be applied to these online discussions to uncover hidden patterns or to organize, summarize, and understand these communities -- both the members themselves and what they talk about.

In internet parlance, the participants are referred to as 'users', the conversations are called 'threads', and the unit of interaction is called a 'post'.

In this project, we use topic modeling to infer a structure or a set of common topics behind a collection of threads. Additionally, we try to group users to see if we can determine whether users fall into identifiable archetypes.

We used Python's Scrapy library to gather user-posts from www.veggieboards.com, an internet community for vegetarians and vegans. The final dataset consists of ~450,000 posts from Oct. 2001 to Oct. 2017. The posts are divided into ~22,000 threads and made by ~14,600 users. We stored the individual posts as Python dictionaries in a MongoDB database - an example can be seen below: 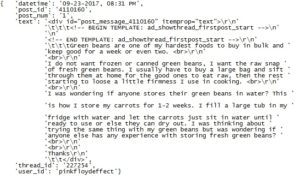 We followed the workflow set forth by Patrick Harrison who did Modern NLP in Python, relying heavily on the Python Spacy and Gensim libraries for natural language processing.

We can inspect the generated LDA models using the pyLDAvis library. The tool reduces the dimensionality of the model from K, the number of topics, down to 2D space for visualization purposes. The conceit being that topics that are more similar to each other are closer together and topics that are less similar are farther apart.

The topics generated by the LDA process aren't always human interpretable, and they aren't always easy for humans to distinguish between. Some topics are vague, and many topics share the same words. The clarity of division depends on the underlying documents themselves. Perhaps LDA may not be wholly appropriate for sub-forums, which are already narrowed down to specific categories. Even still, we were able to extract some promising topics. 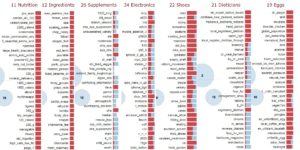 The modeling process is fairly labor intensive, because it's difficult to evaluate the models without human intervention, especially if the goal of the model is for human understanding.

For modeling on users, the results are much worse, perhaps because generally users participate in a variety of different topics, taking part in many different threads. A lot of the pre-processing that's helpful in topic modeling such as removing stopwords, stemming, and lemmatization may actually be counter-productive for user differentiation. Those processes remove stylistic information unique to users or user groups, thus a user-centric study may benefit from a different type of dictionary.

Paul is a software engineer by training. He has great respect for the theoretical underpinnings of data science, while still appreciating the practical considerations required to handle real world problems. He's always happy to discuss all things data!
View all posts by Paul Ton >

cessiobby August 31, 2019
The cleaning company performs cleaning of rooms of different sizes as well as setups. The business's specialists provide cleansing with the aid of contemporary innovations, have unique equipment, as well as also have licensed detergents in their collection. In addition to the above benefits, wines supply: positive rates; cleaning in a short time; top quality outcomes; more than 100 favorable reviews. Cleansing workplaces will certainly aid keep your work environment in order for the most productive job. Any kind of company is very essential atmosphere in the team. Cleaning up services that can be purchased cheaply currently can help to prepare it and offer a comfy room for labor. If necessary, we leave cleaning up the cooking area 2-3 hrs after positioning the order. You obtain cleaning up immediately. We offer expert maid services for exclusive clients. Using European devices as well as accredited devices, we accomplish optimal outcomes and also give cleaning in a short time. We provide discounts for those that use the solution for the first time, as well as beneficial terms of collaboration for routine clients. Our friendly team provides you to obtain familiarized with beneficial regards to teamwork for company clients. We properly approach our tasks, clean using specialist cleaning items and also specialized tools. Our employees are trained, have medical publications as well as recognize with the subtleties of getting rid of complex as well as hard-to-remove dust from surfaces. We supply high-quality cleaning for big business as well as small firms of various directions, with a price cut of approximately 25%.