In a world full of deals and coupons, have you ever wondered which deals are actually good deals?

Anyone familiar with consumer psychology can tell you that people love deals. Those huge, red signs saying "30% off" or "Buy 1 Get 1 Free" are very attractive to consumers. So much so that many companies are having sale items all year round.

Dealmoon.com is very similar to groupon.com, where it gathers information of deals and coupons from merchants in the U.S., and groups them into different categories (e.g. Clothing, Electronics, Baby, etc.). All information are available on their website for free.

I used the Selenium package in Python to scrape all data.

Some logistics about the data I scraped:

For me, when I try to find good deals I always check the popular deals––deals with a lot of bookmarks and comments. My rationale is that if a deal has high popularity, it must be good; the chance of a group of people bookmarking a bad deal is low. Under this assumption, I first explored the popular deals. 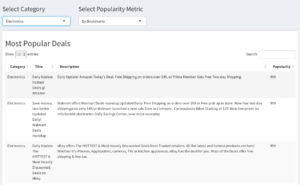 To take into consideration that maybe not everyone defines popularity the same way, the App allows the users to define "popularity" by whichever metric they like: the number of bookmarks, the number of comments, or both.

By now, you know enough about the functionality of this app to explore this topic on your own, my dear reader. Find the link to the app at the end of this post, and find out which stores always have good deals. You may be surprised! 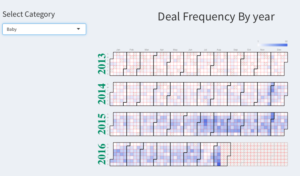 All the above-mentioned visualisations will help us understand which deals are good deals and which stores always have good deals. However, one drawback of this analysis is that they are all post-hoc analyses––they will only inform users which deals they should take advantage of AFTER other users have used the deal. By then, it may be too late: the deal is no longer valid or the item has been sold out. Therefore, in order to fully take advantage of past deals, one approach is to use Natural Language Processing to extract patterns of previous good deals to help classify new deals to be good or bad in real time.

All code used to generate the App can be found on my Github.