This post is about the second of the four projects we are supposed to deliver at the NYC Data Science Academy Data Science Bootcamp program. This is a web scraping project.

U.S. Foreign assistance has always had the twofold purpose of furthering America's interests while improving lives in the developing world.  USAID carries out U.S. Foreign policy by promoting broad-scale human progress at the same time it expands stable, free societies, creates markets and trade partners for the United States, and fosters good will abroad.

Spending less than 1 percent of the total federal budget, USAID works in over 100 countries to:

The Foreign assistance data can be found on the Foreign Aid Explorer. We can view data by recipient country, by sector, and by federal agency. The complete data, containing about 900,000 observations, is available for download from the website. But, as this is a web scraping project, I scraped a part of the data, required for my analysis, from the query page.

About my Web Scraping Project:

The actual content of the web page is loaded with a heavy JavaScript implementation (HTML structure and URL are the same for all pages no matter how you navigate or filter). I used Python with Selenium and Beautiful Soup to scrape the web page. The page took a minimum of 45 seconds to completely load. So, I had to set the initial idle time to 90 seconds. Within this time, I selected the required regions, the transaction type as ‘Disbursements’ and applied filters. There were about 8,700 rows (observations). I set 100 rows per page, which resulted in 87 pages. The code is written in such a way that it gives a pause of about 1 to 1.5 minutes for each page in order to avoid overloading of the server and not get banned from the server. At the bottom of each page, a "Next" button will be available to view the next page. I wrote code to automatically move on to the next page, without manual interruptions. I encountered the problem however that, even after reaching the last page, the "Next" button would still work and the script would scrap the last page repeatedly, if unnoticed. To accommodate for this, I changed my code so that, it would move on to the next page, only if the current page was not the last page; otherwise, the website should be closed.

The eighty-seven pages were scraped continuously for 1.5 hours, without manual interruptions. Each column was saved as a list, simultaneously and once scraping was over, I converted them into a data frame. Then, I set the transaction type as 'Obligations' and used the same techniques to scrape all the 84 pages, which also lasted for about 1.5 hours. It was saved in another data frame. As mentioned before, the entire data consisted of about 9,000 pages, which would have accounted for about 9,000 minutes or 6 complete days. I therefore only scraped a part of the data, because of the time constraint.

Before converting to CSV, I had to do some cleaning. I continued coding in Python. Before starting the cleaning, I concatenated the two data frames into a single data frame, including a new column, 'Transaction_type'. The resulting data frame had about 17,200 observations and eight columns.

The 'Current_amount' column had dollar symbol and commas. First, I removed all the symbols from the column and converted it into a numeric column. Then, there were some negative amounts (de-obligations). As it was given that the de-obligations were given for another purpose and not be accounted in total, I made all the negative amounts to zero. With that all cleaning done, I converted the resulting data frame into a CSV file and stored it in my local directory.

As I wanted to visualize the whole data in an interactive app, I decided to build the scraped portion first as an app for this project and then update it later on. I switched on to R and Shiny Dashboard to visualize and develop the data as an app.

An aid 'activity' can be a project, a program, cash transfer, delivery of goods, a training course, a research project, a debt relief operation, or a contribution to an international organization.

An aid 'financial flow' most commonly takes the form of an 'obligation' (a binding agreement, based on budgeted resources, which will result in outlays) or a 'disbursement' (an amount paid by federal agencies, by cash or cash equivalent, to settle government obligations).

An accounting period of 365 days (366 in leap years), but not necessarily starting on January 1. The fiscal year of the United States Government begins on October 1 and ends on September 30 and is designated by the calendar year in which it ends for global programs.

The agency which actually obligates and disburses the U.S. Foreign assistance, either directly or via an implementing partner entity. The implementing agency for a foreign aid activity may or may not differ from the appropriated (funding) agency.

Region: This is the specific target beneficiary of U.S. Foreign assistance. A 'country' listed on the Foreign Aid Explorer website is either an entity named and classified as an "Independent State" by the U.S. Department of State, or a geographic regional recipient with the suffix "Region".

On the 'Data Query' section, foreign aid benefiting multiple countries may be assigned to either a 'Region' recipient or to 'World‘.

I have employed the first case of 'region', i.e., non-country-specific recipients, for this project.

From this survey, it could be understood that people are not aware of USAID. This app may play a small part to explain what is actually happening.

When I read the term, 'non-country-specific recipients',  I had many questions running through my mind:

These were my questions of interest. I had scraped data from USAID for seventeen years from 2001 to  2017. It is given in the website that the data for the fiscal year 2017 is incomplete. However, they had obligated the budget, so, I also included that year. In order to get answer for my first three questions, I started my analysis from the 'Activity' column utilizing the dplyr package in R.

The regions (non-country-specific recipients) considered for this project are:

I mention below some of the common activities which I observed in all the regions:

But there are some highlight programs, which made me raise my eyes:

I then started to analyze my last three questions. I used R and the packages, ggplot2, plotly and Shiny for analysis and visualization.

I did the visualization of the data in Shiny, which is an open source R package that provides an elegant and powerful web framework for building web applications using R. Shiny helps you turn your analyses into interactive web applications. Furthermore, I used Shiny Dashboard to create a management dashboard-like application.

I grouped the aid into two categories, one by regions (non-country-specific recipients) and the other by sectors. 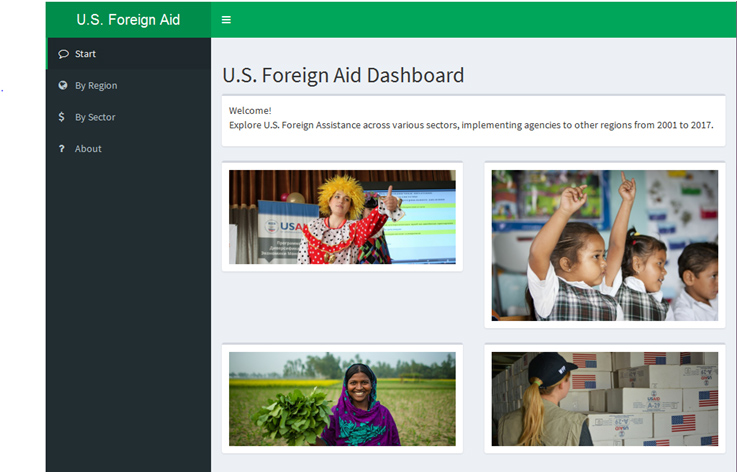 Let us discuss them in detail.

This tab gives information about how much amount of USD has been obligated and disbursed for each region from 2001 to 2017. Two select boxes are available, one to select the region and the other to select the year.

First, line charts are used to display the disbursements for seventeen years from 2001 to 2017 to the selected region. The green dot represents the amount for the selected year. In this case, one more check box is available for users to interact with. If the check box is selected, the line graph for the obligations will also be displayed, which enables users to check if the amounts have been disbursed as per the plan (obligations) or not.

Second, bar charts have been employed to display the top sectors,  in which amounts of more than $100,000 have been disbursed to the selected region. Three years will be shown, where the first is the selected, and the others are 2011, 2016, for comparison. If the data is not available for a particular year, then the bar chart for the corresponding year will not be displayed. 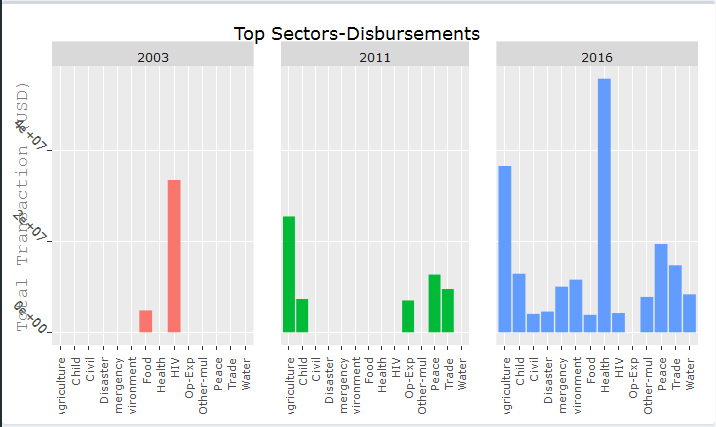 Again, bar charts are employed to display the top fundamental agencies, which have disbursed amounts above $100,000 to the selected region. In this case also, the bar charts display three years' information, as discussed above. 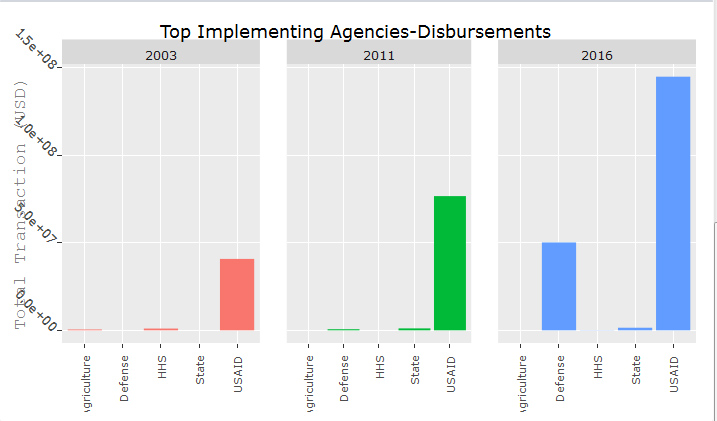 Observations of Region-wise Disbursements in 2016:

Observations from Comparison of Region-wise Obligations and Disbursements Line Graphs  for seventeen years:

This tab gives information about how many USD have been obligated and disbursed in each sector from 2001 to 2017.  Two select boxes are available here as well, one, to select the sector and the other, to select the year.

First, line charts are used to display the disbursements for seventeen years in the selected sector from 2001 to 2017.  The amount for the selected year will be highlighted. In this case, one more check box is available to display the line graph for the obligations. The users can compare and check if the amounts have been disbursed as planned (obligations) or not.

Second, bar charts have been employed to display the top regions for which the amounts of more than $100,000 have been disbursed in the selected sector. Three years will be shown, where the first is the selected, and the others are 2011, 2016, for comparison. If the data is not available for a particular year, then the bar chart for the corresponding year will not be displayed. 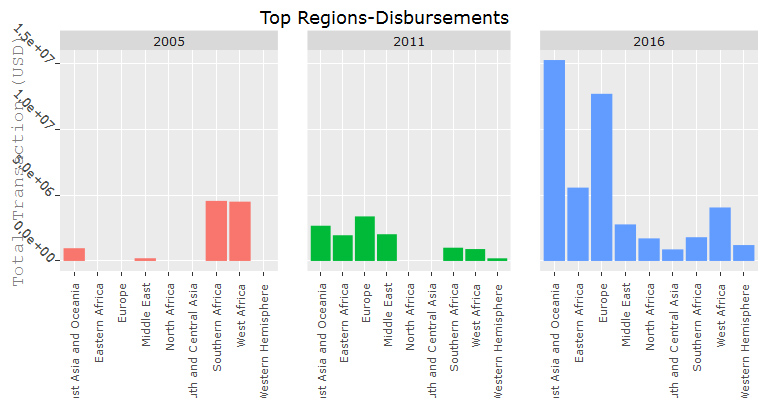 Again, bar charts are employed to give information about the top fundamental agencies, which have disbursed amounts of more than $100,000 in the selected sector. The bar charts display three years' information, as discussed above.

An oscillating trend has been observed in other sectors.

“The purpose of foreign aid is to end the need for its existence”– Mark Green, USAID Administrator. I too hope for the best. 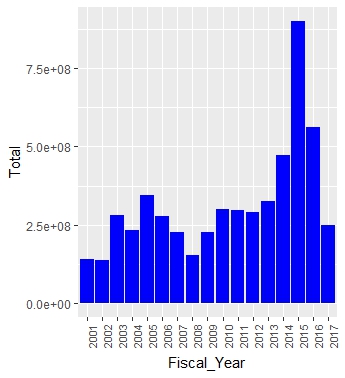 This puts forth the following future directions:

The FY 2019 President’s Budget for the State Department and USAID is $39.3 billion.

Analysis of the trend to predict, if, during President Trump’s period,

The data set provided a great way to apply Selenium and Beautiful Soup. It was an unforgettable experience to work on this web scraping project. Thanks to NYC Data Science Academy for providing me a wonderful opportunity to work with Selenium, Beautiful Soup, Python, ggplot2, plotly and Shiny Dashboard.

Code and data can be found on GitHub, while the app itself is online at shinyapps.io