Wisconsin State Police Stops: How Choices in Madison have led to Missing Racial Data and Other Outcomes

According to the Bureau of Justice Statistics, 42% of all face-to-face interactions between U.S. residents and police officers were through traffic stops. Getting pulled over is a nearly ubiquitous American experience, and each stop can lead to a number of possible outcomes - a warning, ticket, license suspension, search, arrest, or -- in rare cases -- death.

While certain arrest, sentencing, and imprisonment information has been collected and made publicly available for centuries, traffic stop data en masse is a fairly recent development. Civil rights advocacy groups are to thank for this step toward transparency. Their efforts, and others', to uncover and counter racial bias in the U.S. law enforcement and criminal justice system have been and continue to be important.

The scope of this study is limited. We looks at two trends observed in data collected by Wisconsin State Patrol troopers during traffic stops from 2011 - 2015, in particular missing racial data in 2014 and 2015 and monthly seasonal trends. If the races of drivers stopped by police are not recorded, everyone loses. The public continues to lose trust in opaque enforcement practices. Police officers lose the standing on which decision makers could make positive, institutional changes and weed out bad apples. We also look at monthly stop trends and potential drivers.

This exercise does not attempt to identify the existence of or quantify racial bias among police officers in Wisconsin.

If you would like to learn more about racism and discrimination in the U.S. criminal justice system, here are two places to start:

The New Jim Crow: Mass Incarceration in the Age of Colorblindness by Michelle Alexander

This project uses the dataset of all traffic stops made by the Wisconsin State Patrol from January 1, 2011 - December 31, 2015. The data was made publicly available by the State of Wisconsin's Department of Transportation and collated by The Stanford Open Policing Project here.

The dataset contains variables including:

Timeline of Wisconsin state-level public policies related to the collection of data on the race of drivers stopped by state law enforcement.

In November 1999, Governor Tommy Thompson (R) created a Task Force on Racial Profiling - charging the Task Force with the responsibility of studying and making recommendations on the use of profiling when conducting traffic stops in Wisconsin.

The extent of racial profiling cannot be determined without empirical study and comprehensive analysis. The Task Force and experts agree that data collection is an appropriate component for addressing racial profiling and is a component in effective management which can help build accountability and protect the integrity of law enforcement agencies and personnel...

Based on information from national and local experts, it is strongly recommended that law enforcement agencies collect the necessary data to address racial profiling in an organized manner that permits the development of meaningful and useful information.

In February 2008, the Commission on Reducing Racial Disparities in the Wisconsin Justice System issues its final report, recommending that “appropriate state agencies should be directed to conduct a county-by county baseline study of racial disparity using existing traffic citation and arrest data to determine disparity levels in the state.”

In June 2009, the Wisconsin legislature (controlled by Democrats) adopted these recommendations (requiring all Wisconsin law enforcement officers to record and report racial and ethnic information about people they detain in traffic stops.

In May 2011, Wisconsin law enforcement was no longer required to collect the race or ethnicity of people stopped.

Legislation requiring law enforcement officials to record the race of the driver in each traffic stop led to the creation of this dataset. Wisconsin State Patrol troopers were first required to collect this information in January 2011. The requirement was lifted in May 2011, but troopers continued to report the race of drivers stopped, as well as the other variables listed above.

Line graphs allow us to analyze the collection of race data over time. This graph shows the number of drivers stopped by race from 2011 - 2015, including the number of observations missing a driver race variable. State Patrol troopers continued to record the race of drivers stopped beyond May 2011. We only see a noticeable uptick in missing race observations (pink line) around September/October 2014, which then exceeds White drivers (yellow line) as the most common response in December 2014. Missingness continues throughout 2015. 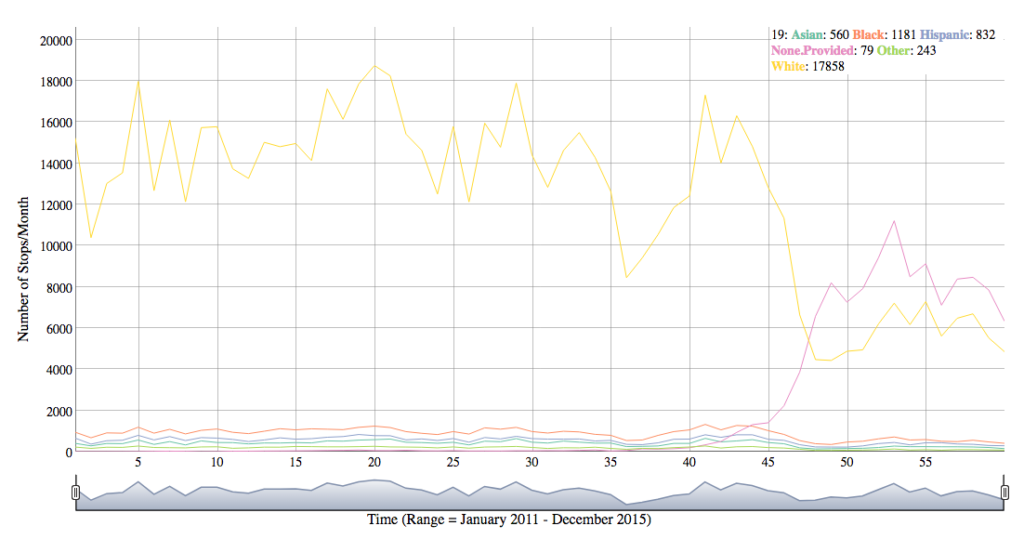 The May 2011 repeal of Wisconsin's data collection requirement did not lead to an immediate decrease in recorded race data. Rather, it happened three years later, and not so gradually.

How should we interpret this delayed response to policy changes? Older troopers could have been used to collecting racial data and just continued to do so past the required date. As newer troopers replace the old dogs, institutional habits are lost, and the amount of racial data collected may slowly decline. This explanation is inconsistent with the steady collection of race data from 2011 through mid-2014 and sudden increase in missingness in late-2014.

Since drivers' racial information is collected by individual troopers, not by the State Patrol department itself, per se, we take a further look at how each officer records the race of drivers he pulls over. This dataset includes the unique ID of the trooper involved with each traffic stop. We use this to look at each individual trooper, each month, and calculate the percentage of his stops for which he recorded the race of the driver.

The density plot below shows the number of troopers who had 0% - 5% missing driver race observations each month, 6-10% missing, 11-15% missing, and so on up to 96-100% missing. Lighter areas mean more troopers had that percentage of missing race data in that given month. We see that a vast majority of troopers had 0-5% missing race observations from 2011 through late 2014, as expected. Beginning in late 2014, we see a divergence; troopers either record the driver's race for nearly all stops or hardly any stops. That accounts for the light blue high-density areas at the top and bottom of the graph and a low density of points in the middle. 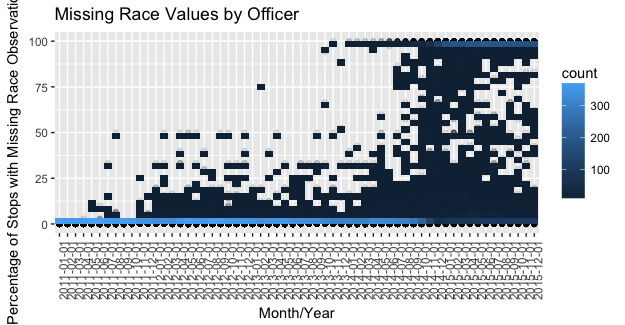 I am not in the business of speculation, but these observations suggest a systemic institutional change in late 2014 independent of the May 2011 removal of the legal requirement of troopers to record the race of drivers stopped. Further investigation could explore potential drivers.

At what times of the year are drivers more likely to be pulled over in Wisconsin?

By aggregating the total number of drivers stopped each month from January 2011 through December 2015, we can search for seasonal trends. A quick look at the bar graph below shows that May is a particularly busy month for the State Patrol. May saw the most traffic stops for 4 out of 5 years. Each year saw a slight dip in June, followed by a spike in late summer and a larger end-of-year drop in December. December had the fewest traffic stops for 3 out of 5 years. 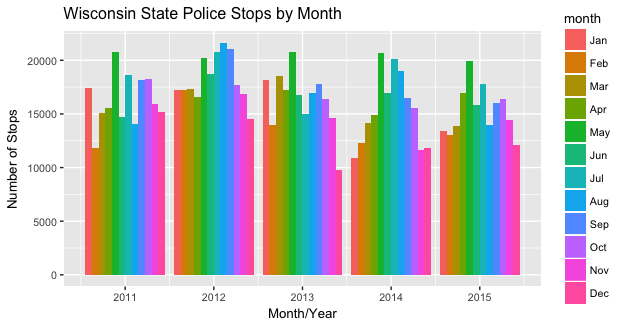 Seasonality in traffic stops could be explained by a number of factors. Weather could play a role; more people are on the roads when it's nice out. Milwaukee Decembers typically see an average temperature between 19 and 33 degrees. The last snowfall of the year can land as late as late May, meaning May and June are the first couple months when folks can roam (and drive) outdoors without snow boots.

Another theory for traffic stop seasonality in Wisconsin rests on the State Patrol's financial incentives - meeting fee/fine targets each year. Wisconsin's fiscal year end is June 30th. May could be the unofficial "catch-up" month for the State Patrol to meet its yearly fee income targets. Individual officers may also be incentivized to make more traffic stops near the state's fiscal year end. In October 2015, the Wisconsin Law Enforcement Association, the union for State Patrol troopers, sued the State Patrol for evaluating trooper performance in certain areas of the state based on quotas. The union alleged that the State Patrol instituted quotas of one traffic stop per hour of patrol, one citation per 1.8 hours of patrol, and one warning per 0.8 hours of patrol in the state's southern region. A state law passed in 1999 bars Wisconsin state agencies from requiring quotas for enforcement of traffic laws. As most employees are evaluated near their organization's fiscal year end - troopers may be under more pressure to make up for negative quota differentials late in the year, in May and June.

Please feel free to poke around with this RShiny app I made to explore these two issues found using the Wisconsin police stop dataset.

Law enforcement datasets can be used in certain cases to analyze the outcomes of one-off public policy initiatives and other institutional characteristics of police departments. A decline in racial data collection from traffic stops following the 2011 Republican-backed appeal of the collection mandate was predictable. The speed and timing of this decline was less predictable, likely due to an internal directive only affecting a portion of State Patrol troopers. I hope further analysis can lead to a policy reversal - increased transparency and accountability prevents powerful institutions from repeating past mistakes. Likewise, a brief look at seasonal trends can lead to discussions on the financial incentives placed on troopers to meet quotas.

Most importantly, we should recognize that trends in law enforcement behavior are not always externally driven. Some are attributable to internal characteristics, including public policy changes, budgetary issues, and systemic racism. Analyzing these enforcement outcomes can further the government's understanding of how its internal workings may be positively or negatively affecting the people it serves.

I put together an RShiny app that helps visualize these findings - you can find it here.

Patrick graduated from Wesleyan University with a bachelor's degree in Mathematics and Economics. After graduation, he worked in regulatory consulting for two years, primarily with traditional buyout private equity and quantitative trading firms. Patrick enrolled in NYCDSA to...
View all posts by Patrick Masi-Phelps >