The National Park Service is responsible for preserving the ecological communities found in our country’s national parks. The agency oversees 59 parks found throughout the country.  They maintain a running species list that is updated with all species that have been observed in each park.  The species list also includes data such as, taxonomic information and various characteristics about the species observed.  As someone who enjoys exploring these parks, I thought it would be helpful to create a tool that would allow someone to learn more about our parks and the species that inhabit them.

The first function of the app is that is allows a user to visualize which parks a species is found in. This allows the user to infer the range that that species inhabits.  It also shows the user what parks they should go to if they want to see a particular species.  The page shows the user a species’ scientific name and its conservation status. 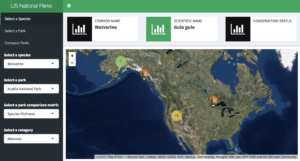 The second function of the app is that is allows a user to learn about the characteristics of a particular park.  After the user selects a park, the user can see the size, species richness and species density of that park.  In addition to that information, the user is also provided with the number of species in each category in that park.

The third function of the app is to provide the user with information to compare parks.  The user can either select a category (for example, Mammal) or it can select a metric.  If the user selects a category, it will show the 15 parks with the largest number of species in that category in descending order.  If the user selects a metric, it will show the user the 15 parks with the largest value for that metric in descending order.  The possible choices for the metric are species richness, species density, total acreage and the number of endangered species.

In conclusion, this app should prove useful to anyone hoping to learn more about our country’s national parks and the species that live there.  I found the experience of building this app to be rewarding and enlightening.  That being said, the app could be developed further to provide the user with more in-depth analysis.