A closer look on the effects of the Lending Club Scandal

Introduction - An overview of Lending Club

Lending Club is an online platform that connects borrowers and lenders. It enables borrowers to create unsecured personal loans of up to $40,000 on either a 3-year or 5-year term. Investors can then browse loan listings on the website and select loans they want to invest in based on a myriad of variables such as amount of loan, purpose of loan, loan grade, fico score etc.

Why are borrowers using lending club instead of traditional banks? Lending Club tends to offer lower rates than what the market would provide. As seen in the world cloud below, it is common for borrowers to use these loans to consolidate debts.

Like most secondary marketplaces, lending club profits by charging a “middle-man” fee for screening borrowers, facilitating transactions, and servicing loans. Since its establishment in 2007, lending club has revolutionized personal loans in the US and is the world’s largest peer to peer (P2P) lending platform. The company raised $1 billion in what became the largest technology IPO of 2014 in the US. P2P is a new business model and like most business models, it has to be tested, it has to go through some issues and come out well on the other side. In early 2016, lending club was involved in a scandal over some of the firm’s loans and concerns by the board over CEO Renaud Lepanche’s disclosure leading to a large drop in its share price and the CEO’s resignation.

This led me to explore how loans have changed through lending club’s growth and their outlook post-scandal.

The data used for this analysis includes all of lending club’s released data from 2007 up to 2017 Q2 -- approximately 1.5 millions rows and 140 columns (of which 110 columns were removed for processing purposes).

To explore this issue, we must first understand the basics and how Lending Club works. Lending club assigns grades to loans as an indicator of risk. Grade A is considered to be the safest or least risk, while Grade G loans have the most risk. As witnessed below, interest rates increase proportionally over sub-grades and there isn’t too much overlap between their interest rate density distributions. Both of these charts show that Lending Club seems to have a consistent model across loan grades.

Now that we have an understanding of how lending club’s model works, we can look at changes in their business over time. Geographically, California consistently has the highest loaned amount from 2008 onward. Coincidentally, Lending Club is headquartered in California. In recent years, Hawaii has had some of the highest interest rates, however, as a whole, interest rates seem to be volatile from year to year . Overall, both loan amounts and interest rates seem to be converging toward uniformity -- a good sign for any business.

Next, we look at how interest rates have changed over time across loan various loan grades. The safer loans -- Grades A,B,C seem to be relatively consistent. However, as you can see, interest rates have been rising for the riskier grades, as high as 30%!

We also look at how loan amounts have changed over the years, a good indicator of lending club’s growth. They have consistent and stable growth from 2007 to 2014. While they do see incredible growth Post-IPO, there is also great deal of volatility.

We have to dig deeper into this volatility to identify the scandal. Looking at the monthly distribution across years, we see that prior to 2016, July and October have seen consistent jumps in loan amount, likely due to holiday seasons. However, 2016 saw an abnormal spike in 1st quarter, specifically in March - the month of the scandal. In fact the difference between March and the second highest month in terms of loan amounts (Oct 2015), is nearly the amount of loan amount involved in the scandal -- $145 million.

Finally to get an idea of where lending club is heading, we take a look at trends in default rates. Default rates are final once loans are completed. Lending Club offers 2 types of loans: 3-year term and 5-year term. Default rates for 3-year term after 2014 are not finalized as these loans have not completed their term. Similarly, for 5-year terms we have final default rates up to 2012. For example, if we invested in 1000 loans with a 3-year term initiated in 2015, payments will be made until 2018. Therefore the current default rates on those loans will only go higher as loans could potentially default in late 2017 and 2018.

The first thing that stands out is loans with a 5-year term have a higher default rate than 3-year term. Also as expected, default rates are higher as grades get riskier for both terms. The safer loans (grades A,B,C) seem to have consistent default rates but the riskier grades (E,F,G) are trending toward higher default rates. This is a sign of concern and I believe lending club has also noticed this trend as they are increasing interest rates for these grades. 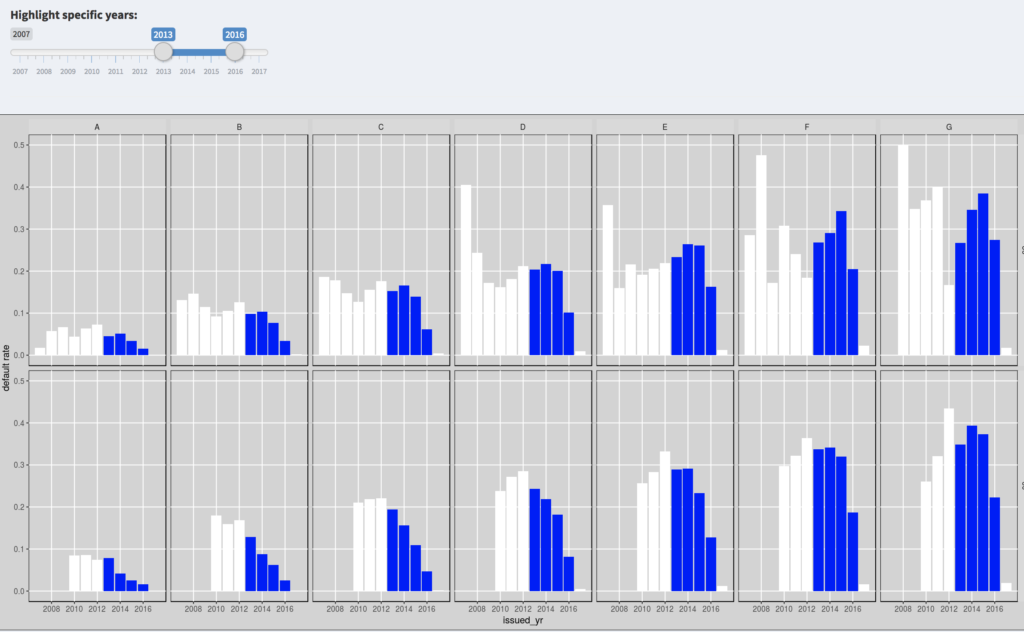 Another sign of concern is that default rates are already high for years that we do not have finalized default rates for such as 2015 - 2017. For example in 2015 , Grade F and G for 3-year term have the highest default rate more than any prior year and this number will only go up as these loans have not completed their term.

Lending Club’s credit rating model seems to be consistent over various factors and allows investors to choose their risk level accurately. After the 2016 scandal and the CEO’s resignation, we noticed a dip in investments, but their investor base remained confident and investments have bounced back.

While Lending club is offering interest rates higher than ever before, one should be cautious over investing in loans on Lending Club, especially for riskier investments (Grades D through G). Default rates have been increasing. Perhaps, lending club is accepting riskier borrowers increasing default rates, but also offering higher interest rates than ever before to account for these default rates and to attract more investors.  Now, more so than ever before, the investor must look at the variables linked to a loan to differentiate the good investments from the bad. Due to high interest rates on riskier loans (grades D,E,F,G), there is a lot of value and opportunity if one is able to identify the correct loans. The next step in this analysis could be to take a deeper dive into these riskier grades to identify patterns or trends that an investor can take advantage of to increase their bottom line numbers.

Check out the shiny app here. The details of the code can be found here.

View all posts by Shubh Varma >