Retail Banking is a provision of the services by banks to an individual consumer. Such services offered include savings/transaction accounts, mortgages, personal loans, and credit/debit cards. It is a very competitive business.
One of the biggest challenges the business faces is figuring out how to identify condumers who are most likely to do business with it and target those who have suitable needs to sign up for its services. Because of that, the marketing of services plays a vital role in winning customers over.

In this study, we have implemented multiple muchine learning algorithms on a marketing data set of an European retail bank. The goal is to understand the important factors on short-term deposit account sign-ups and to develop a strategy to help banks focus on those most promising leads in order to win them over.

The data set used here is from UCI machine learning repository. It is derived from the direct marketing campaigns of a Portuguese banking institution. The marketing campaigns were based on phone calls. Often, more than one contact to the same client was required, in order to access if the product (bank term deposit) would be ('yes') or would not be('no') subscribed.

The following categories of information are included in the data set:

Consumer data: Age, sex, job and marital status, education, loan status, and so on.
Campaign activities: When and how to contact, times to contact, outcome of previous campaigns.
Social and economic environment data: Euribor 3 month rate, employment variation rate, consumer price index, and
consumer confidence index.
Outcome:  A 'yes' for the bank if there is a term deposit subscribed, a 'no' for the other outcome. 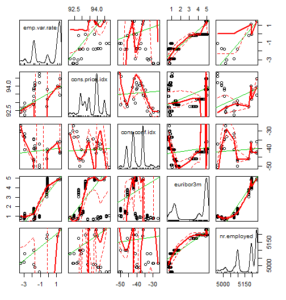 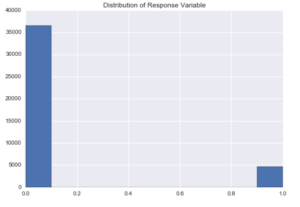 The plot on response variable shows highly unbalanced distribution of its binary classes. The relationships between the economic data are non-linear. Economic data is not normally distributed. In order to fit machine learning algorithms, all the categorical variables and response variable are encoded into numerical levels.

This data set also contains missing data on one numerical feature: pdays. This feature indicates the number of days that passed by after the client was last contacted from a previous campaign- it was coded as '999' if the contact never happened. Over 90% of the records show a number missing for the pdays. In order to implement the machine learning algorthms, we need to imput the missing values of this feature in a way to maximize its prediction accuracy.

In the study, we tested the following appraches with the Logistic Regression algorithm:

Since the result shows the highest prediction accuracy on the first apprach. we will keep the data as it is in the rest of study.

The Models and Model Optimizations

In order to meet the goal set up above, we need to develop a classification model with a balanced ability of giving correct prediction on both consumer sign-ups and no sign-ups. This model is considered as suitable since it can help marketing personnel to focus on those promising leads and reduce or eliminate effort on those who are unlikely to conduct business with them.  To develop such model, we implemented: 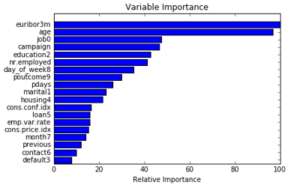 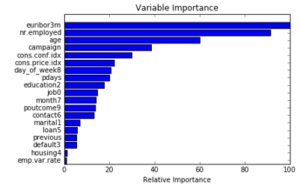 In this study, we have applied machine learning techniques to retail bank marketing data and explored how the techniques can be used to help  the bank to conduct its marketing campaign: